This weekend, half in preparation for the Horrible Night Summit and half because my Gamer Resolution of the Year was to play games outside of my comfort zone, I picked up quite a few games off of a section of Xbox Live that I hadn’t previously known existed: XBL Indie Games (yes, that’s embarrassing to admit).  I haven’t gotten through all of them (a lot of the games are a measly 80 Gamer Points), but there were some stinkers and there were some very pleasant surprises of which Bird Assassin was one.

Just 'cause a dinosaur dresses up like Cee Lo don't mean I won't kill it.

If you’re looking for depth or a convoluted plot line, this isn’t the game for you.  Bird Assassin knows exactly what it is and sticks to it – it’s a side scrolling shooter with more than a dash of absurdity and a big helping of fun poked at Trailer Park Trash. (Trailer Park Trash ≠ Living in a Trailer; Kid Rock is Trailer Park Trash and has a mansion or two).  Gameplay wise, it’s simple – walk to the right, aim up and down (and occasionally left), jump over the sticker bushes and bear traps and blast pigeons, ducks, geese, kamikaze doves, owls, turkeys, chickens and explosive-vest wearing chickens into piles of bloody goo.  If you’re the kind of gamer that, for some reason, needs a protagonist to have a motive here you go:

My Motivation by Redneck Protagonist: A .44 Magnum toting Ostrich snuck up on my wheelchair-bound, IV-drip-receiving Pappy and blew his head off.  Pappy’s ghost told me to take vengance on birds of all kind, whether they walk or fly.  The end.

A dinosaur dressed in plumage smoking your beloved daddy with a hand-cannon should be ample motivation to commit avicide on a scale not seen since the last passenger pigeon was extinctified.  (If former president George W. Bush can say “strategery,” I can verb extinct into “extinctified.”)  Need more?  Fine.  You can do it using armor piercing bullets fired from a M-134 Electrically Driven Minigun.  If that’s not enough, I can’t help you.

Brass-tacks wise, this is a cell-shaded shooter with simple, mostly responsive controls (jumping leaves something to be desired, but, hey, he’s a fat redneck), amusing one-liners, a shop to upgrade your weapons between levels called Gun Mart and a strictly linear game structure with a world map reminiscent of Super Mario 3.  I beat it in one sitting on normal difficulty in about 2 hours, although if you weren’t as anal retentive as I was about re-doing levels to get the maximum amount of cash to get bigger guns, you could probably do it faster.  Replay value isn’t terribly high unless you’re into killing as many birds as possible. 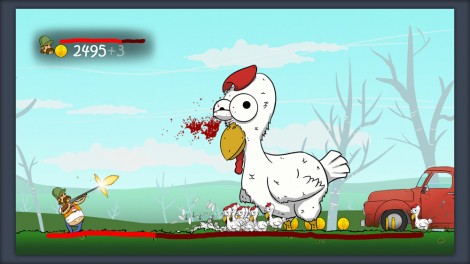 Although it’s unlikely that I’m going to revist Bird Assassin anytime soon (partially since Indie Games aren’t given Achievements), I will be on the lookout for more from Social Loner Studios and would recommend Bird Assassin to everyone except PETA board members and younger children – the game is very bloody but in a cartoony way, so, parents, don’t say I didn’t let you know ahead of time.