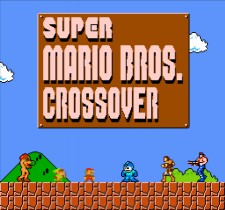 If you’ve ever been to Newgrounds, you know that there are many great time wasting flash games to be played. But the one created by explodingRabbit, might be the greatest of them all.

Have you ever dreamt of playing Super Mario Bros. with other famous 8-bit characters? Well now is your chance. Super Mario Crossover allows you to play as some of the greatest characters of all time: Simon Belmont, Samus Aran, Link, Mega Man and Bill from Contra. The best part about playing as those characters is the fact that they are controlled like they would be if in their own game.

Each character has their own special abilities when consuming the regular Mario power-ups. When Bill eats a fire flower, he gets the spread gun. If Mega Man eats a mushroom he gets to put his helmet on and have a charge blast.

The music is also very well done. If you select Link World 1-1 will give you the famous over world theme from Legend of Zelda. On World 1-2 that music switches to the palace music of Zelda II: The Adventure of Link.  Subtle but way cool. Clearly, a lot of effort went into this game.

Head on over to explodingRabbit’s page at Newgrounds and play the greatest Super Mario Bros. flash game ever created.