The Cold War Era was a time in our history defined by fear, paranoia and the lingering threat of nuclear holocaust.  Fortunately for us, a group of hard nosed special operations soldiers were secretly raining hurt on the big red machine in all sorts of Michael Bay inspired ways.

Call of Duty: Black Ops tells the tale of  Alex Mason, a black ops soldier that appears to be the love child of John Matrix from Commando and John Mclane from Die Hard.  When we first meat Alex he’s tied to a chair in an interrogation room, not exactly the place you’d expect to start off in a Call of Duty title. A barrage of questions are being thrown his way by an unidentified man with a deep sultry voice and we’re suddenly introduced to the flash back themed story telling mechanic of the game. Yes, Call of Duty: Black Ops is a giant clip show but that’s not to say it’s bad, especially since it’s clips of events no one has ever seen. 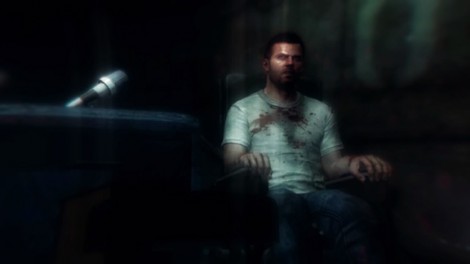 As the story unfolds, you flash between scenes of Alex’s interrogation and the events he’s being questioned about. From a mad rush through Castro’s compound in Cuba, to the sweaty jungles of Vietnam and everything in between, the action is a globetrotting punch to the gut that never stops. In addition the the varied settings, Alex’s exploits are intermixed with the experience of some other major characters, thus filling in important aspects of the story that he wasn’t privy to. The flashback mechanic works well and the pace feels appropriate if not a bit over the top. There’s a surplus of explosions and chase scenes throughout and the set piece battles tend to be quite formulaic and very scripted.

She may not be smart, but she’s really pretty

Black Ops is a very good looking game, which should come as no surprise to anyone. Action is smooth and the graphics are crisp and well detailed. There’s a lot going on at any given time and it’s easy to get distracted with all the crazy crap going on around you. Like most the titles in the series though, Black Ops walks the line between first person shooter and on rails light gun game. You do have complete control over your character’s movement, but the game play flows in a very straight forward path and there’s not much room for tactical variations… and I love tactical variations. 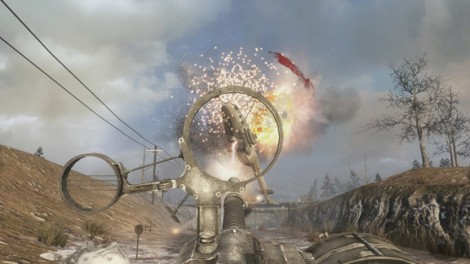 Helicopters do not fare well throughout the story

Your combat choices basically come down to killing bad guys with either bullets or explosions.  The AI can be incredibly stupid as well in both enemy and ally behavior and at times I felt like I was in a carnival shooting gallery. It’s all a bit tough to stomach, especially after playing Fallout: New Vegas for the last few weeks. Despite these issues, it is still a fun time to be had, especially since I’m a sucker for military themed fare.

I’ll digress on the topic of single player as everyone knows that Call of Duty games are all about taking the fight online. Black Ops took an already strong multiplayer formula and improved on it, thus enhancing the addictive qualities of Modern Warfare 2. The leveling system is still there, along with the usual game play modes and weapons customization but the addition of a monetary system take the game to a new level.

Money, like experience is earned by completing matches, but a few additions to the formula give players a ton of incentive to keep playing.  The challenges are back from Modern Warfare 2, which reward players for completing certain tasks or using a certain weapon but the addition of contracts allows players to essentially bet on whether or not they can complete those tasks in a certain amount of time. For instance, the Hired Gun contract costs 25.00 and requires that a player get 3 kills without dying. Completion of this contract nets the player money, in this case 150.00. The contracts range from simple tasks like the one mentioned above, to much harder goals such as 25 kills in a match and the higher the stakes the higher the reward.

Another way to earn money is by playing wager matches, a new addition to the Call of Duty franchise. Players put up a certain amount of money at the beginning of the match and the top 3 bring home the winnings, kind of like in poker.  There are certain constraints put on these matches, such as constantly rotating weapons or guns with a single bullet, and items/ perks earned in the multiplayer component don’t transfer over. It’s all about making the cheddar in this mode, and while it wasn’t my favorite I still liked the change of pace. 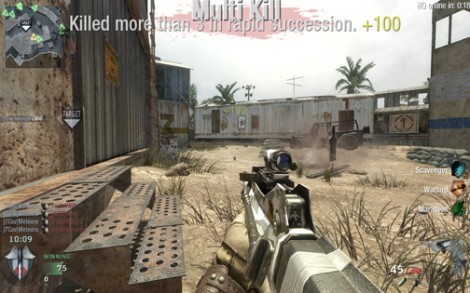 An achievement I may never get.

In the first game, items were acquired based on leveling, and meeting certain criteria such as getting head shots or kills unlocked attachments and higher leveled perks. In Black Ops, leveling gives players access to new weapons and gear, but money earned in matches is used to actually purchase the unlocked content. It’s much easier to get access to things like scopes, extended mags, etc because they are available for purchase once the weapon is unlocked. The perk system still requires meeting certain requirements to get the better pro perks, which is good because it prevents everyone from having access to the sometimes cheap enhanced versions.

It’s pretty easy to set your character up to best suite your play style in this game and it’s pretty similar to past Call of Duty titles.  There are lot of guns, attachments and other gear to choose from, my personal favorite being the mounted flamethrower. Kill streaks are still there, but the death streaks have been removed which I was happy about since no one should be rewarded for sucking. 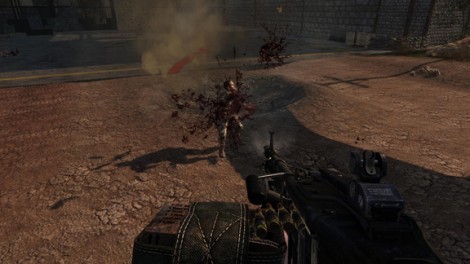 This guys gets no incentive for poor survival skills

On top of functional gear, currency can also be used to purchase items like face paint, gun camo and custom insignias. This is helpful to players that like to differentiate themselves from others and the level of customization found in creating insignias is pretty huge. I had a lot of fun designing my insignia and spent quite a bit of money and time doing so. None of these things change game play, but they do keep the player coming back for more.

If it ain’t broke, repackage and sell it again

Multiplayer remains unchanged form a game play perspective, so those that have been playing MW2 shouldn’t miss a beat. The game is easy to learn but difficult to master and newbies may be thrown into the deep end with veterans more so than they’d like. Balancing is pretty solid in team games, but it’d be nice if there was an optional matchmaking component that placed closer skilled players together, like the leagues found in StarCraft 2. Still, unless you’re allergic to getting your butt handed to you (which if you’re like me will happen a lot), it doesn’t detract from the experience. Level design is varied enough, but I definitely had some issues with a few of the larger darker levels. I think my sentiments are shared by others as a few maps get more consistent play time than others. 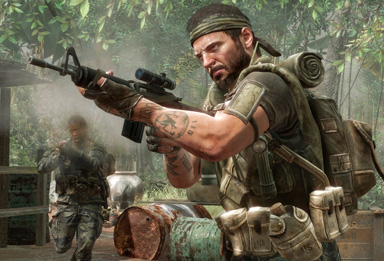 I was pleasantly surprised by Call of Duty: Black Ops and the deep multiplayer experience is complimented well by the simpler in your face single player story. There’s enough here to keep you playing for quite some time, or at least long enough for Activision to pop out another title (which will more than likely occur next fall).

Personal sidenote: While Call of Duty: Black Ops is mostly a work of fiction, the scenes depicted are based around actual events. War will always inspire entertainment, but that doesn’t mean we shouldn’t take those that were impacted  into consideration. People died and families were torn apart, so be sensitive to those who faced these adversities.