In December 2007, my friend and I were in Target doing some Christmas shopping for the women in our lives when we, like we always do, stopped in the electronics department to check out the video games. I remember seeing pictures of Call of Duty 4: Modern Warfare in a recent issue of Game Informer and thought that the game looked amazing, though I was reluctant to jump in because it was a FPS. It was a style of game that I wasn’t a huge fan of in the past. Then I saw the price of the game. It had been out for a couple of weeks by then and must have not been selling as well as it eventually did because it was listed for $37. Even if I didn’t like it, I could get behind a game at that price and so I bought myself a Christmas gift instead. That gift rekindled my love for the first person shooter genre and led me to where I’m at today: playing a ton of Halo: Reach. 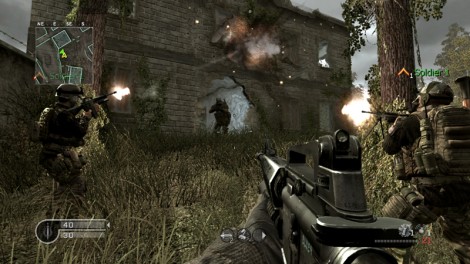 The game that got me back into first person shooters.

While Call of Duty 4: Modern Warfare got me back into the genre with a vengeance, Modern Warfare 2 is the standard bearer by which all military based first person shooters should follow. The road to Sci-Fi first person shooter glory is paved by Halo and it’s latest game Halo: Reach. It’s interesting to note that both Modern Warfare 2 and Halo: Reach were developed by studios who will no longer be working on either series. Infinity Ward, which developed both Modern Warfare games was gutted by the firing of it’s two creative directors and they have  moved on from their deal with Activision into a partnership with EA. The creator of the Halo series, Bungie, has moved on from their exclusive deal with Microsoft and has moved under Activision’s umbrella, seemingly taking the place of Infinity Ward.

The Story is Nice…

Like all most first person shooters, we come for the multiplayer and a solid single player experience can make the game that much more enjoyable. After beating Halo: Reach earlier this week, I was completely satisfied by the single player campaign just as I was when I finished Modern Warfare 2.

The proof is in the image. Absurd.

While the storyline in MW2 bordered on the absurd, the story in Reach was leading to a conclusion any fan of Halo already knew. Even though it had to be a hard experience making a game where everyone knows that in the end, everyone dies, discovering how the end comes about was a moving experience for me. Not having been infested much into the Halo universe before, I found myself rooting for Noble Squad and hoping that it wouldn’t end up the way it did.

As in most first person shooters, the single player is a good place to get a gamer’s feet wet when it comes to the style of the game. Coming from the Modern Warfare series and being used to that style, Halo: Reach was difficult for me to adjust to. I had to remember that you don’t have to aim when you shoot even if I preferred using the scope on the DMR more than just using it in the normal viewpoint. I could definitely see Modern Warfare‘s influence when it came to that gun.

After getting used to the method of play in Halo: Reach, I have to say I prefer Modern Warfare 2‘s better. But I don’t know if that is because I’ve played more Modern Warfare than Halo and it’s what I’m used to, or if it’s because I’m just not that good at Halo. Getting killed over and over can be very frustrating for any gamer, but for myself it can bring me to the point of putting the game down forever. I tend to always finish the single player aspect of these games so the irritation does not lie there. The main cause of this is also the best part of any first person experience. 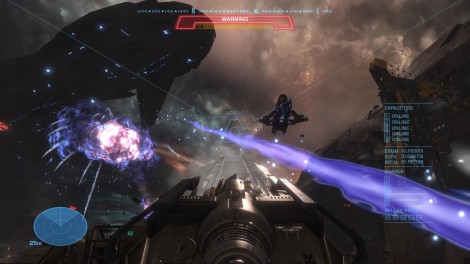 The Covenant is overwhelming.

But It’s all about the Multiplayer

What is it about these two games that make them popular? If I could make the easiest assumption in the world, it would have to be the multiplayer. Modern Warfare stands out as having reinvigorated the genre, bringing an almost RPG like level up progression to the forefront and adding a new goal to the game that used to only be about how many kills you and your team got. That type of progression has been copied by nearly every multiplayer game that has come out since then and Halo: Reach is no exception. Reach has taken it to the next level. Just like Modern Warfare 2 took what they created in Modern Warfare and made it that much better, Bungie iterated on it but took it in a different direction. While the Modern Warfare games were focused on perks your character had or specific type of weapon load-outs that you can customize, Halo: Reach is more focused on the aesthetic look of your character.

Use your credits to buy eye pleasing armor.

You earn credits after each round and can use those to customize the look of your character in a myriad of different ways.

The one thing that Halo: Reach has added that would do a game like Modern Warfare 2 good, is the daily and weekly challenges they’ve created. The challenges provide a player with an extra goal in both the single player and multiplayer experiences. Whether it be killing 50 Elites in the single player game without dying, or getting 50 assists in multiplayer, challenges make the game that much more fun. Any time a developer can create something to get players to keep coming back it extends the life of a title and I can see Reach becoming one of the most played games on Xbox Live for years to come.

These two systems provide that extra carrot on a stick we all look for in games. It keeps us coming back time and time again. It also provides that extra level of competition between friends. The leader boards on Modern Warfare 2 were ones I specifically paid attention to.

I wanted to be the at the top of all my friends in terms of ranking, number of kills and kill/death ratio. It made each round that much more important and made it more fun with that added challenge. Now I don’t expect to ever get all the achievements in Halo:Reach or even compete with her in terms of leveling up my character but Jadetiger_cg is the perfect example of that extra drive to succeed. I won’t put the time in that she has but I still strive to be as good as she is.

For me, multiplayer isn’t just about winning the round. It’s about all of the things that are beneath the surface that makes it so enjoyable. Both Modern Warfare 2 and Halo: Reach succeed in providing so much depth that it’s hard to stay away when you are trying to get to that next level.

You Need to Play ‘Em Both

No matter what your initial preference might be, you need to give both Modern Warfare 2 and Halo: Reach a shot. Both games offer an engrossing storyline in the single player campaign and a very extensive multiplayer. You have to get past some of the immature players out there shouting racial epithets and homosexual slurs, but if you find a group of friends to play with your experience will be that much better. The community surrounding the game is what I’ll dive into next week. Even though it’s the negative things that stand out the most, there are many things that need to be mentioned that some gamers might not even know exist.