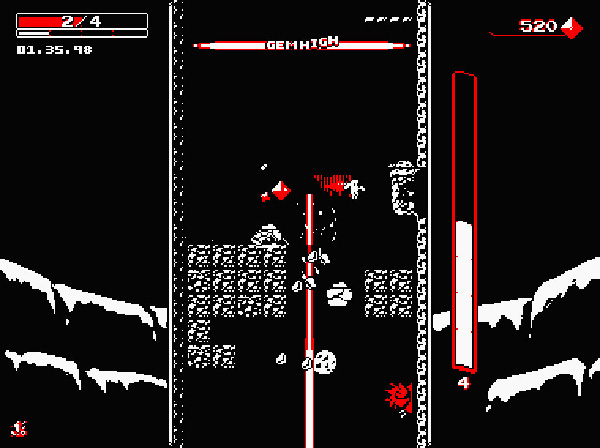 I should apologize to Downwell, as I had the most convoluted excuse for not playing it when it came out. Long story short, its core mechanic was similar to a game my friends and I had started working on right before it came out. The joke’s on me though, not only did I waste time not playing the game at first, but there’s no way we could have made something feel as great as Downwell. Ironically, I was floored.

Falling is exhilarating. Blowing things up in video games is also exhilarating. So guess what word I’d use to describe, Downwell? Fucking-fun-as-hell.

So yeah, the gameplay is badass, but what takes Downwell to the next level for me is the fact that it has levels. It’s a roguelike with structure. Tangible, complet-able stages…while falling. I just assumed it would have to be an infinite runner/faller with no real breaks in the action. It’s so easy to prejudge a mobile game and assume it only has a single trick in its design. Downwell is deceptively deep and I’m really trying to avoid all of these puns but I keep falling into them.

It’s not all about the guns either. Bouncing off of enemies and using the recoil to float around and line up your next move is essential to surviving and racking up a high score. You also have other decisions to make when it comes to which upgrades you select and which ones you buy. It turns out there’s a lot to do while falling through a giant pit. It’s not about hitting bottom, which is good because I’m terrible at it so thanks, Downwell, for reminding me I can’t even fall well.