To my knowledge, we’ve never publicly aired our conversations about pixel art. More specifically, I don’t think we’ve ever shared the fact that most of the time, I think pixel art/NES-era game design is played out, hard to see, and generally just not something I want to play.

For me to voluntarily pick up a game that employs pixelized graphics, there’s got to be something special about that game. Or, you know, really, really weird.

Pequod is that game.

Making no mean reference to Captain Ahab’s ship in Moby Dick, Nick Barr AKA Bearmancer’s Pequod puts you in the shoes fins of the great, white whale Mobias [sic] in your quest to destroy any manmade vessel in the ocean. Maybe you’re just trying to survive the onslaught of a humanity too callous to realize that they’re raping the planet of its limited resources to make piano keys. Maybe you’re a Jungian ur-whale, sprung from the collective conscious of cetaceans everywhere as a spirit of vengeance. Who knows?

It’s not a shark, but close enough.

It’s a roguelike, procedurally generated game with an open ocean map, plenty of enemies, stackable weapons/power ups and some strange game mechanics. Your control of the whale has a feeling of inertia which, when controlling WASD, is a little frustrating until you get the hang of it. I haven’t tried it out with a game pad yet.

Attacking the ships and submersibles (and, yes, dirigibles) is somewhat novel: you either breach the water and dive down on the ships or use your power ups, which are triggered on a timer rather than employing button pushes. Power-ups like a laser beam that shoots out of your whale face or gigantic saw blades the size of the whaling ships that bounce around the screen like the Arkanoid ball.

Then there’s this guy: 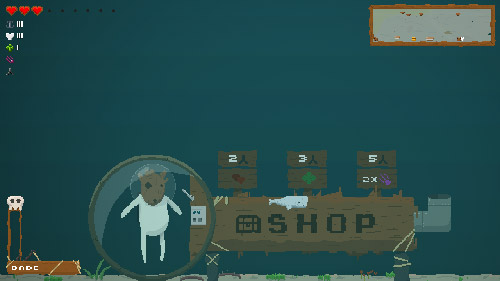 Not even the deeps can keep the Bearmancer away.

I told you it was a weird game, guys.

As you destroy ships, your ‘worship’ meter rises – I don’t know if other whales worship you or it’s Captain Ahab’s worship of revenge that’s being referenced in some convoluted way, but once it’s full, look out: the random boss ships show up and you’ve got to take them out.

With a fairly soothing, but slightly haunting soundtrack, the never-the-same gameplay and the price of “Free or pay for it what it’s worth,” Pequod is definitely worth a look (and I’m happy with the $10 I gave to its creator for providing me with such a bizarre distraction.)

Pequod is available now on Windows and Mac on Itch.