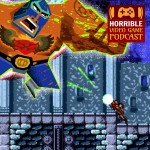 Cole is coming down after some serious gaming highs. Axiom Verge brought him back home after he had to say goodbye to the Inquisition. Justin recommends some Guacamelee and Ziggurat to fill Cole’s time before The Witcher 3. Plus Konami sucks and more.

Horrible Video Game Podcast – Justin wants to know what his guest has been playing and has some suggestions. Plus gaming topics worth talking about.

Thanks to Rhinoceros Beetle for allowing the use of  “Witchhh (Soundtrack)” from the album Horse Pact EP as the HVGP theme song.