Mortal Kombat was released in arcades in 1992 before coming to consoles the following year. It’s impact at the time is probably just as large as its legacy that continues on into 2015 with the release of Mortal Kombat X.

Cole – I remember my friend had a Prodigy account and he printed out all of the finishing moves that we then took to the arcade. We still got destroyed by the older kids and never got to use them. Until the home version came out.

Justin G – My brother typically used Kitana and dominated the crap out of me using that suspension wave/fan throw/flying jump-kick combo, but it was fun to watch him figure out fatalities. Although I played it in the arcade, I think it was two tokens instead of one and I was always more interested into plugging my paper-boy money into Cyber Sled.

… I can’t forget that unlocking Reptile on the Genesis remains one of my favorite gaming achievements. 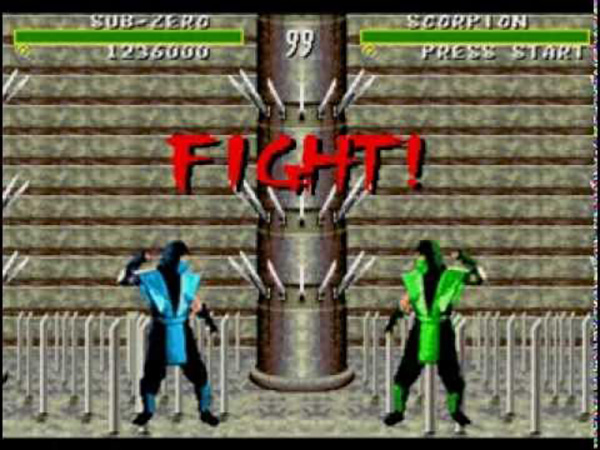 Justin L – There was a moment where learning the special moves in MK was more important to me than learning the ones in Street Fighter, and that’s when I became an MK fan. Mainly because spamming those moves or pulling one off to win a match was always satisfying and annoyed the hell out of whoever I was playing against. I’m so much fun when I play competitive games.

This is why we have ratings, kids

Justin L – Playing it in the arcade was always a rush as I knew I was too young to play it, but man those high schoolers didn’t have to be so mean about destroying me. I couldn’t believe it when it was coming to consoles because I knew my parents would have no idea what we were actually playing. It turns out I didn’t care so much about the fatalities (because I couldn’t pull them off) and gore, but Testing My Might against my friends was the real challenge. Build up those calluses or suffer the consequences.

Kenny – I was pretty young when Mortal Kombat first came out – like elementary-school age – and since my parents were pretty responsible, they didn’t let me play it.

That didn’t stop all of my friends from talking about it, though, and mimicking the moves on the playground. I pretty much knew all of the character’s signatures moves from recess alone.

Justin G – You know, for as restrictive as my parents were about how much gaming we got to do, they were fairly lax in terms of what we played (which, incidentally, appears to be the important factor in whether there are negative effects to kids’ gaming). That said…my kid’s not playing something like the Witcher until he’s at least nearing junior high age, I think. I’ll burn that bridge when I come to it. 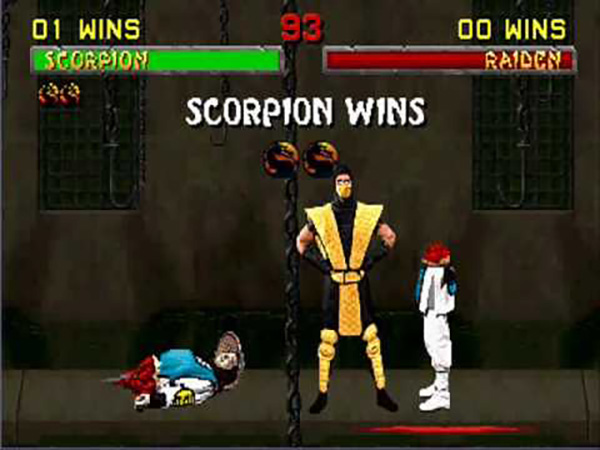 That had to be hard to motion capture.

Kenny – My parents were pretty lax in most respects, too; I played Wolfenstein/Doom on my Dad’s computer and that had some pretty objectionable stuff in it. But there was something about Mortal Kombat that made them put their foot down. This made me want to play it more, of course, but I never really had the chance until I was much older.

Justin G – Yeah, I dunno why there wasn’t any objection to it at my house – we sure weren’t allowed to watch R-rated movies unless it was with them/with pre-approval. I expect if my mom noticed the female-form-objectification in MK, she probably would have changed her tune.

Jordan – My brothers and I only played Street Fighter 2. I thought Mortal Kombat looked terrible compared to it and never gave it much thought. That and I wasn’t harboring any deep seeded resentment against my parents or a strange blood lust that caused me mutilate small animals or whatever other reason kids were drawn to a game like that. I did have a friend in junior high school that got real into the game and would explain every detail about it to me in the morning before classes. The characters backstories, their different moves, the hidden secrets. It was pretty interesting to hear about, but never enough to actually make me what to play the game.

Justin L – Haha, I remember thinking Mortal Kombat looked terrible, too. I didn’t get it. But the blood splatter sure was cool. MK II though, that got my attention. The story never mattered to me until the movie made me pay attention.

Justin G – MK II was far superior to the first one. Also, Goro was a sonofabitch.

Secrets of the Arcade Boards

Jordan – Maybe when I say story I’m referring to some meta story surrounding the development of the game and how someone had died during development and their spirit was trapped in the game. Something stupid that some kid’s older brother made up to screw with him and he didn’t know any better and spread the story far and wide. I just remember listening to him go on about the game and flipping through his three ring binder of moves. I don’t actually remember anything specific.

Justin L – I’d be curious to see how close the games stuck to the original plan for the story. Especially with the ninja origins and that kind of thing. I just had a feeling they slapped it together for 1 and improvised/ret-conned by MK 3.

Jordan – Rolling in characters into the game that fans argued and theorized about in early internet forums. I have heard some stories recently about Ed Boon being a pretty funny guy when it comes to internet forum chatter that like

Jordan – I do remember in one Mortal Kombat a face would pop up randomly and say something weird. I’m sure that spawned some “What the hell was that!!!!” moments for some younger guys.

Justin G – I remember that, there was some finishing move or combination of things to get that to happen and some doofy dude would pop up and say…something

Jordan – This was the kinda stuff my friend was talking about. Street Fighter never had that :disappointed: Blanka may have been Guile’s long lost friend…. that was about it. 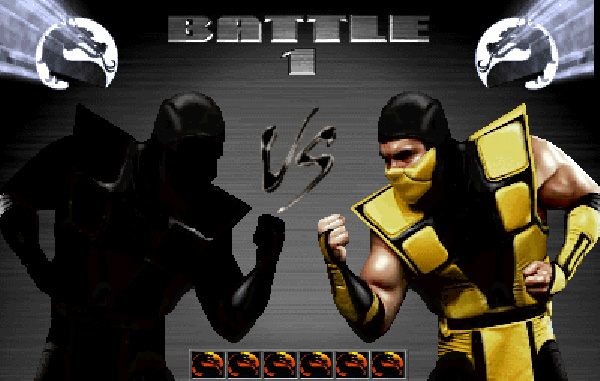 Also not pictured, Blanka, because this is an MK articles, guys. Guys?

Justin G – The fuck was Blanka?

Jordan – The green guy with the electric attack

Justin G – Yeah, but why was he a green gorilla alligator hybrid?

Justin G – I assumed “Because: Japan”

Jordan – He got bit by a radioactive gorilla while wrestlin an alligator in the toxic run off of some chemical plant. And because japan, yes.

Jordan – It’s starting to all tie together! why didn’t my brothers and I see it sooner! I’ve got to find my three ring binder of Street Fighter moves. To my mother’s house!

Jordan – Go check the garage for some old boxes of mine. If you get a minute, I know she’s a beast.

Justin G – Let me put my pants on

Justin L – I’ve wanted to correct you two every step of the way, but I like how this turned out.

Justin G – There are few things in life better than a properly executed “Your mom” joke. 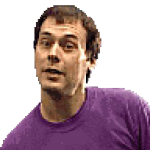