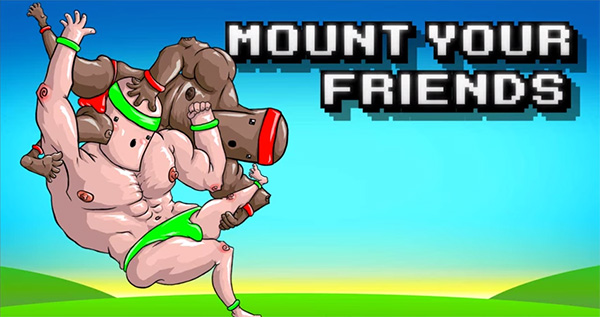 Before I start, I just noticed that there’s an age gate to buy Mount Your Friends and while it’s justified, it’s also kind of hilarious.

I remember watching a trailer for Mount Your Friends when Ethan wrote about it’s launch on the Xbox Live Indie Games store. It was ridiculous in amazing ways, but as with any Xbox Live Indie Games release, it was also easy to completely dismiss. I was happy it existed and I thought I got the joke. Haha physics. Haha penis physics. I was a fool. A fool who never thought to play Mount Your Friends with, you know, friends.

Hold onto my butts

After a full week of competitive mounting of my friends and colleagues, I’m here to report that Mount Your Friends needs to be taken seriously and placed in your growing rotation of your games for your local multiplayer game nights.

As an entertaining game for people to watch, its strengths are obvious. Wonky physics and twirling penises as exaggerated as they are hypnotic are sure to find an audience. Originally I thought Mount Your Friends would be more fun to watch than to play. The core mechanics of trying to flip your character up the tower of dudes is enjoyable, but the underlying skill and the drama that it can lead to make everyone who plays it move beyond its silly presentation. When a good round of Mount Your Friends comes to a close, its as exciting as any of the other great local multiplayer games that have come out recently. I’m shocked that I’m as excited for my next match of those games as I am for my next match of Mount Your Friends.

On top of that, we just started playing around with the custom artwork that you can import into your game and things are about to get really silly and really dirty. There are also plenty of ridiculous game modes beyond our intense one one rounds of mounting.

Mount Your Friends never stops waving its sense of humor in your face and that’s reason enough to play it. Stick with it long enough and you’ll find there’s a lot more to this game than what meets your eye.

Mount Your Friends is available now on PC and Xbox 360.