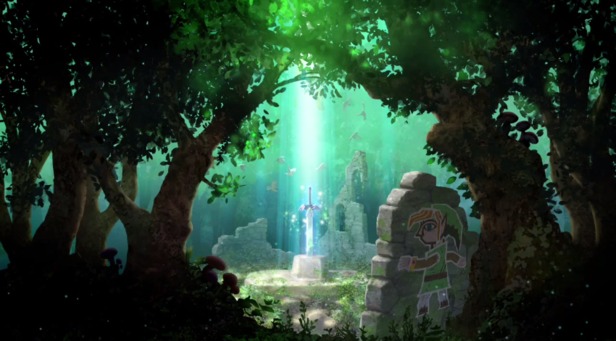 The saying “familiarity breeds contempt” often holds true when sequels don’t expand much on the predecessor, but that couldn’t be further from the truth with The Legend of Zelda: A Link Between Worlds. After enough time, familiarity can turns into nostalgia and little callbacks to the original game lead to knowing smiles. A Link Between Worlds nails this time and time again. The world is familiar to those of us who played A Link to the Past – we generally know where things are, but enough is different that it doesn’t feel tired and a retread of the same thing.

If you listen to the podcast you will know that I didn’t finish the game. Not because I don’t love it, but because I got distracted by other things (hello, Xbox One). Updating the graphics and gameplay tropes of my favorite Zelda game of all time (A Link to the Past) proved to be exactly what I wanted out of a handheld game. A Link Between Worlds is perfect on the 3DS and once again Nintendo has shown that it’s really the only developer that can make great games in 3D on their system. While much of my time was spent with the 3D turned off, the instances I did play with it on I was blown away by how much depth was created throughout Hyrule and Lorule with the little slider.

I would be remiss to end this little write up without mentioning the music in the game. The full orchestral remixes of the overworld themes from A Link to the Past are fantastic in A Link Between Worlds. If you don’t get a tingle down your spine the first time you hear this awesome remix you aren’t alive. If you haven’t played this game yet, go play it. Now!