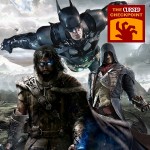 During the week of new Assassin’s Creed releases, Justin and Aaron just finished Shadow of Mordor as Jordan started flying around Arkham City. What can these franchises learn from each other? Is the answer nemeses or super villains?

The Open-world stealth action murder simulator with collectibles genre has evolved over the last generation of video games to become one of our favorites. Shadow of Mordor got us even more excited, but we’re still going back to play the previous games, too. What is it that is working about this genre? What needs to change? Can next year’s games change in time or has the genre peaked. Aaron, Justin, and Jordan are in the thick of a few of these games right now and have some ideas but don’t agree where this should all end.