Fear is a funny thing. Some people stay away from horror games entirely others aren’t scared of them at all. That doesn’t mean fear won’t find you though.

What are some of the most unintentionally scary things you’ve come across in games?

Aaron – Anyone who knows me well is aware of my fear of large deep bodies of water. This thalassophobia, if you will, gives me some great anxiety when playing modern 3D games where the world is an island or there are underwater missions. Assassin’s Creed IV: Black Flag is a game I finished and not without getting some sweat on my palms. Grand Theft Auto 5 has an achievement where you get killed by a shark. I did that as some sort of torture to myself just to prove to no one in particular that I could handle it.

Even going back to my childhood, Ecco the Dolphin is a terrible nightmare of horrors! Horrors, I say! One of my favorite horror games to date is Dead Space and not even that makes me squirm as much as the idea of taking the plunge. I suppose it’s open to debate whether or not the deep blue sea is unintentionally scary or inherently frightening. 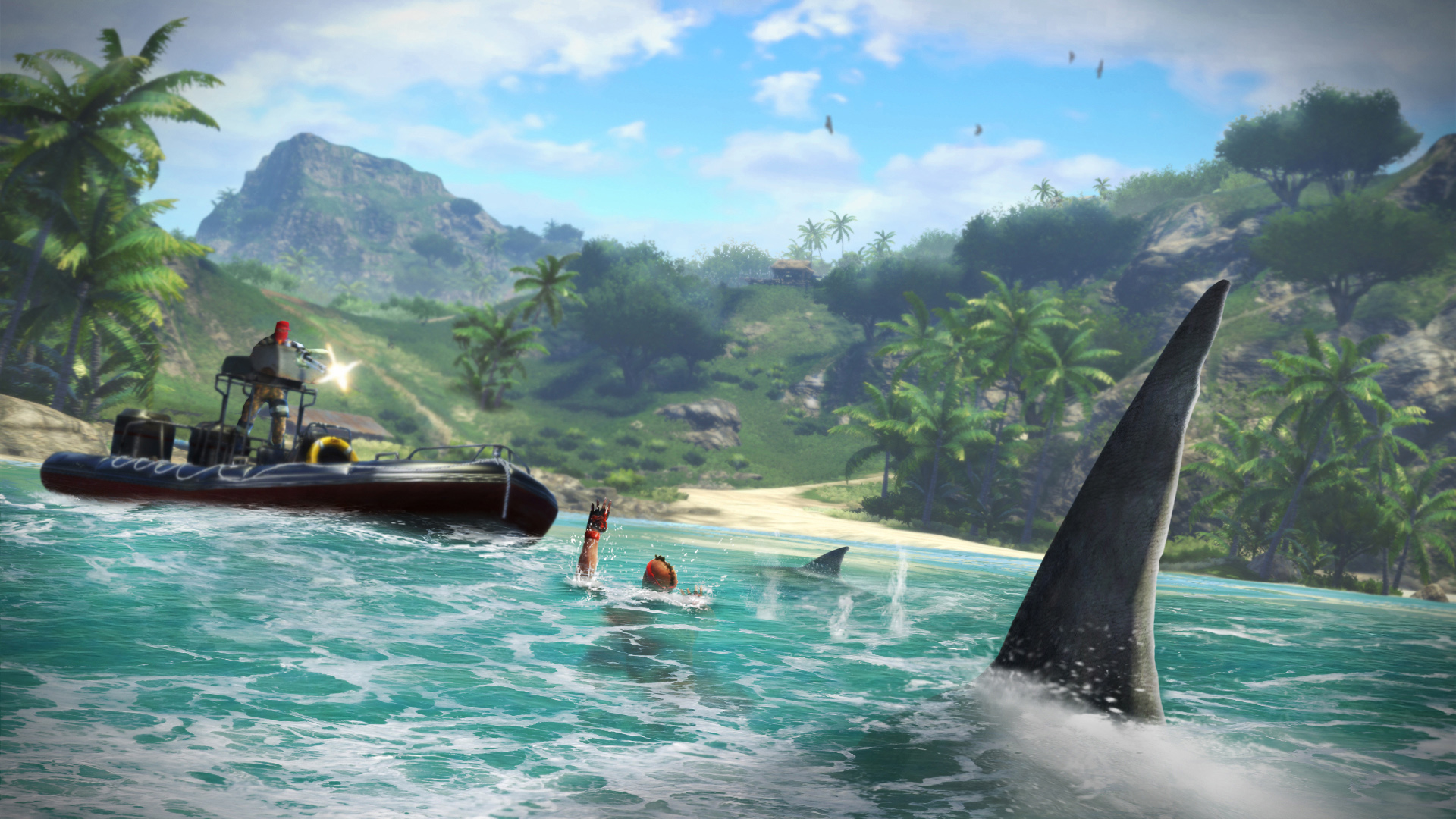 You are screwed, dude.

Justin L – How’d you do with Far Cry 3 and shark hunting? I have the same phobia but it was hit the hardest with that game. I wasted so many bullets trying to mortally wound it’s fin so I didn’t have to jump in the water with it. It didn’t matter if the map told me there were no sharks in the area. I had to psyche myself up for every single dive. Even the turtles scared me after a while. I’m also probably never getting on a jetski ever again. Even on fresh water.

Aaron – I totally meant to mention Far Cry 3. Just the memory of FPS shark fighting gets my heart pumping. I had the unfortunate mishap of dying during a particular mission on a boat, then having the game’s checkpoint smack me into the open waters a distance away from the boat. I paused and had to psych myself up to actually swim the distance, knowing the faster I got through it, the sooner I would be back to fun and violent adventures on land.

Jordan – Yes, open water is terrifying. I remember the large open parts of Ecco the Dolphin making me rather uncomfortable. I can recall having nightmares of being stuck in those open spaces but as a slow swimming man instead of a fast moving dolphin.

Justin L – Thanks for ruining Ecco the Dolphin for me. That was Lilly’s favorite game and we can never play it again because Justin is scared.

Cole – You guys are a bunch of wimps but at least you play games that could frighten you. I refuse to play games that could scare me. I braved my way through Last of Us because of Naughty Dog. Every single time I heard a Clicker through my headphones a swift chill ran down my spine and my heart increased its rate. There were moments in that game when it became almost unbearable. While your stuff might have the actual chance of happening in real life, strange sounds coming from mythical beings is way scarier.

Justin L – I love that The Last of Us made non-horror game fans playthrough horror sequences. I’m still surprised by how uncomfortable that game made me because it definitely isn’t the first thing you notice about the game.

I wish I could remember the game, but the first game I was ever scared of was on my friend’s Commodore 64. It was nuclear war related but that didn’t matter. What was scary was that I was about 5 or 6 years-old and when the game was over it presented you with a countdown screen. I had never seen one before and this older kid in the house told me that if I let the countdown reach zero, the computer would explode. Long story short I died in the game and couldn’t figure out how to turn it off so I frantically tried to unplug it and almost knocked the monitor off the table. Then I saw the giant 0 on the screen and held my breath. Nothing happened. Assholes.

Jordan – I never played The Last of Us but have heard of people avoiding it because they thought it seemed a little to scary.

I’ve never been a fan of horror so I’ve never played anything that would have been classified as being scaring. But, the moments that stand out in my mind are watching my cousin play the first Resident Evil and both of us squealing when those dogs jump through the window in the first hallway. I stopped going over to his house until he finished that game. Another is when I got to the Psycho Mantis part of the first Metal Gear Solid, and he started talking to me… not to Solid Snake, me, the sixteen year-old sitting alone in an empty basement about 2 o’clock in the morning… kinda freaked me the hell out. I think I may have actually stopped playing it and went online to find out what the heck was happening.

I’ve watched my 10 year=old nephew get really freaked out talking about Herobrine being in Minecraft. I had to explain how the internet works and that everyone on it is a liar. He showed me a grainy (and kinda steady-cammed) YouTube video of someone being attacked in the game by Herobrine… then I had to explain about video editing software. So, it’s nice to see that kids these days are still being tricked into scaring themselves.

Coop – I’m jumping into the conversation a little late, but I have to get on the bandwagon of open water. It terrifies me. The ocean is pretty damn creepy and in real life I find myself making sure that someone is out further than me if I’m swimming. It’s mental comfort thinking some freaky deep sea creature will get them first, giving me enough warning to get the hell out of there. Far Cry 3 made me jump more than Dead Space. Like Justin, I’m a pro shark fin hunter. But I even lost a few hides because they sank too deep and I just couldn’t jump in looking for them. What ruined the game later was my over confidence in running through short streams. I didn’t know there were crocodiles in the game. Someone should’ve warned me about the crocodiles.

Justin G – First off, as the resident former NCAA swimmer, you all are a bunch of fucking pansies.

And MetalArms is terrifying. If you don’t equip all robots with Asimov’s three laws, you’ve just invented a more evolved being. Robopacalypse. It ends badly for humanity. 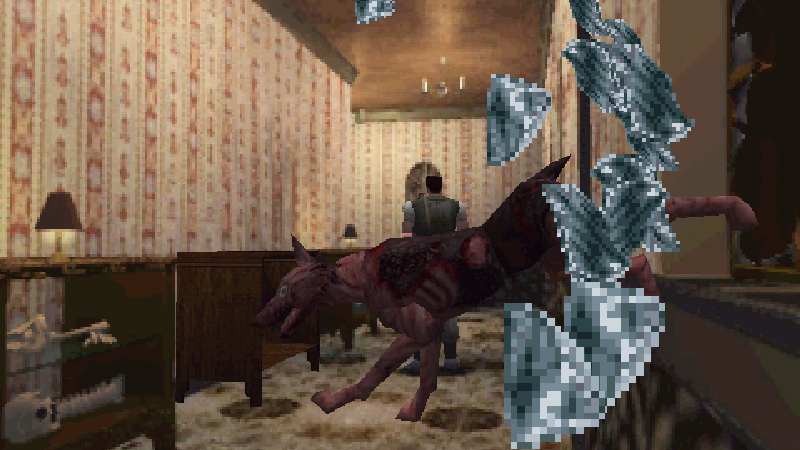 Also, despite the fact that Resident Evil IS a horror game, the zombie dogs were terrifying. Dogs are already predators. Smart ones, enough so that they’re preserved in myth as the Big Bad Wolf. Also, they’re traditionally protected from zombies or zombification. The zombie dobies were shocking.

Kenny – Those goddamn dogs made me a cat person for a good number of years.

I may have watched War Games too much as a kid, but I’ve always found DEFCON to be frightening. Catastrophic destruction in most video games usually involves explosions, toppling buildings, and a heavy layer of melodrama; DEFCON does it with a blip on the screen and little to no acknowledgement of the actual repercussions. That inevitable moment when you go, “Oops, I guess 10 million people just died,” is pretty unsettling.

Justin L – Yeah, I don’t think I could do DEFCON. Not something I want to “get good at.” I’m also not really interested in playing Democracy 3 for similar reasons. I find it to be one of the more unsettling sims out there.

Those got me thinking about other games that require a bit more imagination on top of the gameplay in order for fear to creep in. I will admit I was scared multiple times by Haunted House on my Atari as a kid. Especially when I got really far and things got tense. But the one non-horror Atari game that I still won’t play is Centipede. Not because it was necessarily scary but there was something about the music/sound that would speed up as you got further and looking back I think it gave me an anxiety attack. I just remember putting the game down and I couldn’t get things to slow down around me. My mind was racing and I’m pretty sure I was terrified that that mean the spider was going to come after me.

Justin G – I will give you 100% vouchsafe that Centipede was creepy. So was Defender when all of the colonists died. 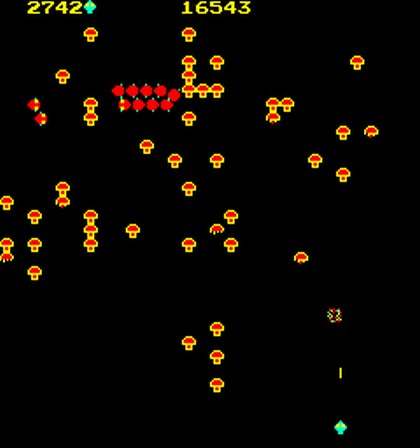 The stuff of nightmares.

Gifford was onto something we are all wusses. Seriously, open water and Atari bugs…. makes you think that maybe the Alien: Isolation developers may have tried too hard.