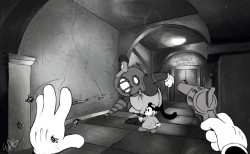 I’m sorry, we weren’t done with you, yet.

Something definitely seemed a bit off at Irrational Games towards the end of BioShock Infinite’s development. I’m guessing it wore Ken Levine down creatively and he has joined the ranks of other faces of the industry in taking a step back to more of an indie approach to his next project. It sucks that it will effect so many jobs at the company, but hopefully those talented people land on their feet soon. I honestly thought that Irrational Games would turn out to be the next Double Fine. Functioning on as a large independent company that literally continues to exist directly from the support of its fans. Things at Double Fine aren’t always smooth though, but it looks like Broken Age has at least secured a happy ending. I’m still holding out to play it until Act II is out, but have heard nothing but glowing intrigue when it comes to reviews of the first half. I’m also watching Twitch Plays Pokemon from a distance, but cannot help but be intrigued. I hope that game continues to break and they come up with new ways to make the streams interactive. The chaos is beautiful.

The last week in headlines