Currently, I’m juggling 3 playthroughs that I have full intentions of finishing. That makes it easy to feel like I’m wasting my time with one game when things aren’t going so well and I could be playing one of the other two. There seems to be something special about my current threesome of Earthbound, Skyrim, and Saints Row IV. Earthbound is a pretty known quantity to me and charms me purely based on its wit and that it happens to be one of my favorite games of all time. The other two games always seem to run the risk of being one bad session away from losing my attention, yet I’m actually more excited about them today than I was when I first started playing them.

Skyrim is well documented as a time sink as it is incredibly easy to get lost exploring and getting distracted by shiny landmarks. I’ve fallen into its wonderful trap before. Recently though, my main source of entertainment has changed from pure exploration into finding more scripted sequences and seeing how they play out with my particular character and his crew. In most RPG’s my personal preference is to define my character as purely good or purely evil, and make decisions accordingly. This results in a sense of authorship of my character’s experience, and I tend to restart the game or sequence if things end up not aligning with my desired person storyline. To a fault. 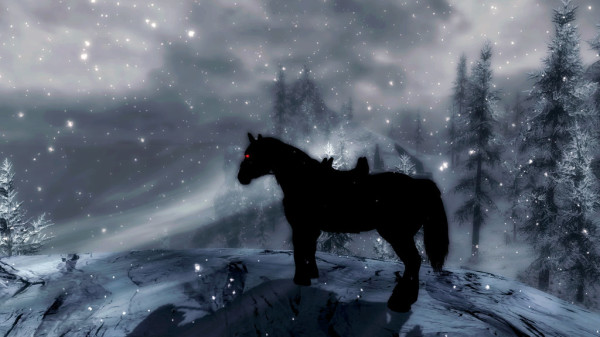 Ever since I made the fateful choice to kill a single chicken (that resulted in me slaughtering its owners in self defense) at the infancy of this playthrough, I’ve approached Skyrim with a much more nonchalant attitude. However, it wasn’t until I was neck deep in Dark Brotherhood quests that I became comfortable with accepting any and all of the repercussions that come with my more questionable decisions. This couldn’t have come at a better time as I was finally deep enough in the world of Skyrim to see its limits, so naturally the next step is to get as dirty in the details as the world allows and see how things shake out. Which, let’s face it, in Skyrim there are hundreds of ways to accomplish even the most innocuous of objectives, and I couldn’t be happier when things go sideways like when my horse becomes a better assassin than me. Previously, that horse would have been stabled so there was no chance that it could interfere with my perfect plan. A lot of time’s that perfect plan is boring, and Skyrim is much more entertaining when you actually live in the world rather than trying to control it.

Thankfully my RPG OCD has never carried over to games like Saints Row as it would have a tough time coexisting with the ludicrous chaos that Saints Row IV encourages. I’d be lying, though, if I didn’t tell you that I was a bit apprehensive about the promise of super powers in the game and the thought of a co-op experience with those powers. I honestly thought that Saints Row IV could be a huge step back or feel like a boring side mission for the series. I played through the entire storyline of Saints Row: The Third by myself and I thought the primary reasons I love to waste time in a Saints Row game would be broken by the potential power of two superheroes. It turns out I had absolutely nothing to be worried about. The super powers are fun to use and make for a great alternative way to traverse the familiar city of Steelport. I even found myself missing a co-op partner after the first time I jumped back into the world solo. When given the choice not even a superhero would want to fight off aliens by himself.

How do you handle your open world experiences? Before you answer I recommend taking a relaxing drive to clear your head: