Hi. I’m GiffTor. I’m from Indiana, where, much like many other parts of the Great Lakes states, our strongest form of public criticism tends to be mild sarcasm. At least until the internet, anyway. I know that out there, despite what the common imagery may be, most of you aren’t evil, racist, homophobic misogynists who have spent hours on your player emblems to make them into pornography. Most of you are out to have a good time, playing online, blowing off some steam, and if you’re like one of my coworkers, cursing in both English and Russian when she’s losing. 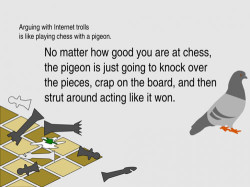 Don’t argue with the trolls, but DO say “not cool, man.”

Yeah, no. See, you’re the Not Evil Gaming Public. You don’t get off that easily. See, you love gaming, you spineless pricks. It might be your refuge or maybe it’s your passion or if you’re really lucky, you get paid to do something related to gaming. You don’t get to shrug aside the responsibility, individual and collective, of keeping (or making, depending on my cynicism level) the the multiplayer gaming world civilized. You need to get your shit together and speak up. Or file a complaint. Or lots of complaints. Over and over until the bad apples get the idea.

I think it’s become fairly clear from my writing here at the site and participation in podcasts that whatever the opposite of hypersensitive is, that’s me, so someone using ‘coarse’ language isn’t going to upset me and it’s not going to result in me pulling the complaint trigger too quickly; you can pretty much shit-talk me all day and I’m not going to be bothered (partly because I don’t consider being called a ‘fag’ an insult). But when you start heading into harassment territory, I’m not waiting around to find out the backstory. That’s what the enforcement teams are for – to investigate the complaint. 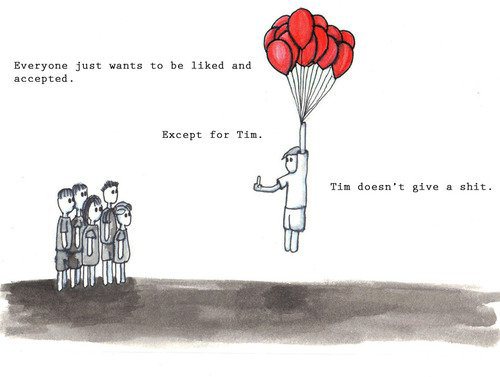 Substitute “GiffTor” for “Tim” and Bob’s your uncle.

Yeah, I said it

I’m not a terribly big fan of the term “complaint,” because it sounds whiny. It doesn’t sound like you’re calling attention to the mods that some guy was running right behind a female gamer, calling her a dirty cunt and telling her he’s going to rape her in the game and then in real life and you and everyone else heard it and decided that shit shouldn’t fly and let Microsoft or Sony or Treyarch know about it. Oh, did that offend your sensibilities? Was that a horrible little scenario I just crafted? Feel free to go back up and click on that Fat, Ugly or Slutty link I posted and tell me how I made it up.

Multiplayer gaming and the Online Disinhibition Effect (aka: John Gabriel’s Greater Internet Fuckwad Theory) are relatively new. Actually, in the whole of human history, these are totally brand spanking new and we have no idea how to deal with them. Think about it. We literally don’t have the social, emotional and intellectual cues and guidance to figure out how to respond. Have you ever been playing a pick up game of soccer or frisbee or True American and one guy starts chasing after another one, threatening to kill him or standing over the top of him when he’s tripped and crouching over his face repeatedly? No. Of course not. At the very least, you and every else involved in the game would stop, stare in horrified shock, and then tell the abusive guy to knock it off and get the heck out of your game. If he didn’t, freedom of speech at your public park be damned, the cops would probably get called and that guy might be run in for assault or disturbing the peace. And you’d feel fine with your decision to say something.

So what’s the deal with not doing anything online, huh? What are you afraid of? Call of Duty: Black Ops 2 probably has one of the worst reputations in terms of a bunch of really horrible people playing online (which, having played a lot of it, I’d say is undeserved – it’s no worse or better than any other multiplayer experience), yet they have an extremely clear Security and Enforcement Policy. I went ahead and called up Activision Blizzard: the security team breaks infractions into minor and extreme via identifying quantifiable harm. While most of the list of violations were cheating-related, they were careful to point out that some of the review process (and related punishment, including perma-ban) included the player’s history. (For the record, I tried getting in contact with Trion, but got nothing.)

That’s right – it turns out that Martin Luther King, Jr. was right when he spoke about video games – In order for evil to triumph, all that is required is for the Good Gaming Public to do nothing. If you’re not filing complaints about serious harassment of you or someone else, you are part of the problem. And you’re evil. If there’s not a separate, in-game option for filing a complaint, you can always rely on your chosen platform’s own enforcement. Microsoft’s was the source of some hilarity in the form of now-defunct whywasibanned.com, although since the departure of Stephen Toulouse, they haven’t had a public face of enforcement because they didn’t know how to deal with the equally ugly side of people who don’t know how to take punishment. (Toulouse got ‘SWAT-ted and people threatened to kill him. No, seriously. Over video games.)

White Knight? Or, “Not an Assbag”

The flipside is that you’re afraid that someone’s going to call you out and get all furious for White Knighting. First off – who cares? Regardless of the reaction from others, if someone’s harassing another player, whether they can ‘take it’ or not isn’t the issue. The issue is the next person, who might be hurt or frightened. 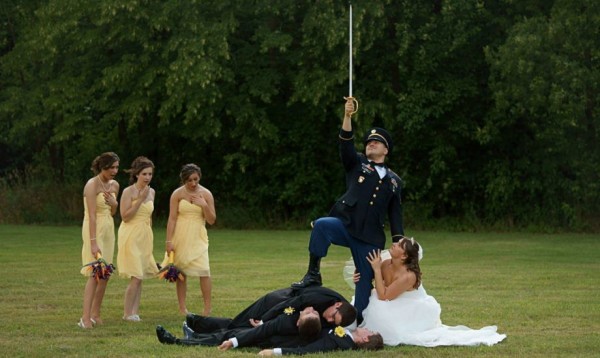 With all due respect to the US Army. This picture just pulled the concept together. (And apologies to the USMC for misidentifying the uniform. The sword distracted me.)

Secondly, probably because there’s some weird gatekeeper effect that I haven’t figured out, the term White Knighting has been expanded from its original, patriarchal definition where the man ‘saves’ the woman and, as a result, is deserving of a ‘reward’ to include any time a dude stands up for a lady online. This is your classic example of stupid. John Scalzi expounds upon it here, but I’ll just put it simply, so in the event any cavemen figure out how to read, they can get it:

If you love games, you want them to have a good reputation (as a whole). You don’t want them censored or sold wrapped in plain brown paper. You want them celebrated and protected. In the U.S., women make up 50.9% of the population. IF YOU ALIENATE WOMEN FROM GAMING, YOU WILL LOSE THE PUBLIC DEBATE.

I considered adding more statistics, like control over purchasing decisions and boobs, but I decided against it; the raw population number should be simple enough. Now, Anita Sarkeesian is doing some great work aimed at examining the creator-side of the equation, but Feminist Frequency, and Fat, Ugly or Slutty and Pure Geekery can’t carry all of the load. The “file complaint” option is there for a reason: gaming is supposed to be open to everyone. And if you’re not helping to make it that way, by creating a social structure that includes consequences for actions (difficult in Reddit, simple when there’s a Code of Conduct), you’re part of the problem. And girl gamers? This isn’t just a diatribe about how gamer dudes suck in the way that they interact with women. While I get that you may not want to speak up and ‘out’ yourself as a girl in a game where some people are harassing a third party, your “File Complaint” button works just as well, not only for sexism, but for racism and homophobia (which is a dumb term – you’re not afraid of the GLBT crowd, you’re just an asshole).

I’m done belaboring the point. If you’re not helping the online gaming community police itself, you’re enabling the horrible behavior that shows up on network news channels and gives people like the esteemed Senator Rockefeller soundbites for the Senate Floor. Saddle up.

P.S.: Figuring out if you are harassing someone or just talking shit is easy: If you’d say that kind of thing to your gay, black, female friend to their face, you’re probably fine.

P.P.S.: Thanks to Nicole at Pure Geekery for being a sounding board.

2 Comments → Mail This: Part of the Precipitate