I don’t remember exactly when I purchased Gunpoint but for one reason or another it sat uninstalled in my Steam queue for at least a month. After growing tired of my recent Fallout: New Vegas and Skyrim runs, I needed something different and by happenstance, stumbled across the game sitting there like a neglected child. After completing the game in short order, Gunpoint has come to be one of the most entertaining gaming experiences I’ve had in the last year.

A Delightful Tale of Espionage

In Gunpoint, you play the part of private spy named Richard Conway. Richard finds himself embroiled in a corporate conspiracy and is eventually framed for murder. Being that spies aren’t as useful behind bars, he goes about proving his innocence with the help of a cast of characters that may or may not have ulterior motives. It’s very important to actually pay attention to the story (as told through pre-mission text-based dialogue and items hidden in levels) as it’s a pretty good story with all manner of twists and turns. It’s also pretty humorous as Richard himself is almost cartoon-esque in his approach to spying. 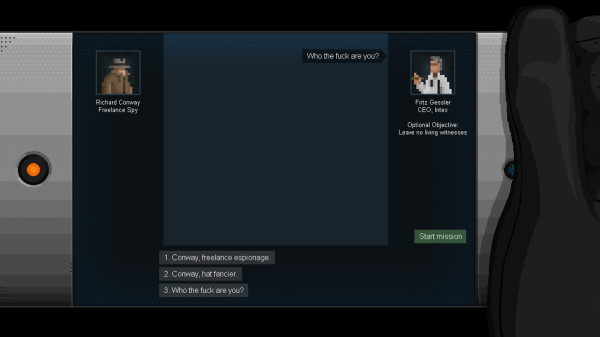 You’re given conversation options, but I’m not exactly sure how they play into the story (I’m not a scientist).

The game itself is presented in a near-future setting with a touch of classic noir, though Conway, himself, feels like a bit of a fish out of water. The jazzy soundtrack is never abrasive or annoying and at one particular moment, almost lulled me into a zen-like state that I was only able to break once the oven timer signaled the beginning of yet another taco themed dinner in my house. The visuals are solid and there’s quite a bit attention to detail given to the levels and the characters that inhabit them.

I’m a gonna jump right into that there building.

This wouldn’t seem all that exciting or interesting except  for the fact that Mr. Conway has access to the most fabulous pants in the world. These pants allow him to jump long distances and completely negate fall damage, which are two very useful attributes when attempting to infiltrate secure facilities. Outside of scaling large buildings and making quick escapes, you can also launch Conway at the unsuspecting guards of these facilities, pouncing on them and then pummeling away not unlike a kitten pummels a captured mouse. It’s quite satisfying to say the least. (On a side note, I’d suggest punching the guards for an inappropriate amount of time as the results are pretty hilarious.)

Merely jumping and punching your way through objectives, however, would be counterproductive to usually inconspicuous nature of spying, so Conway also has access to a large assortment of other gadgets as well. The most important tool of the game (sorry super pants) is the Crosslink, an item that allows you to hack into electronic devices and rewire them. This means that you can rewire a light switch to open a locked door or modify a security camera so that it turns out a light as opposed to signaling the alarm. There’s a lot of fun to be had with this device and it’s complimentary toolset (you’ll eventually be able to hack secure lines and the weapons of the security guards). 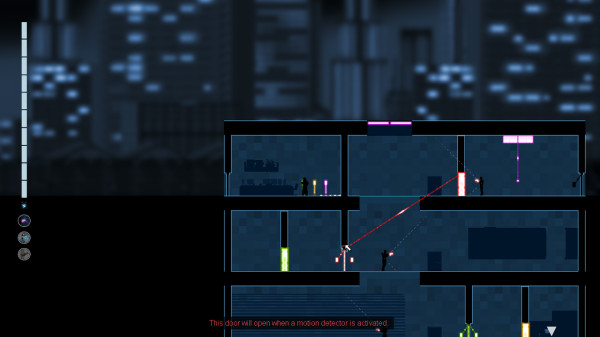 My dad tried to teach me to be an electrician, but Gunpoint made me a pro.

Levels are designed in a way that there are multiple approaches to meeting your objectives. You can slip through undetected or take out every guard you see, fueled by pent up teenage angst and indigestion from a taco experiment gone bad (sorry, got a bit personal there). Each mission is a bit of a puzzle though, so quick thinking and even quicker reflexes are absolutely important. That being said, unless you’re really stupid, the game is very approachable and I never had to refer to a walk-through throughout my time with it (I am of a moderate intelligence level).

My biggest gripe with the game is that it ended too soon (it took me just about 3 hours to complete it). I was having a ton of fun playing and while there is a level editor, the story itself enhanced the gameplay quite a bit. I miss Richard Conway already and want to know what he’ll be doing during subsequent espionage sessions. This in and of itself is a problem with any game that introduces an attractive plot and interesting protagonist, so I can’t rail on it too much. Besides, it’s probably better to want more of something than to be sick of it, right? (That’s directed at you, tacos.)

I really enjoyed my time with Gunpoint and wish I’d have played it sooner. Regardless, it’s a very entertaining game and worth your time, though afterwards you’ll attempt crosslinking your own appliances, which can be super dangerous.

Gunpoint is available now for PC on Steam.