Nothing says, “You’re doing it wrong” quite like a laser. Stealth Bastard Deluxe charms and fries Justin’s pants more than a few times while its mechanics and style manage to stand out just enough in this crowded genre of retro 2d platformers.

In retrospect it was the subtle word in Stealth Bastard Deluxe’s title that prevented me from trying it sooner. Around its release last year, I had fallen hard for another 2D stealth platformer. In the interest of preserving a balanced game diet, I had had my fill of stealthing for a while and passed on the game. That proved to be a mistake because once I played SBD it shot right up there with my favorite bastards of all time. 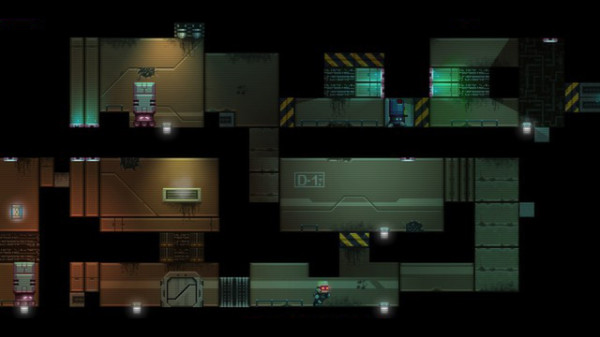 They will find you.

As I was getting setup to play Stealth Bastard Deluxe, I was immediately impacted by the soundtrack by Ricky Honmong. These chiptunes have some serious hip-hop inspired beats and put me in a bouncy mood as I made my way through the menus. The bonus of starting a game with pleased earholes cannot be understated (not to mention that the music stays top-notch throughout the game).

Not far behind the music in this deadly 1-2 first impression combo is Stealth Bastard Deluxe’s art style. While the game is decidedly retro with its pixel-art base, the lighting/shadows really stand out and have some nice neon effects that put a layer of awesome on top of the entire graphical experience. It’s a nice modern touch that should appeal to newer gamers and retro gamers alike.

So, Stealth Bastard Deluxe sounds good and is pretty? Yep, and it plays pretty damn well, too. The controls are tight, your little clone can skillfully grapple onto ledges, and when you die (which you will do, often) the restarts are quick. It’s nothing to write home about, but that core keeps the playability high, which is important in a game with over 80+ levels. The levels themselves are cleverly designed and I found the puzzles to be satisfying right out of the gate. The first set of stages also ramps up the difficulty at a steady pace so things don’t get too crazy until you’ve mastered the basics in the first 10 or so stages. Just in time to have the first boss crush you, and motivate you to conquer the rest of the game.

Are you my friend, wall?

Stealth Bastard Deluxe’s stand out feature and crux of its puzzle design is how shadows and lighting play into your visibility to enemies and the various security systems in this testing facility. It took me a while to understand how SBD tells the player how visible the his/her character is, but once I noticed the changes to the colors of the character’s goggles, that’s when I really started having fun. Subtle and very effective.

The testing facility also has a bit of a personality, communicated in words on the walls that sarcastically pass hints and poke fun at your failures (similar to another famous video game AI). It’s a smart addition as it definitely culls the frustration that can consume you when you see the solution to a puzzle, but can’t execute on it without a little trial and error.

SBD has a lot of competition and its charming nuances aren’t necessarily noticeable until you actually sit down to give the game a try. I’m convinced that Stealth Bastard Deluxe will win over players with its polished, amusing, and addictive gameplay. SBD deserves to be praised alongside the best of the puzzle-platforming and stealth genres.