While the cheapest and dirtiest of us gamers left all of you hanging by going on vacation, I have come to your rescue. Unfortunately, I come to you with bad news. The robots are going to win. We should accept it now and probably just get as much pleasure out of them as we can before they become self-aware and fulfill the prophecy foretold in Puppy Games latest retro arcade shooter, Ultratron.

Do not get too sad though as there is an awesome twist to the robotic future as your brain, and only your brain, has managed to live on inside of an upgradeable droid. Your motivation in Ultratron is simple, seek vengeance for the entire human.

Tasty revenge for your eyeballs

I am a big fan of Puppy Games distinct style of neon retro graphics with an equally futuristic but nostalgic soundtrack. The style works, and it has worked for me for several of its games. Ultratron has quickly become my favorite game in its catalog, as I’m quite partial to twin stick shooters (over PG’s more strategic offerings).

Taking its influences from the classic Robotron 2084, Ultratron works today because of its upgrade system, its style, and its leaderboards. The shooting is as addictive as other shooters, but the fun comes from your sense of progression vs the severe difficulty offered by some of its genre relatives.

Currency for weapon, shield, bomb, turret, pet, etc upgrades come from collecting dots that fall from dead robot enemies. I particularly enjoyed the companion bots that you can unlock as I started to become more concerned about their well-being than my own characters. There are a ton of upgrades, but you can’t own them all. The game’s leaderboard encourages you to keep trying different combinations to boost your score and to advance further in the games 40 stages. 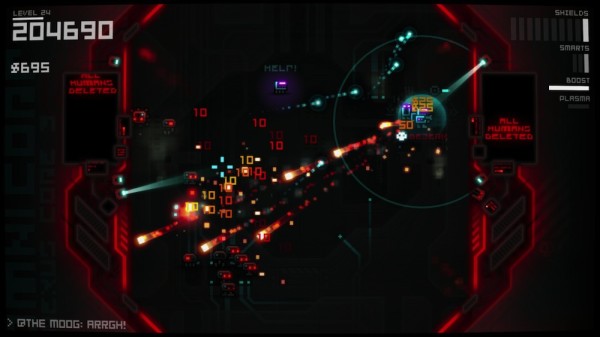 The action is fast-paced and if you aren’t careful, the screen will quickly fill up with lasers and robots. There’s also a four giant boss fights mixed in that really compliment the overall flow of the game. Of course, all of the robots look damn good while they are shooting at you and they blow up real good, too.

Ultratron is the most accessible twin-stick shooter I have played since Geometry Wars. While I’m particularly swayed the neo-retro aesthetics of the game, it should still win over new and old gamers alike. There’s a free demo available on Puppy Games website where you can also purchase the full game on PC, Mac, and Linux for $10. Ultratron is also available on Steam.