Ever since the original New Super Mario Bros. was released on the Nintendo DS, the series has been quite popular. A Wii followup added a local multiplayer wrinkle to the familiar side-scrolling madness of Mario and 4 players on-screen at once made it difficult to do anything but laugh. Now in 2012, we have two more releases in the New Super Mario Bros. franchise. New Super Mario Bros. 2, released in August, was a bit of a disappointment. The focus on trivial coin collecting and uninspired level design made the game more boring than fun to play. However, New Super Mario Bros. U for the newly released Wii U, takes the franchise in some new directions while not messing with the already fantastic formula.

As with most classic Nintendo franchises we know what to expect within the package. While that might be tired in some cases (see: The Legend of Zelda series), in other cases just adding new wrinkles to a the classic style is all it takes to maintain an air of freshness. Whether it be a new costume or innovative level design, there is always something in a Mario game that makes it different enough. This go around Mario dons a flying squirrel costume which lets Mario glide through the level. It’s not flying like with the Tanooki suit, but it does make getting to those hard to reach star coins considerably easier. Making a return to the New Super Mario Bros. franchise is Mario’s favorite method of mounted transportation, Yoshi. While you don’t encounter him on that many levels, some of his younger brethren have special abilities that make certain levels of the game a lot easier. 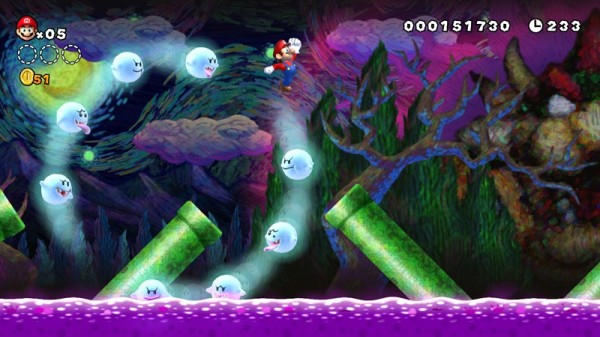 If Looks Could Kill

The first thing you notice when you load New Super Mario Bros. U (NSMBU) is the beautiful high definition graphics. Never has Mario looked so crisp and clean as he does here. The lighting, usually something that doesn’t make a difference in a Mario game, really shines (no pun intended).  The way that a fireball reflects its light on various surfaces and enemies really doesn’t add anything major to the game but those little extra touches are what Nintendo always seems to excel at.

I never really cared what a Mario game looks like because the most important part of a Mario game is the tight controls. But this jump up in graphic fidelity hit me like the leap Mario 64 made from Super Mario World. It is even a major difference from New Super Mario Bros. 2 on the 3DS. I can’t wait until the proper 3D environment Mario hits the scene. If you thought Galaxy looked good on the Wii, prepare to have your Kuribo’s Shoe knocked right off of your foot.

If you find NSMBU too easy then move to the different modes contained within. There are 5 different challenge types: Time Attack, Coin Collection, 1-Up Rally, Special, and Boost Rush Mode. Time attack is where you have a certain amount of time to reach the end of the level. Coin Collection requires you to collect a certain amount of coins before time expires. 1-Up rally is a challenge to get the most free lives as possible. Special is a variety of different challenges not found in the others. Finally, Boost Rush Mode is where the stage is auto-scrolling, forcing the player to always be moving. There are a lot of different play styles if you ever tire of the main Mario game. These challenges are mostly single player but seem to fit in well with the pass the Game Pad type of multiplayer. 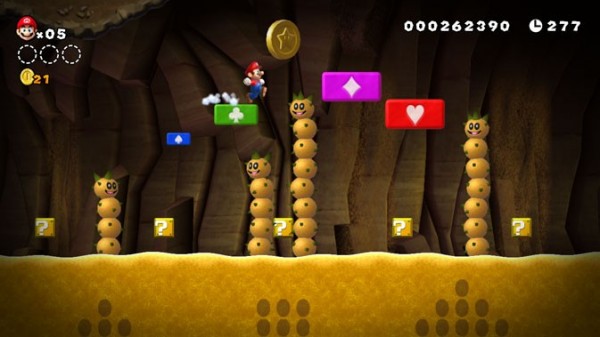 You add those platforms to help or hinder. It’s must more fun to hinder.

Admittedly, I haven’t played a ton of multiplayer but I did get a few minutes in with my wife. She was using the Wii remote while I stuck to the gamepad. It was her first time playing so I thought I’d use the Boost Mode feature. This feature allows you to either help or hinder a player’s progress as he/she move through the level by placing platforms wherever you touch on the gamepad screen. 5 players can play at a time with one on the gamepad and the other 4 using Wii remotes. It could be a lot of fun with the right group of people. A lot of cursing will take place in your living room if you have 5 people playing this at once.

A new way to play

Living in a one television household means that when my wife is home there is no console gaming going on. That’s not the case with the Wii U. The ability to play a console game while watching television allows couples to do things they both enjoy at the same time. With NSMBU, the game streams seamlessly to the gamepad and you can experience the full game on it. I’ve put in about 12 hours or so into the game as a whole with a little less than half being played only on the gamepad. Though it’s not as beautiful as seeing the game on a HD TV, the game still looks amazing on the gamepad. So much so that I even catch myself looking at the gamepad while the game is also on the TV. It’s a great benefit to have and I hope other games take advantage of the Wii U’s ability to stream games directly to the gamepad.

Not a reinvention but a refinement

New Super Mario Bros. U is a must purchase for any Wii U owner. It’s not the greatest Mario game ever created but it definitely is the most gorgeous. If you skipped on the 3DS NSMB2 then this purchase is a no brainer. If you are tired of the New Super Mario formula, you might want to spend your money elsewhere. This game doesn’t reinvent the wheel, but the tight gameplay with outstanding visuals puts it well ahead of many of the other day one Wii U games on the market.

While the total package is pretty outstanding, it is just more of the same old 2D side-scrolling Mario game that we’ve come to love over the past 4 iterations. Though the challenges have definitely lengthened the life of this title, once you have gone through them once (just like the main game) there isn’t much to go back for. Unless of course you are a completionist. However, if you have the opportunity to play multiplayer it definitely changes the experience for the better, though you might have less friends afterwards. Value Score 3/5