Mario is going on sale to celebrate himself. New Super Mario Bros. 2 is coming to the 3DS on August 19th and Nintendo is discounting a handful of his eShop games. The sales are staggered up through the release of NSMB2, but the collection features some groundbreaking mobile Mario action. 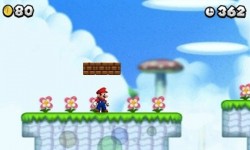 Hang out and play some Mario before you play Mario.

Definitely an interesting mix of Mario titles. I hope your thumbs are ready because your wallet has no arguments this time.