Sure, Super Meat Boy and The Binding of Isaac may be some of our favorite games here at Horrible Night, but these games also helped make game designer, Edmund McMillen, a bit of a household name. Edmund, however, may actually prefer staying in the basement if you are the type that reads into announcements for potential puns. 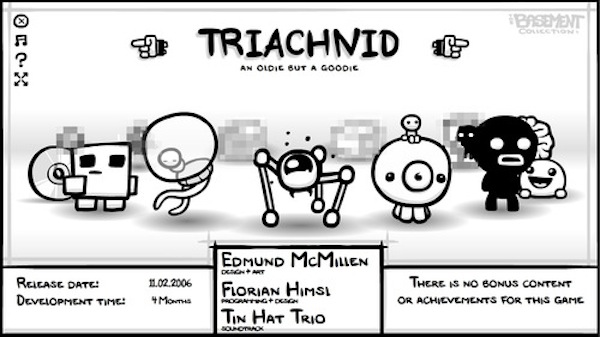 From the brain that spawned a meat boy.

You see, Mr. Edmund, has a more than just two titles under his meaty design belt. I started salivating at a few of these games when they were displayed in Indie Game: The Movie, but most of the games can only be found by those that know where to look and know they already to exist. That problem is about to end.

Edmund announced that he will be releasing The Basement Collection on Steam for $4 featuring Time Fcuk, Aether, Spewer, Grey Matter, Meat Boy (flash prototype), Triachnid and a secret game. Every game will come with bonus content from artwork to playable prototypes, while some games will even feature new content, art and physics.

This could be the greatest and messiest $4 bill you’ve ever spent when The Basement Collection is released in late August.