In my youth, I never dreamed the day would come where I could buy games directly on the console I was playing. Back then I couldn’t even imagine a world where every system could be connected to a network and no matter where you lived, you could play against friends. That is the time we live in now and whole new possibilities are opened up to us every day.

As you might have read in my YGGIA: Xbox 360 article, I recently purchased the new black Xbox. I knew going into it that the first games I would buy would be Shadow Complex and Trials HD. Two downloadable XBLA games. Normally people who buy consoles would also purchase a major title or two to go along with it. Games like the Gears of War series or the Halo franchise are usually the ones to sell systems. Not to me. I buy systems for a specific game and then discover the joys of whatever else might be out there.

I had barely seen anything about Trials HD and Shadow Complex other than a few videos and reviews that came out when those games got released. For all intents and  purposes I was going into those purchases blind and I wasn’t let down by either one of those games.

For the first time, I talked myself into buying a console based on downloadable titles and not boxed games you buy at retail stores. While this might seem strange and even stupid, this is the way the industry is heading. You can already buy older 360 boxed games on Xbox Live and I have done so in purchasing the first Mass Effect. Why go to the local Gamestop to buy a copy of Mass Effect when you can download it in the comfort of your own home and probably cheaper too. For $20 you can get that game and there are many other options at the same price. Granted they are usually older titles or greatest hits, but when you buy a console well into it’s lifetime that option is a viable one to catch up on older titles.

There are a few downsides to this service though. First of all, I kind of like having box games sitting on my shelf and downloading them electronically takes that away. Also the size of your hard drive could be a deciding factor if you decide to go the download only route. Luckily with the release of the new Xbox 360, the 250gb hard drive should take some of those concerns away. Like I said earlier, they only have older games available for download but I’m sure that will change in the future.

There are many other downloadable games to purchase to, not just ones that have been released on physical media. The Xbox Live Arcade has become a place for independent studios to make a name for themselves. Games like Braid and the upcoming Limbo wouldn’t have been made without the ability to put them up for sale in an online store setting. I can’t forget to mention all the great and weird games that are exclusive to the Playstation Network as well. But it seems that Microsoft is doing a better job at getting more current games available to download than Sony has been. Either way, both systems offer a lot and a gamer can go a long time without buying a single box game and be completely satisfied in their purchase decision. 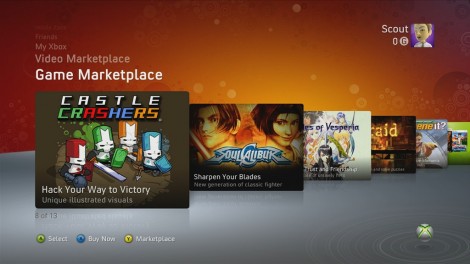 You can buy games here.

As gamers, we can only benefit from the new and exciting ways that companies are delivering game content to us. Most of the games on XBLA would never see the light of day if it weren’t an option. There are also some great games available on the PSN, but there are a lot more options on Microsoft’s console.

I want to see how long I can last without buying a boxed game. With peer pressure from JDevL and Coopopolopolis to buy Left 4 Dead 2, I don’t see myself holding out much longer.