It seems with every release season there is a game which surprises you and leave an impression you cannot shake. I met Alan Wake’s American Nightmare with much reservation. When I first heard the story I immediately thought of Stephen King’s The Dark Half main antagonist, George Stark. This is what created a little bit of my reservation. I was a fan of its predecessor, Alan Wake, but both games have vast differences which gives American Nightmare the feeling of something special. Whether or not you played the original Alan Wake you can get right into American Nightmare and immediately grasp what’s going on. Any and all of my original reservations toward the game eventually slipped away into the shadows.

You play as Alan Wake, a fiction writer who has been separated from the world and his wife and trapped in a supernatural dark place trying to find a way home. Everyone believes you are dead, but now you’re hunting down your doppelgänger, Mr. Scratch, who wants to become Alan in the real world. The problem: Mr. Scratch is a bad, bad entity who will hurt everyone in his path including Alan’s estranged wife, Alice. You’re dropped in a fictional Arizona setting of Night Springs to hunt down Mr. Scratch.

Many of the staple elements of Alan Wake are still here and most have been improved. Light is your key weapon. The enemies you face do not take damage until the light removes the shadows enveloping them. The controls feel great, and the lighting effects are fantastic. There were several moments in which I thought I saw something lurking on the edge of my vision and turned quickly to find nothing there. There were other great “jump scare” moments in which something “appeared” around the corner or directly behind me without warning. These little moments kept the suspense on high the entire time.

These elements are what I love about the suspense of American Nightmare. The game feels more like an action game than before, but there are still moments where you keep your “head on a swivel.” The pacing of the game is right on queue, and I absolutely found the story fluid throughout. There are a lot of nods to the previous game, but if you have never played Alan Wake before, you will still find interesting. You will still hunt for manuscript pages from Alan’s writing and radio broadcasts featuring a cast of characters from before. 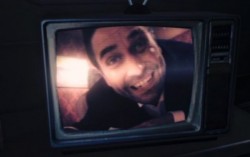 Some of my favorite moments are the live-action video scenes that are played on televisions throughout the game. You will get a good look at Mr. Scratch and learn a lot about what he’s doing and why. He talks to Alan through these moments, and you will find out why Alan wants him gone. The other great thing about Mr. Scratch is there is a tangible, physical antagonist this time around other than just the Darkness.

A minor complaint I have is some of the voice acting of the characters Alan comes across – there are times in which I feel the actors didn’t quite really understand the situation they were acting out, and there are other moments in which the humor injected felt out of place or attempted to reach too far. These moments are minor in the scope of things as the story and action kept me moving forward.

The Darkness has a few new tricks

Perhaps some of the most exciting elements about the enemies in the game are the different types of Taken you come across. The Taken are shrouded in darkness, and the light must burn it away before your weapons can hurt them. Instead of your run-of-the-mill enemies, Mr. Scratch and the Darkness have some new tricks. You come across the Splitter, who isn’t protected by darkness but will split in two when coming into contact with light. The Spectre can turn into a flock of birds and appear in another location to flank you. There are spiders (the new infatuation replacing zombies), and they like to come at you in larger numbers. The Grenadier will heave darkness grenades which disorient and hurt you. Finally, there’s the Giant who wields massive power tools and can absorb an absurd amount of damage. 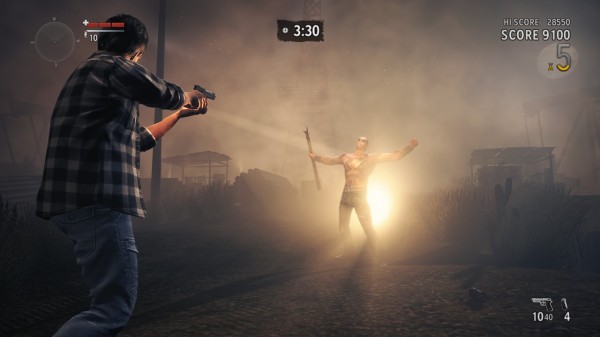 Tanning beds are more expensive than this approach.

The little differences between the Taken keep you on your toes and make you really consider fight or flight. The most difficult areas to engage the enemy are in close quarters. When the Taken swarm you from different sides it can become a chore to fend them off. I found myself looking for escape routes and vantage points so I couldn’t be consumed on all sides.

The new mode included in American Nightmare is the arcade mode in which you attempt to survive until dawn while waves of Taken attack. There’s something frantic about the 10 minutes you spend evading the enemy and seeking weapons and ammo. I didn’t think I would enjoy this mode, but I found myself liking the panic I felt while searching for more flares and weapons to deal out damage. This mode comes with Leaderboards so you can compare your scores with your friends and you can unlock harder “nightmare” difficulty levels for more of a challenge. There is no benefit to the story by playing this mode, but it’s great if you have some time to kill and want to test your survival skills against the Darkness. I found myself pleasantly surprised by the arcade mode.

The game isn’t very long. It’s a downloadable title and notably shorter than the original, but I think for the subject matter and gameplay, it perfectly suits Alan Wake. American Nightmare does have a few tricks up its sleeve with a few twists in the story, but it does a great job of not making you feel like you’re just going through the motions. Little tweaks to the story makes the game feel fresh throughout, and when the game is finished you are left with a sense of closure and enlightenment to Alan. Alan Wake’s American Nightmare feels like a AAA title with the lovable underdog qualities of lesser titles, and when I finally put down the controller I felt as though Alan Wake is finally where he belongs.