Microsoft decided to make a big impression on the Xbox 360’s newest apps by making the pay-per-view event, UFC 141, available on Xbox Live. The event was so important and such a big deal for Microsoft they gave away thousands of codes for users to watch the fight for free. Unfortunately, the fight was marred with streaming issues ranging from high definition to standard definition to no definition. 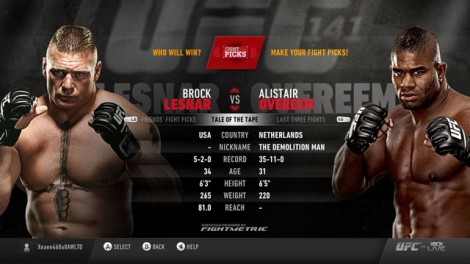 “At this time technical issues for UFC on Xbox LIVE persist and are preventing the 25,000 fans who were granted free access from viewing UFC 141,” Microsoft stated in an e-mail after the fight began. “We’ll continue to work on resolving these issues throughout the evening, but are encouraging consumers to seek alternate means for viewing UFC 141.”

It’s been no secret Microsoft wishes for the Xbox 360 to become the premiere entertainment system and most recently added a number of apps to make this happen. This misstep causes some legitimate concerns of whether or not Xbox Live is prepared to handle the already massive multiplayer gaming network along with streaming capabilities.

I guess the real good news is if you had to suffer the crazy picture or no picture at all during this fight Microsoft is willing to pay for your next UFC event on Xbox Live.

Did you have access to this event? Did it effect you?