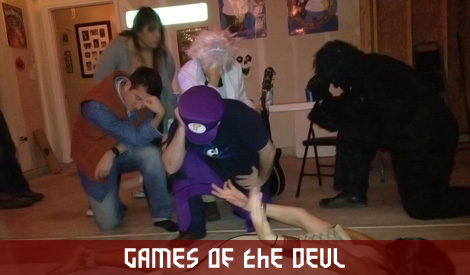 It’s no secret that there were no shortage of great games this year. The tone was set early when I blew through a solid sequel with no standout flaws in Dead Space 2. Throughout the rest of the year there wasn’t much separating these games. I found myself with around 22 games that, in most years, would make my overall list and aside from one, none of them was a standout. That’s when I realized I had a wonderful problem because, for the first time in a long time, I started separating my list based on just how memorable each individual game was to me. It was painful to make some of the final cuts (especially involving one of my favorite franchises), but looking at my video game representatives of 2011 a huge smile comes across my face because this year was a hell of a lot of fun. 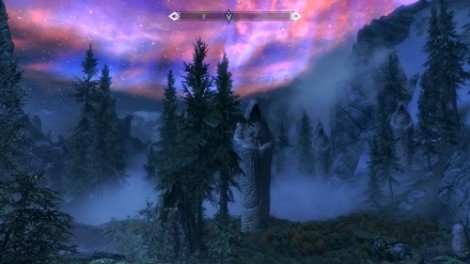 1) The Elder Scrolls V: Skyrim – I wasn’t even supposed to play Skyrim in 2011. It was supposed to be some above-average RPG that I’d dive into during a down period in 2012. As soon as it was released though, it became clear that it was the must-play game of the year. After failing to give in to previous Elder Scrolls games, I still didn’t expect Skyrim to grab me. The explorer in me though, never stood a chance. Skyrim is the kind of game I dreamt about as a kid, but never knew it would be possible. I’d be satisfied with just getting lost in this huge world full of interesting quests and mysterious locations. Except Bethesda went ahead and added random dragon encounters on top of my blissful wandering. I’m in awe of Skyrim, it’s a game that I won’t soon forget, and I’m not really sure if I’ll ever be done playing it.

The Kid has this handled.

2) Bastion – The game I couldn’t put down until I was done with it twice. Bastion has a lot of other redeeming qualities like its amazing art direction, the soundtrack of the year (in our opinion), and the definitive video game narration experience that you never knew you wanted. The attention to detail related to how the player plays Bastion is not something you expect from a downloadable title. If sheer level of polish isn’t enough to pull you in, the story will. The Kid benefits from having a similar silent protagonist feel to a classic Link character, and the action/RPG weaponry and leveling up will draw in gamers as they try and discover why the world is completely in ruin. It builds to a terrific climax that resonated with me for the rest of the year.

Marcus, time to go to work.

3) Gears of War 3 – I was really nervous about how the Gears series would conclude the story of Delta squad. This was, after all, the series that pushed me into this generation of consoles and introduced me to HD gaming. After running completely through the final campaign and a full run of horde mode with plenty of competitive multiplayer along the way, I look back at Gears of War 3 and I have absolutely nothing to add. This is the best Gears game, it’s the most fully featured and balanced game for single player and multiplayer fans of the year. The action has never been tighter and I loved that, by the end of my time with the game, I was struggling to decide between the classic lancer versus the retro lancer for my favorite way to kill my enemies. While the story shouldn’t be the draw, it gets a lot of respect from me because it works so well within its limits and also ties up the all of the loose ends it should. Sure, the Gears universe will live on, but players will satisfied that they have finished the story they started in 2006. Not every trilogy can say that. 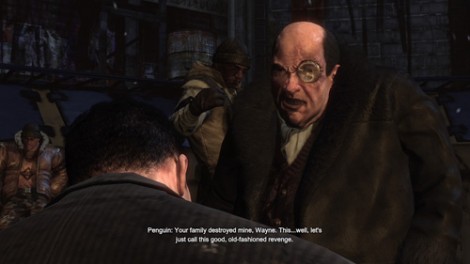 You don’t mind if I steal the spotlight do you?

4) Batman: Arkham City – I’ve never been the Batman more than this year. I write that with the largest and dumbest fanboy grin imaginable. Rocksteady’s Batman games are pure bliss for me as a gamer and a fan of the Bat himself. Arkham City (with its silly premise that serves as an excuse to give Batman an open world to run around in) ended with a bang, and will forever stand out in my memory because of the major story beats. Again, like Gears, it’s not the deepest story around, but for sheer entertainment level for fans, it is spot on. Every villain encounter is treated with gravity and could stand on its own as an individual game; the fact that Rocksteady takes on so many villains and makes everything work together is the most impressive feat. Well, on top of their flawless fighting system that once again had me beating up thugs just because it was fun while I figured out what side mission I wanted to tackle first. The side missions (aside from too many Riddler trophies) are also stellar, with each one leaving me with a desire to have one more round with each villain.  There’s nothing more I could ask out of a Batman game, other than: don’t rush out a third one without changing things up because this is as good as this style can get and the impact is softening.

He’s so happy to try to kill you.

5) The Binding of Isaac – Isaac was a low-risk purchase, but the rewards haven’t stopped. When I saw screenshots of Edmund McMillen’s game, that instantly reminded me of dungeons from the original Legend of Zelda I was in. But Isaac is a bit twisted, and I like twisted and battling evil Mom and her satanic minions. The Binding of Isaac can be beaten in 30 minutes or less, but every dark trip feels different than the last as the bosses, enemies, power-ups, and levels get mixed up every time you play, so no play through is the same. It can take you days of playing before you fully understand what each item does, and by the time that happens, chances are there has been a free game update that has added more. Even after I thought I was done with Isaac, I still find myself playing the game as I figure out what larger game I want to play and I always find something new that makes me like the game more in the mean time.

Sequels had a tough time standing out with me this year, especially amongst each other. However, do not make the mistake of thinking Skyward Sword is just another Zelda game. Saints Row: The Third reminded all of us that video games are supposed to be fun and you can never be too ridiculous. The Superbrothers showed all of us how to finally make use of all of the controls on our mobile devices while at the same time giving us an incredible adventure. Rayman Origins was the most beautiful thing to grace your TV screen if you gave it a chance.  Finally, if you had the chance to meet Garcia “Fucking” Hotspur and his Johnson, you are doing it right.

Some are already saying 2011 is the best year in video games. I’m not ready to cast that vote yet in a year defined by incrementally better sequels, however, the sheer number of great games can’t be denied or put in any agreeable order for that matter. There were too many games to play, and it’s a problem I love to have that we can hope 2012 is ready to repeat along with a few more blown minds.