Indie games stole the scene a bit towards the end of the week after game announcements and patches reminded us we had other games to finish. Ludum Dare was back and it brought us a crop of games in less than 48 hours, that is if you have time for these games after the best Humble Bundle yet. The Horrible Show went live this week as we tried to select our game of the year categories while trying to get as much game coverage wrapped up before voting begins. 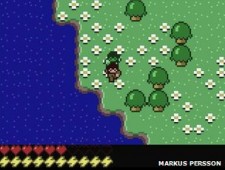 Sometimes I make another version of my game in 48 hours.

Notch live-streams making a game in 48 hours, listens to dubstep* – Joystiq
“Such a cool competition, had no idea it happened this often.”

LEGO Lord Of The Rings Sets Coming This Summer – GameInformer
“Yes! Sign me up for the Fellowship.”

Tony Hawk Pro Skater HD soundtrack likely won’t be identical to old games – Joystiq
“This will upset a few fans, including those on our staff.”

Sony confirms Ueda’s departure; The Last Guardian to be completed on contract – Joystiq
“Wonder which side was causing more of the delays though.”