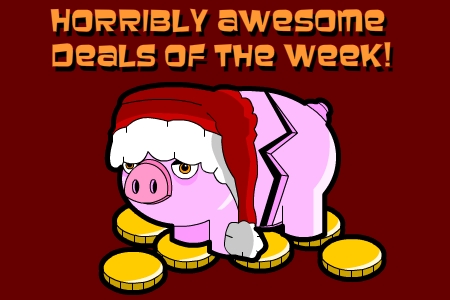 The season of giving is upon us and, if you’re like me, you’ve more than likely procrastinated purchasing gifts for your loved ones. I’ve actually procrastinated writing this article, so instead of breaking down the hot deals of the week, I’m going to instead point you in the direction of the best places to shop.

Let The Deals Rain From Above

Steam – For those of you that own a PC, Steam is hands down the best place to go for deals. Its currently running a daily special on games and publisher catalogs that goes through January 1st, so check in daily and I bet you’ll find a game that’s been on your list for some time.

Direct2Drive – Direct2Drive has pretty consistent deals throughout the year, but their holiday sale leaves a lot to be desired. Still, I’m comparing that with Steam which isn’t fair and D2D does have a few niche games that Steam doesn’t.

Indievania – This is the place to go for those of you that think AAA games suck. While both Steam and Direct2Drive have indie games featured, Indievania has quite a few titles that neither has. The game developers also get 100% of the profits, which is a pretty sweet deal.

Gamefly – If you’re ok with your games having a bit of mileage (literally) on them, GameFly has once again turned out some ridiculous used game prices. Sure you can by them new, but some of these games have travelled the entire country and can teach you a thing or two since you have trouble leaving your couch.

Xbox Live – Live has a countdown to 2011 sale going on that features a week of discounts on a number of different items as well as a different daily sale (todays happens to be Fallout themed, YEAH).

PSN – I was actually surprised by the amount of sales content on PSN, though I’m pretty sure you’ll have to update your system before you can take advantage (assuming, of course, that the network is up).

Amazon – For those of you without a PC, Amazon has 50% off quite a few different console games. This tends to be the go to source for cheap games amongst the Horrible Night crew and often times shipping is included.

Gamestop – If you can brave the sometimes annoying staff and the jerks arguing over the cash they get offered for their Sega Dreamcasts, Gamestop actually has some pretty solid deals going on. I have a gift card there and am thinking that I might stop by, most likely early in the morning while it’s still dark.

Target – Target has done it’s best to offer up a few solid discounts, but I think they’re too busy trying to be trendy to actually realize now is a perfect time for video game sales. The 3DS is $20.00 off though, so why not buy one for your kid or a friend’s kid? On a side note, Target sushi is not quite as horrible as you might think.

Best Buy –  Best Buy is pretty week in terms of their game deals online, so you may want to check out your local paper or actually leave your house and investigate on your own. definitely not the best buy for gamers.

Toys’R Us – Toys’R Us has a “buy one get one 40% off” special going on now, however unless you’re a fan on Nintendo, Disnye Games or handhelds then this may not be the place to go. Besides, grown men and women probably shouldn’t be wandering around this store anyway.

Wal-Mart – Don’t shop at Wal-Mart, their deals come from sacrificing infants to demons.