I either missed the initial wave of excitement about Alan Wake when it was announced at E3 in 2005 or I had completely forgotten about it since it was so long ago. My discovery of the game came in 2009’s E3 presentation, where the video footage absolutely blew me away. I could immediately tell that this was a story that I wanted to get lost in. I love it when a game tries to mess with my head. I was sold on the premise and the trust that Remedy could deliver the gameplay goods with Microsoft keeping an eye on the production values of the rest of the game.

Alan Wake is billed as a “psychological action thriller” and curiously leaves the word “game” off of most of its advertising. You play as Alan Wake, a famous writer, who has arrived with his girlfriend, Alice, in the northwestern town of Bright Falls in hopes to put his recent bout of writer’s block out of his mind. Alice soon goes missing after she and Alan have an argument that causes Alan to storm out of the cabin. Alan is convinced that Alice has been taken by a dark presence that has been following him around the town at night. Townspeople start getting controlled by the darkness and attack Alan as he tries to find answers. Manuscript pages show up in Alan’s path, and appear to come from a story that he has written but doesn’t remember, and the story is coming true around him. Alan has to save Alice before he completely loses his mind or his life to the dark presence. 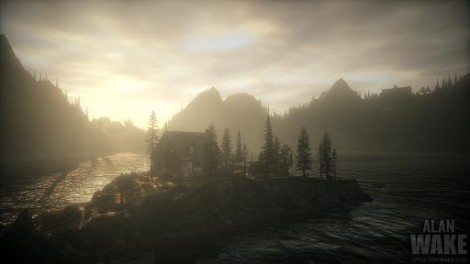 Get Lost in Bright Falls

A lot of care has been taken to craft the story and characters of Alan Wake. The town of Bright Falls itself may even be the most mysterious character as you are never really sure the town is crazy or if Alan is just losing his mind. The game is broken up into episodes that mostly stand on their own. Each one leaves you with the reveal you’ve been chasing, but only uncovers more questions to lead to the next episode. As such, the pacing of the game is always pushing you forward, and you’ll be hard pressed to not want to finish this game in as few sittings as possible. I expected a 6-8 hour adventure, but put a solid 12 hours into the game where I only managed to find about 2/3 of the collectible items. One collectible, the manuscript pages, creeps you into the story even further by mixing up pages of events that have already happened and foreshadowing the horrors to come. I only wish the manuscript pages would have been incorporated in such a way that you didn’t have to read through them one by one in the game’s menu. Alan continuously makes meticulous vocal observations as he wanders through Bright Falls, which just pulls you further into the rich atmosphere of this interactive experience.

It’s not all story telling and discovery, however, there is a dark presence to be fought and this is where the game will be hit or miss for most gamers. You will come across a sparse number of  different enemy types that are mostly people or birds that have been taken over by the dark presence. In the dark these enemies are invincible so you must use a combination of your flashlight, flares, and environmental light sources (spotlights, etc) to destroy the dark presence before you can finally shoot down your corrupted foes with traditional guns. Combat doesn’t vary too much as the game progresses, as these foes are more or less just in your way as you move from point A to point B. You need to manage the battery power and ammunition ever so slightly, but rarely do you run out of weaponry completely. In those few instances, running to the nearest light source will protect you and scatter the enemies into the darkness. One major annoyance was after every minor climax that would take you to a new location, Alan tends to lose all of his equipment from the previous scene, including his flashlight. So every scene begins the same way, with you having to be careful until you eventually find the major stash of weapons for that level. The combat presentation is exceedingly stylish and creepy, but aside from the de-facto major battle per chapter, the action is repetitive and more of a hindrance to progressing the story.

Towards the end of the game, I was fighting my way through enemies on reflex and the scares had gotten old. I was about to take a break before coming back to finish the game, and I read about an achievement that you earn by surviving the next section of the game without firing a shot from any of your guns. This turned out to be the most exhilarating part of the game for me, as I darted from safe haven (light source) to safe haven, dropping flares to keep enemies as far away as possible. I had to carefully manage my flares and flashbang grenades, using them at just the right time. It’s too bad I had to create the thrill of survival myself, rather than have the game do it for me as the last 1/3 of the game could really use an adrenaline shot inbetween story sequences. 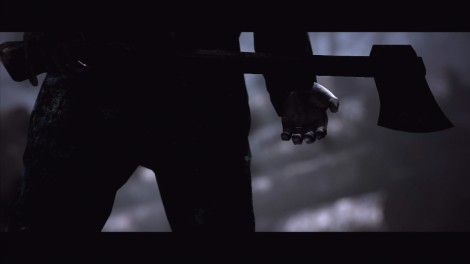 Luckily they only carry axes

Moving through the forest while the dark presence is swirling all around you and corrupted woodsman emerge from the shadows is intense and memorable. It arises a sense of panic and claustrophobia that matches and exceeds some of the best games in the survival horror genre. The problem with the graphics though is when everything slows down and the effects aren’t present. The game looks the best during the action sequences in the woods, but the story excels in town and when Alan is interacting with other characters. The characters and structures look blocky and flat. You ignore it after a while because of the quality of the audio and the story, but I found myself in a constant struggle between being annoyed and immersed in the game.

At This Point, What’s The Rush?

My biggest gripe with the game is just how badly lip syncing is for every character. Fishfaces for everyone. It is jarring for a game this polished and for a game that emphasizes its story above all else. I really fail to understand where all of the years of development went to unless they kept altering dialog and story elements up until the very end. Even then it seemed like a bad joke when I was watching the first cutscene. What was the point of putting this game out now with such a glaring fault? How was a few more months of polish going to hurt it when we’ve waited this long? In comparison to other average games it isn’t that bad, but for a game that was at one time supposed to be a flagship title for both Remedy and Microsoft, it’s incredibly disappointing when other AAA titles are able to pull it off.

Alan Wake is an amazing experience. One that I won’t soon forget, but more for reasons that I relate to movies than to games. The game elements just get in the way of what makes Alan Wake great. You can dismiss the repetitive gameplay and the horrible syncing issues, but it all ends up feeling like a missed opportunity. I look forward to the DLC and to exploring what’s next for Alan Wake and Bright Falls, but I’d sooner just watch it than play it. I can’t help but think that somewhere between the strengths and weaknesses of Alan Wake and an interactive story like Heavy Rain, we will have a new type of genre emerge soon. Heavy Rain seemed to be interactive experience that felt it had to include game elements, on the other hand Alan Wake had some potentially interesting gameplay left shallowed by its engrossing story elements.

You Can’t Have Both

My advice for Remedy is to step back and look at the true strengths of the world of Alan Wake, don’t force us to play a game that no longer wants to be a game. As a game Alan Wake is just average through and through, but as purely a “psychological action thriller” Alan Wake is a only a small step away from greatness.