Meanwhile… we’ve actually been playing games. Each week we recap our recent gaming experiences and tell you what we’re looking forward to, so you can use your time more wisely than we have. I don’t know how I expect our readers to take us seriously when we can’t even listen to the advice we give each other. Stay away, these games will run your life, and you’ll love every minute of it. 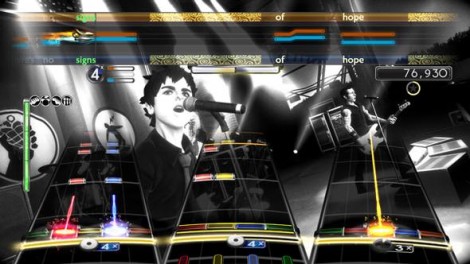 JDevL
My focus has shifted, I will be a pop-punk cowboy all week. As a die-hard Harmonix fan with a passing interest in Green Day, I will be picking up Green Day: Rock Band this week. It should be good for some unexpected sing-a-longs at the next game night. In between sets, I will be continuing to stalk the wildlife of New Austin in Red Dead Redemption. Knifing 5 wolves is much more important to me than advancing the story at the moment. Oh, and if you couldn’t tell, I gave in and bought Red Dead this weekend. More on that later.

Jadetiger CG
Played very little Alan Wake this week. Got through half the game on nightmare mode when I just got too bored to continue. Again, rent it; don’t buy it. I played the new maps for Modern Warfare 2 quite a bit. Have to say overall, I really enjoy them. And I greatly enjoyed double exp. Hit lvl 66. Hoping to go Prestige next by weekend. Briefly on Sunday and dug out Halo 3. I’d been playing COD so much, I couldn’t get back into it. It felt painfully slow. Did play a couple rounds of Grifball tho. Nothing like eight people running around with Grav hammers smashing the crap out of each other. Highlight of the week: shooting someone in the ass on MW2 and getting a head shot.

EndlessBen
I got myself a copy of Alan Wake so I am continuing to play through that during this busy week for me. My roommate is playing a game called “Scare the Bejeebus out of Ben While he is Playing Alan Wake in his Room, In the Dark, Alone.” I think he’s really been enjoying that one. I also, against my better judgement (and Justin’s) downloaded Trials HD after our podcast discussion last week. It has been a really addicting and, for the perfectionist/completionist in me, a really frustrating experience.

Colefacekilla
For the third week in a row Red Dead Redemption has been the game seeing all of the action in my PS3. The Wild West is a refreshing change of scenery for the GTA-style game. It’s definitely going to be hard to say goodbye to this game.

Robeque
Been playing some Red Dead. I sit down and play 2 or 3 missions at a time and usually end up getting distracted with some side mission or another while I’m at it. I’m still enamored with the environment in that game, though the core of it to me is GTA. I love GTA, so that works for me, but I do get a little bored with that gameplay after periods of time and have to take breaks. I’m not quite there yet, but can maybe feel it coming on soon.

Blue Awesome
I’d say I won’t have time for games this week, but I know I’ll end up making some. Since I finally finished Red Dead Redemption, I’ll probably go back to Just Cause 2 for a while, or hit the skies in Snoopy Flying Ace. Look for the avatar that looks like Charlie Brown. That’s me.

3 Comments → Meanwhile… No One Listens To Me, Even Me