Well, the sequel to the game that won game of the year in 2008 has come out. BioShock 2 brings you back to the underwater city of Rapture, where you get to fill some big, not to mention heavy, shoes. The campaign starts off revealing your role as a big daddy prototype. It’s been ten years since the death of Andrew Ryan and Frank Fontaine, and some new characters have crawled out from the shadows to claim their share of Rapture. I was glad to see the same steam-punk and gothic styled architecture with some splashes of color from the reefs that have slowly begun to grow on the inside.

I got through the campaign in a couple days. The story was not nearly as exciting and surprising as the first. In fact, I found the final conflict between the main villain and the user’s character to be very anticlimactic. The big twist was far from being shocking. I would even go so far as to say it was expected. Without giving too much away, there is a character who helps you throughout the whole game, and when you finally get to them, they tell you that they want to ….wait for it…continue helping you! Wow, now that s good writing. Gameplay is still great, there s a few new weapons and plasmids to look forward to. 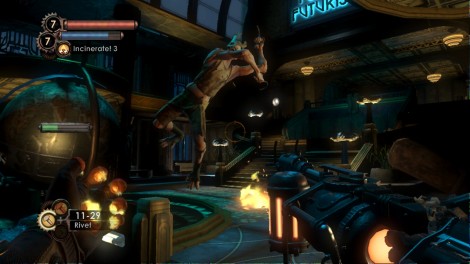 Now let’s not forget the multiplayer. It takes a while to get used to, but I actually enjoyed it a lot. Spent quite a few weeks leveling up my character. Basically, it works just like Call of Duty, Rainbow 6, Bad Company kinda game. You have levels and the more Adam (exp) you earn, the more you unlock. Once you’ve played a bit, you can customize your weapon loadouts with different weapons, plasmids, and bonuses. The key to leveling up quickly is looking at the trials and making the effort to specifically complete them as you play. Gameplay is pretty much like any multiplayer. You have free for all, team, capture the sister (flag), territories, keep away, etc. There are a few differences with the gamplay in the multiplayer vs the campaign, especially when it comes to health and eve. Rather than explain it all here, I say experience is the best teacher. There’s a little story weaved into the multiplayer as well. The events take place just before the plane crash in the original BioShock. As you level up you’ll unlock audio diaries of the characters you can play as, and you get to hear how they slowly begin to lose their sanity, like everyone else in Rapture. Your character has an apartment you can walk around in, listen to messages, customize your loadouts, and a wardrobe that allows you to change masks and melee weapons.

Overall I’d give BioShock 2 an 4 out of 5. Aside from the disappointing finale in the campaign, I still very much enjoy the environments, characters, gameplay, and the new multiplayer mode. Stock up on Eve and keep splicing! 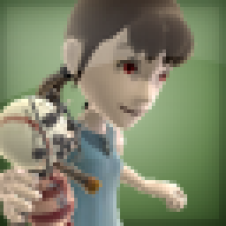