My wife’s gaming habits are strange. She likes point and click adventure games like Myst and Monkey Island. But she also likes puzzle games like Zuma and Angry Birds. However, on certain occasions she’ll gravitate towards a game that I had no idea she’d love. When she first played New Super Mario Bros. on the DS, I had a hard time getting the handheld away from her. She beat the hell out of that game. When it was announced that New Super Mario Bros. was coming out on the Wii, I was in trouble. My hobby was being taken over. It’s been awhile since she played New Super Mario Bros. Wii but I wanted to ask her a few questions regarding her experiences. 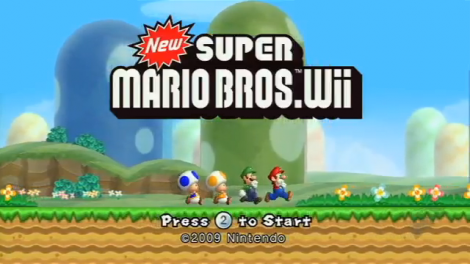 What did you think of New Super Mario Bros. Wii when you first saw it?

I played the DS version first, but I found that with Mario on Wii had I to get used to the waggle. I was happy that I finally got  to play Mario and not just watch. When I was younger my cousins always had Nintendo and wouldn’t let my siblings and I play, so we could only watch. It was pretty great to finally play and not sit on the sidelines.

How long did it take you to like NSMB Wii?

Like, zero seconds. Again, I finally got to play, plus I like 2D sidescrolling games. I get a headache when I play the 3D ones and I get lost. I don’t know if I’m ever in the same place or a different place.

What makes you keep going back to NSMB Wii?

The 2D sidescrolling, the hidden coins, unlocking secrets, beating the monsters and I have to collect everything. If the game had achievements I’d be a whore.

In the DS version you could become really big Mario, did you miss that power-up?

I didn’t miss it. Even though I could cheat the system and get a ton of free guys (using the big power-up), I learned a different trick in the Wii version that also gave me a ton of 1-ups so it didn’t matter. 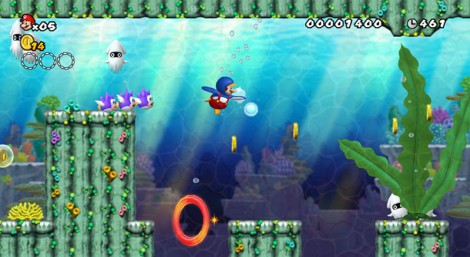 I hate those purple fish.

What was your least favorite level?

One of the water levels because of those damn Mario-seeking fish and the bubbles that would blow you into places you didn’t want to go.

Did you like the new multiplayer aspect of NSMB Wii?

Not really. It was a madhouse. I only played a few times with some friends and we could never finish a level. It became so frustrating that we decided to just pass the controller. I would let Cole help me out a few times to get those hard to reach coins, but once I got the coins I made him put down the extra controller so I could continue on my own. I’m slow and steady where he just blows through each level. It makes me nervous to play that way.

How would you describe NSMB Wii to a friend in order to get them to play it?

It’s a game when you go through Heaven, Earth and Hell. You travel through the sky, on land, and lava in hopes of finding this extremely needy princess that is stupid and keeps getting kidnapped by an oversized lizard trying to compensate for his non-good looks by being angry. She doesn’t know how to do anything. In the mean time you get really rich by collecting coins and you get big by eating magic mushrooms. You also get to fly.

What would make this game even cooler, is if you could actually be in the game like the Star Trek Holodeck.

A little advice to those gamers out there who like to trade in games: don’t trade in games that your significant other loves. Speaking from personal experience, it’s not a fun conversation to have. Plus you’ll end up just having to buy the game back so it’s more expensive for you in the end. I don’t know why I even traded it in. I love the game too. Now that we have the Wii hooked up to the secondary TV, it might be time to purchase it again so we can both game at the same time!