When finding a lifetime mate, people often look for individuals with similar interests to their own. I definitely had this in mind when compiling my own top ten list (before meeting my wife that is). I wanted a girl that liked drinking beer, loved watching the UFC, enjoyed the outdoors and in a perfect world, was as avid of a gamer as I. I imagined swapping games, having all night gaming sessions (followed by early morning humping sessions) and holding conversations about the classics that didn’t include the question “What is a Mario?” 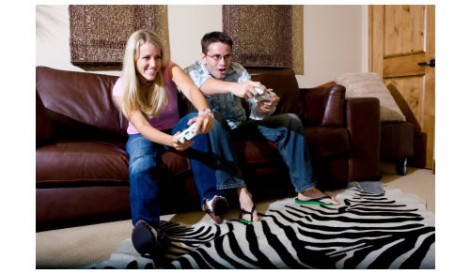 A zebra rug only makes the fantasy that muc more enticing

Fast forward to today and I’m married to a woman that only meets the beer drinking criterion (though she prefers red wine). From an outsider’s perspective, one may think that I settled and am now dealing with a miserable lifetime sentence, but that couldn’t be further from the truth. Things are great and I couldn’t be happier. If I have any complaint about my marriage, however, it’s that she thinks video game are a complete waste of time, though she is as supportive as she can be while harboring such a red hot hatred of the medium. I do my best to explain plots, characters and mechanics, all in hopes of helping her understand why I have such an affection for gaming, but to no avail. There would be times, when her harassment over my anger at a low kill to death ratio on Bad Company 2 would become too much and I’d be forced to lie awake in bed, hoping for a falling star to make a wish upon, a wish that would turn my wife into the game loving girl I thought I always wanted. Then I really started thinking about life with a gamer, and reality set in.

Currently, I have complete access to all my video game consoles at any time, but life with a gamer would mean that at least one console would be off limits while my spouse battled through her current obsession (keep in mind that should Fallout: New Vegas or Mass Effect 2 be that obsession, it could be months until the system opened up). It made me recall the days when my three brothers and I fought over the single system in our household and the arguments and wrestling matches that would explode into our living room when one Moses boy was taking too much time. Marriage is tough enough without full nelsons and double leg take downs being the solution to marital disagreements. 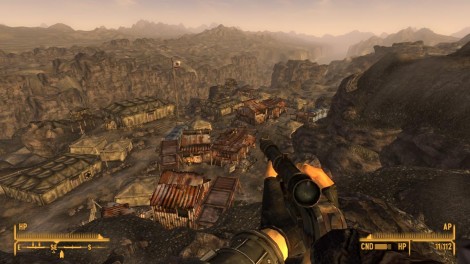 100 Hours for one person is already long enough

Game purchases should not be left to a vote

In addition to sole occupancy of the gaming in my household, I also make all game purchasing decisions as well. The lack of democracy makes game shopping easy, but what if my wife wanted a piece of that pie and our genres didn’t match up? Imagine if she only liked sports games or railroad simulators (which, if one looks at Steam, you’ll see those can be quite expensive)? Right now, I rarely struggle with picking up all the games I want when they’re released, but should our gaming budget include two perspectives, things might get a bit tough. I can only imagine how heated things would get if she was a 100% handheld gamer.

The competitive all nighter seemed to be a fantasy in the past, but the implications could make things look more like a nightmare. The one thing that prevents me from losing myself in a game and soldiering on into the wee hours of a workday is my wife (I do have some self control, but putting Dead Space 2 down mid-campaign is so freaking tough). Should she be as excited for a title, we’d both be victims of game hypnosis and lack of sleep could bleed into our professional lives. As awesome as playing games all day and everyday would be, unemployment is not so awesome and would make acquiring further future systems and titles all but impossible.

Sinking into the gamer Cave

In addition to professional status, I could see our personal lives deteriorating as well. Again, when locked in with a certain game, it’s tough for me to peel away and find reasons to leave the house. I’ll admit, I need a bit of a push to go out and have dinner with friends; not that I don’t want to but it’s often easier to just shoot aliens then talk about jobs, politics, etc. My wife tends to be the event planner for us, and while I don’t exactly love all the events that are planned, it keeps me well rounded and socially active. Should she decide that zombie hunting took priority over a birthday party or holiday celebration, we might find ourselves disconnected from the outside world. It was bad enough when we stayed in bed and watched Weeds all day, imagine if we go locked into World of Warcraft at the same time? 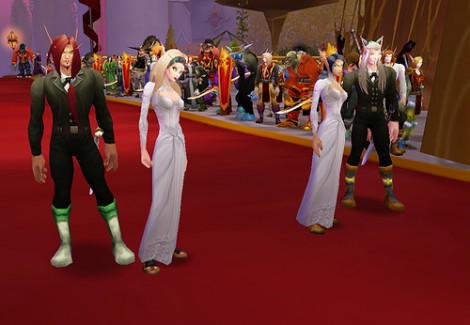 As close digitally as they are in their marriage, until guild conflicts end with divorce.

Should we make it to a social gathering, people would probably hate us as we desperately tried to interweave video game knowledge into casual conversations. “Wow, congratulations on the promotion Dave, did I mention that my wife just got all the achievements on Gears of War 2? You’re pregnant Kathy, that’s great! You and Bill have been working on that a long time, almost as long as Aubrey and I have been working on triple Modern Warfare 2 prestiges.” I can only imagine how uncomfortable people would get when an argument over the decline of FPS games erupted into a screaming match (gamers are passionate folks, married or not).

This is not to say that gamers can’t meet, get married and have perfectly lovely lives full things that aren’t just video games, but for those that have a single-minded focus on making this connection happen, be wary of the problematic possibilities that might arise. Personally, I’m a better man based on the fact that I have a wife that compliments me while “dealing” with my interests with as much enthusiasm as she possibly can.

3 Comments → Think of the Adults: I’m Glad My Wife Isn’t a Gamer