For the past month, the Cursed have sawed through the juicy Gears of War 3 multiplayer beta. With the beta officially closed and the blood dried, we check in with Andrew, the Justins, and JP to see what Gears 3 is doing right and what needs a bit of work before the full release this fall. 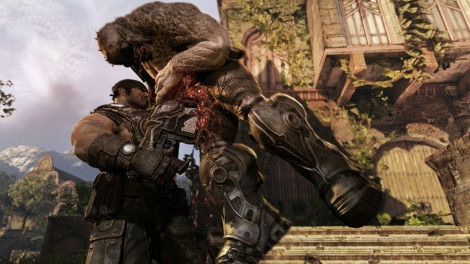 I’ve been looking forward to Gears of War 3 ever since the announcement. It’s by far my favorite Xbox franchise, but I’ve never really gotten into the multiplayer. I tried with Gears 1, but I found it extremely frustrating. I wanted to be good, but I wasn’t. The game play was so different than any of the other games I was into that I just never spent the time to get into it. Unfortunately because of that I stayed away from the mp in Gears 2 as well. When I got a hold of the beta the first thing I noticed right away was the respawn pool. I really think that’s what I needed to get past the frustration of instantly dying almost every time I ran into an opponent. I felt sorry for the rest of my team, but this is what I needed to get the ball rolling. That mixed with the unlockable weapon mods, characters, and leveling system we were off to an addicting start. The new weapons are great. I love the retro lancer. I seem to be better with the bayonette than I ever was with the chainsaw. And the new sawed-off shotty? I don’t know why people are hating on it because its my favorite new weapon. Sure the reload time is slow, but I only need one shot to reconstruct your face. Being able to stun someone by jumping into them over a barricade is also an excellent addition. There’s nothing more satisfying that kicking someone down and then blasting them into 100 pieces. I’ve spent enough time in the beta that Gears is definitely going to be one of my main go-to multiplayer games from now on. I’m definitely a fan now.

Now I’ll admit I am a Gears fan boy, but it does have its flaws. I too have been a serious victim of spawn camping which is extremely frustrating. I’m not sure if that’s just a flaw in the level design, or the spawning engine, but I’m hoping that something gets tweaked to give you a little more of a fair chance to get going once you’re dropped in the map. It also still seems like it’s just a battle of who’s better with the shotty. I know they’re working hard on balancing the weapons, but people are still definitely favoring getting up close and personal for that one shot kill. I could also do without the morters on a King of the Hill map. Call me crazy but that just feels like a cheap way to win the circle back.

To sum it up there are definitely way more positives than negatives in the beta. They did what they needed to do to hook me into the multiplayer side of the game so to that I say nice work. I’m looking forward to introducing all of you to my boomstick in September. 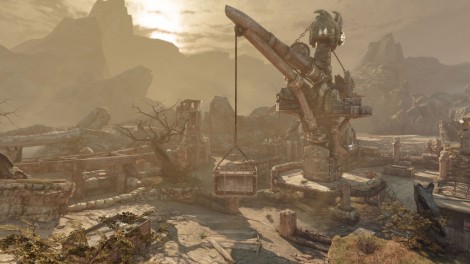 Watch out for dust storms.

There are plenty of finished games out there with functional multiplayer experiences, but they could still learn from Gears of War 3‘s beta build. There are definitely things that let you know that it’s a beta – most specifically: spawn camping/bottleneck opportunities that a really well polished map doesn’t have, but unless you run the beta test (and get the activity “thermal” map to see what’s happening), you don’t know that. With the obvious “this is a beta build” disclaimer out of the way: the controls are super-smooth and the addition of the ability to hurdle over cover and trample an opponent hiding behind it adds even more excitement. Although the Gears of War games have been on the “slow” end of action/shooter in terms of player movement & shooting, I almost got the sense it was slowed down even further, but that might be nothing other than perception.

The graphic presentation is standard Gears fare, which is to say: gritty, grainy, very well done but eschewing things like bright colors other than red-for-blood as too sissified and not worthy of inclusion in the palette. Weapons have been tweaked carefully. The powerful-but-inaccurate Retro Lancer makes watching your back even more vital, since letting your attention wander can end you up with a bayonet impaled in your kidney; the Gorgon pistol is now a fully-automatic submachine gun (which gives it significantly more utility than it had in Gears of War 2); the iron-sight zoom in on the Hammerburst (a la Battlefield 2’s Springfield 1903) make it a poor-man’s sniper rifle. My favorite, though, is the rich man’s sniper rifle, the One Shot. It’s mounted and takes a second to warm up, but once it does, woe to those who don’t find cover or pay attention to the pale white, translucent target laser and gentle pinging of the One Shot being targeted because, true to its name, one shot and…applesauce, bitch!

We’ll see how the expanded leveling & “prestige” items work into the game – I don’t get the feeling that they’re going to do anything than let you unlock different characters and skins for your weapons (i.e., it’s not going to give you any upgrades that have an effect on game play), which is good news for me: the thought of new entrants into the mp arena being at a handicap because old-hands have better weapons…not a good idea in my mind. I’ve thoroughly enjoyed all of the modes I’ve played – Capture the Leader is a lot more fun now that you don’t have to drag him back to a certain spot and Torque Bow Tag (all spawned weapons are Torque Bows) is almost as much fun to watch as it is to play. Some reptile part of my brain revels in watching people suddenly reduced to viscera. But then…that’s probably obvious, since I love Gears.

The Gears of War 3 multiplayer beta features a lot of great new features. First off there is a ton of stat tracking. I am a sucker for statistics. When you can give me in black and white how much I suck, I’ll eat it up. There are also awards given out at the end of each match in the form of ribbons. The ribbons range from being the last one alive on your team to being killed the most on your team. I like to be rewarded at the end of a match no matter how good or bad I perform. It gives a nice sense of fulfillment. Weapons also got some nice additions. You can now skin your weapons with different camos. You can give your Lancer an urban look, or you can have it on fire. I prefer fire. The addition of the Retro Lancer has me very excited for what weapon options we might have in the retail multiplayer. I do love that you can spear people with the bayonette on the Retro Lancer. It is one of the most satisfying kills I have performed in the beta so far. I also like the Gears take on Team Deathmatch. I love that there are a limited number of respawns. Once that number is gone each member of the team has one life left. When your dead, your dead. The team that eliminates the other wins the round and you play best of three. It’s a fresh look at the TDM concept. 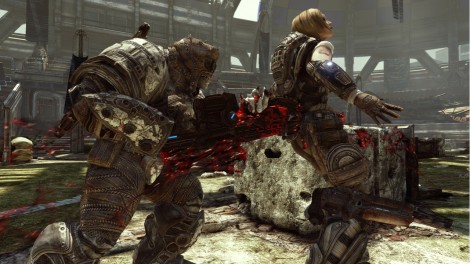 Of course with the good comes the bad. First of the sawed-off shotgun just plain sucks. You damn near have to be holding hands with your enemy before you are in range. You just need to make sure you don’t miss. The reload time is so long that I think I could have a pizza delivered before the sawed-off is reloaded. The maps are for the most part very good, but damn is it easy to get spawn trapped. If you get pinned down on the mine map you might as well just call it a day. It is one of the toughest holes to dig out of once your pinned down of all the maps. I am not sure if the spawns ever switch, but they should. It’s very frustrating to get pinned down with no way out.

I’m really looking forward to the release of Gears 3 this fall. I also expect the Horrible Night crew to play all the way through Horde Mode.

I never know how much I’m going to participate in a multiplayer beta, especially for a game that I know I’m going to buy down the road. I want the game to feel new when I own it and I don’t want to have my skills rust up in the mean time. So I thought I’d just play 3-4 rounds of Gears of War 3 and be done with it. Instead I found myself drawn back to the game multiple times a week. Most of that due to the fact that I love the pacing of Gears multiplayer, but the hooks to 3 were already digging into me in beta form. With every seemingly small stat being tracked, the game encourages you to play with different weapon loadouts and try different tactics. Although the stats, medals, etc exist in other games, they are a welcome addition to Gears. Gameplay aside my favorite part of the beta became the rollout of new game modes. After Team Deathmatch won me over with it’s spawn pool point system, I found myself getting into modes I don’t normally try, like King of the Hill. KotH quickly became my favorite because it requires enemies to get in close to capture an area allowing for brutal shotgun battles and plenty of chainsaw duels.

I can’t say there was anything that blew me away about the Gears 3 Beta, it’s all about refinements and tweaks by the 3rd game in the series. As Epic has said, stability will be a key element in the success of multiplayer for this game for it to hold onto it’s audience. The gameplay and carrots are in place though, and I didn’t run into any performance or connection issues during my time with the beta. My one suggestion is that I’d like to see a few more chaotic modes, the only knock that holds any weight against this series is that the multiplayer is a bit slower paced than other games. It’s something I actually love about Gears, but variety is the only missing piece if you just had to pick something. Otherwise, Gears fans are set to have the best version of their favorite multiplayer game.