I know this video found itself all over the internets last week, but now is the time for it to show up on Horrible Night. Brought to you by the same group of dudes who did the awesome Call of Duty movies as well as a funny Portal gag, Real-Life Super Mario Kart is another gem in their burgeoning collection of video game related movies.

I haven’t been go-karting in a long time, because really what’s the point after you get a driver’s license? 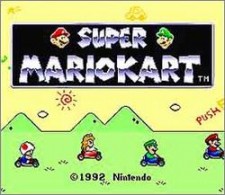 However, I would get back behind the wheel if I could shoot turtle shells or drop a banana peel much to the chagrin of my opponents.

Hell, if the turtle shells weren’t possible, I’d be happy with the mushroom boost. Just as long as I don’t go off road and have to deal with that stupid Lakitu.