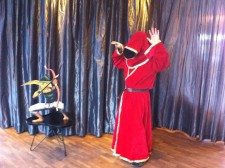 I can’t think of a better way to advertise for the quirky downloadable dungeon crawler, Magicka, than a ridiculous infomercial. It actually gives you a good glimpse as to the sense of humor that carries throughout the game and helps separate it from its hack/slash/magic brethren. I promise you though, the magic(k?) effects in the game are much more graphically impressive than the in studio effects. I’ll leave it up to you to judge if that is a good thing or not.

Magicka is currently available on the PC and via Steam where it has been selling much better than expected despite it’s buggy launch. The publisher, Paradox Interactive, has also recently announced that both free and paid DLC will be coming to the game in the near future.