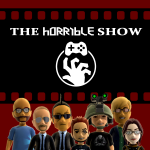 It has been a while since we got caught up on the games we have actually been playing. Justin, Cole, Ethan, and Justin relive their recent experiences with Red Dead Redemption, Assassin’s Creeds, Dead Space 2, War/Mine Crafting, plus a few others. Send in your questions to simon@horriblenight.com or @TheHorribleShow

After a few months of news, editorializing, and previewing/reviewing the year, it is about time that we just kicked back and talk about the games we are playing. You know, since it is pretty much why we gathered on this site to begin with. The Threesomes kick off this week with Cole waking up to Weird things in Indiana. GiffTor asks the On the Spot question and wants to know if any movies out there deserve a good game so Ethan schools us the incredible American Ninja. Taking a look at our games of the month, and you can’t describe many of them as small games. We’ve talked through some of these games before, but it’s nice to see the rest of the crew wrap up great titles like Red Dead Redemption and Mass Effect 2, while Justin finally spills his guts on Dead Space 2. Be on the look out for news about our upcoming online gaming nights – Horrible All Nighters – coming to a multiplayer game around you soon. Rev up those chainsaws because we are coming for ya.