Trying to recall all of the games my younger brother and I had for the Sega Genesis is like trying to recall how to solve that chemical mixture problem from freshman algebra that drove me up the wall without using Google, but if I tried, I’d have no trouble remembering Desert Strike.  I don’t know how many hours I plowed into that game and how many times I cursed not having more AGM-114 Hellfire missiles, but flying around the desert in an Boeing AH-64 Apache Attack Helicopter and blowing up tanks, fuel bowsers and grounded planes seems to be indelibly imprinted in my brain.

Depth in an early shooter? 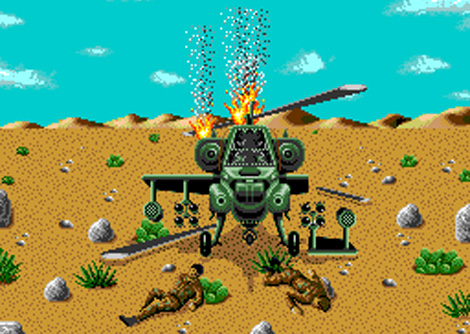 There could be serious consequences

If the Rockstar guys haven’t hoisted a beer to Mike Posehn, the game’s designer, they need to.  Maybe it was because he had no previous game design experience, but Desert Strike was a stark departure from strictly linear games common at the time and if you were to try and describe it with modern categories, you’d doubtlessly use words like “open world” and “sandbox.”  Although Desert Strike was split into “levels,” it gave you a surprising amount of freedom to plan your path to completing your objectives while adding in some realistic limitations like fuel consumption and limited ammunition capacity.

I see your "Danger Zone" and raise you a face full of Hellfire missiles.

On top of weapons and fuel management, Desert Strike added another layer of strategy to the gameplay in the selection of your copilot.  Copilots had different ratings for gunnery and winch operation; winch operation being critical since that was the mechanism that allowed you to rescue POW’s and downed pilots and to pick up ammo crates and fuel barrels to reload and refuel.

Rescuing POW’s wasn’t always required, but it did provide the bonuses of repairing your armor and occasionally resulted in finding a new copilot with higher skill levels.

This copilot's gunnery skills make you think he's in a wheelchair.

Beyond the meat-and-potato gameplay, Desert Strike designer Posehn was a PhD Mechanical Engineer who obsessed on game controls and camera movement – something that game designers like those over at Disney’s Epic Mickey studio might be well served to learn from considering the criticism their game has received regarding camera movement.  It might seem to be a strange thing to remember, but the inclusion of inertia that carried the ‘chopper in the direction you had been traveling and a camera that follows the Apache’s movement as it turns along an elliptic curve to show as much of the surrounding area as possible have stuck with me as novel for the time and an attention to a detail that sometimes seems to get lost in modern games’ design.  Whether it’s coming up with launch day DLC or edging uncomfortably close to the uncanny valley, it’s often the “simple” things that make games memorable like Desert Strike.