The blob has been a classically misunderstood entity since its introduction in 1950’s low budget cinema. Whether acting as a low level enemy in RPGs or the side kick of a curious young boy, the blob fares just as poorly in gaming. Obviously feeling the plight of the blob a significant cause, the brains behind Drink Box Studios have finally opened up a starring role for the gelatinous journeyman in their latest PSN game Tales from Space: About a Blob.

The title does a great job of outlining the basic premise of the game, so further pointing out that you play as a blob from outer space seems redundant. Knocked out of the sky by a mad scientist’s rocket, you’re separated from your blob buddies and locked away in a secret lab. Your goal is to navigate a variety of locales in order to locate the rest of your friends while also plotting revenge against the humans that work so hard to persecute your kind. 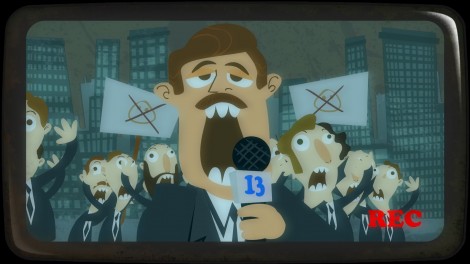 Apparently the disdain for blobs is universal

Controlling your blob is pretty simple in the beginning as you’re limited to jumping, “sprinting” (not sure what the term is based on blob biology) and absorbing objects in your vicinity. These objects allow you to grow in size, replenish your health and can also be spit at enemies and breakable objects. Along the way, you’ll gain the ability to smash objects with your body, create magnetic fields and absorb electricity, all means of solving the many puzzles that stand between you and freedom. The complexity in the game comes from actively switching between these powers in order to overcome certain obstacles and enemies.

The growth mechanic is the most intriguing part of the game and your main motivation for consuming everything around you. As you grow, you’re able to absorb larger objects and eventually pass through certain checkpoints throughout the levels. In the beginning, your blob is just a couple centimeters in size, but after a while the buffet that is the world around you will fuel growth to epic proportions. The levels scale as you grow, which makes for a seamless experience and a cool twist on the back tracking mechanic found in a lot of games. 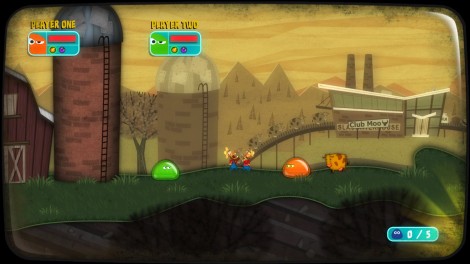 Quite the compromising position

The art style is similar to that found in cartoons like Dexter’s Laboratory and the Fairly Odd Parents and fits well with the 60’s science fiction theme. The blob itself is a bit more detailed and stands out well from the simplified movements and design of the objects and enemies in the game. This helps to keep your focus on your character, especially as things around you get a bit crazy. I especially liked how the objects that I recently absorbed floated around in my semi transparent body as well as the blob’s eyes moving in the direction I was aiming my spit or traversing the environment. Little touches like that really show the care Drink Box Studios took in creating an enjoyable experience.

The environments are well designed and never feel repetitive, which helps the pacing and impact of moving on to a new level. From laboratories and schools, to farms and power plants there’s always something new to see. The variety in puzzles and obstacles is refreshing and the application of the above mentioned powers is never forced. The other great thing about the levels is how puzzles and platforming is interspersed with food rampages that see your blob taking out its frustrations on the enemies that a few growth cycles before were so intimidating. The last couple levels are especially satisfying, which helps the game end on a high note. 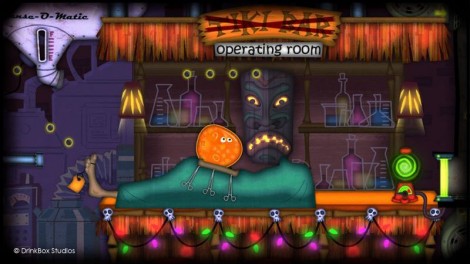 The game is a bit short, but the replay value is there with the inclusion of leader boards and collectibles such as time dots and hidden blobs throughout the levels. The levels themselves are timed, giving a player further incentive to play over and over again in hopes of bettering their last run. While not as abusive as Super Meat Boy, the game is challenging and and majority of your time will be spent on trial and error and replaying sections after death. Checkpoints are well placed and you have an infinite amount of lives, so death isn’t as painful as it is in other games. The inclusion of a cooperative two player mode helps further increase the allure of the title and makes for a much different experience. 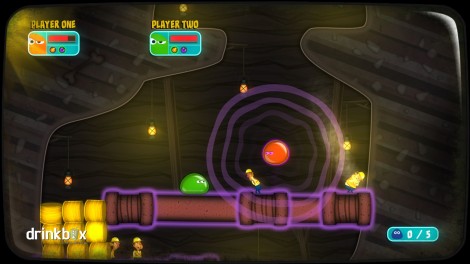 Two is always better than one

None of that matters if the game isn’t fun and I am happy to report that it most definitely is. The developers put effort into utilizing appealing old school mechanics with some new school ideas and it makes for an awesome package. At $14.99, the price point is appropriate and fans of puzzle platformers should absolutely add this to their PSN library.

Tales From Space: About a BloG
Drink Box Studios