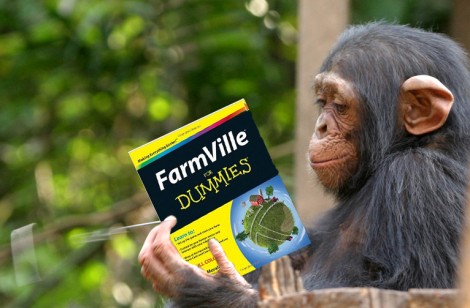 Are you sure they didn't evolve from us?

Despite the current predicament in Egypt, political tension with China and our own country’s economic strife, people are still really into FarmVille and quite concerned about the mysteries surrounding that “game”. Even though the “game” appears to be quite simple (even verging on patronizing) a Farmville For Dummies will be released on February 22 of this year, a book co-written by Kyle Orland, someone who actually plays and writes about real video games.

In the book, you’ll find improved ways of annoying your friends on social networking sites and not fully understanding the difference between your FarmVille farm and real life farm operations. If farmers complain about anything, its the back seat farming advice they get from FarmVille players.

I’m not one for guide books or FarmVille, so I’m probably not the best source to report such a story. Nonetheless, if you find yourself in need of this particular guide please distance yourself from further contributions to the gene pool. Instead, pick up For Dummies guides in reference to maintaining a job, having healthy relationships or in the least building model ships inside bottles.