There’s no hope of going outside this week with the icepocalypse upon us so we ask The Cursed: What are your requirements for a gaming marathon? This week we are joined by JDevL, Colefacekilla, Wizardtrain187, GiffTor, Coopopolopolis, streetalchemist, and EndlessBen. 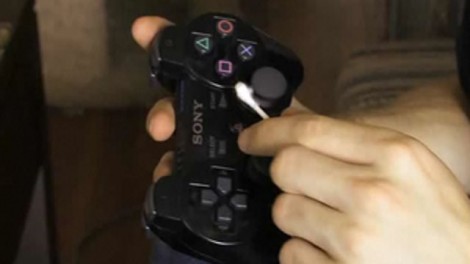 I don’t really have needs or crutches anymore. I used to always have a can of soda nearby as I played, but since I quit drinking soda, that need stopped as well. I try to stay away from snack foods as well, not because I’ll gorge on them and be ultimately unhealthy, I don’t like the residue or powder left behind on my fingers. Because of what’s left behind, I’m constantly having to wipe my hands on a napkin (being more realistic, a clothing item) before touching the controller again. I don’t like my controllers getting gunked up.

Though I can play in any environment, my ideal is dark, quiet, and alone. I want to be immersed in the story as much as I can and those three things I listed above are absolute requirements in order to have the most fulfilling experience.

It cracks me up that your reasoning for not snacking during gaming isn’t because you want to be healthy, but rather to keep your controllers clean. I can relate though. If I snack during gaming my jeans definitely have to go through the wash. For me, I don’t really get the chance much anymore for marathon gaming, but when I do I really just need to be comfortable and have plenty of beverages on hand. I like the room to be darker, with the surround sound turned up.

I think really my only requirement to get settled in for a gaming marathon these days is making sure my wife will keep our cat entertained while I play. See, our cat is the neediest cat that has EVER existed. And I’m the one she plays with of course, never gives anyone trouble until I get home and want to actually do something. She has a tendency of following me wherever I go, ESPECIALLY if it’s me going to the basement to play games. Down there she has a tendency of freaking out if I play for too long. She then proceeds to punish me by alternately chewing on the rockband drum kit usb cord, jumping in front of the tv to get my attention, knocking stuff off of the table at the top of the basement stairs until i pause the game and walk to the bottom of the stairs, and rub up against my vertical 360 like she’s going to try and knock it over…

Otherwise I actually tend to have lights on and the volume up. I’m pretty easy really… damn cat. 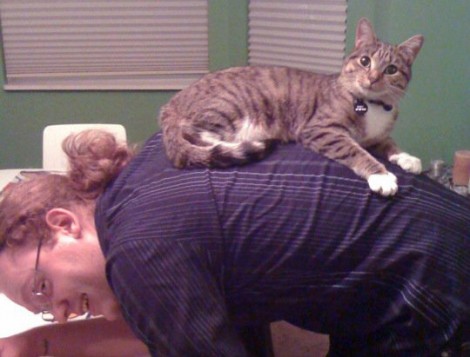 That's not where a cat goes

As if I needed another reason to loathe cats. I always thought dogs would be more of a hassle or a threat to my cables.

I have some sort of oral fixation while gaming. I have to have plenty of drinks and snacks at my disposal. I’ve gotten better at avoiding energy drinks, etc, but it’s hard to find food that is somewhat healthy. I usually go with pretzels or saltine crackers. For whatever reason though, I cannot get drunk while gaming. I get too distracted by one or the other and either end up stopping the game or forgetting to refill my drink “properly.”

I prefer coffee followed by water followed by beer for marathon gaming sessions (morning – until noon – afternoon/evening). Beer and some sort of easily consumed food that doesn’t require me to touch it and thereby gunk up my controllers. Ziti or ice-cream are favorites. Other than that, I do turn the lights off and the sound up and make sure that I have a healthy stock of rawhide chews for my dog, The Spenser. I have no qualms about bribing him for quiet with healthy, nutritious cow hide. He’s surprisingly willing to let me play all day as long as I take him out in the morning, once in the afternoon and once after he eats, which tends to be convenient since those are good times for me to take care of business, too.

Yeah I was always the same, still am most of the time. I prefer to be eating or drinking or both if I’m going to be playing for a long time. Right when I got my Wii, I had a VERY long marathon session in the CGT lounge at Purdue of Twilight Princess accompanied by PLENTY of bottles of Vault, snickers bars from the vending machine and Love Shack calzones… after about 12-15 blurry hours of gaming like that during finals week I was the sickest I’d been in years for two days straight… That’s the last huge gaming marathon I remember. 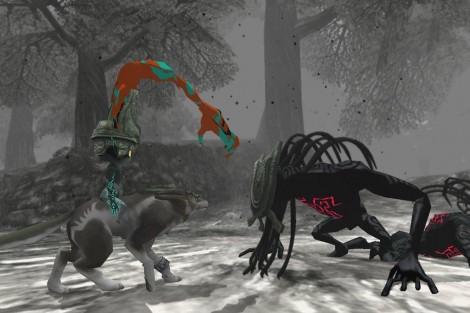 No amount of energy drinks could get me through this Zelda game.

I lived off of Bawls and pizza for a week straight at one point. I was either working all nighters or “recovering” by playing games all night inbetween. Then, I was sick as a dog for the next two weeks and baffled at the cause. It was then I realized I no longer had that hummingbird metabolism I had back in high school.

Gaming marathons work best when I’m off work and my wife isn’t. She actually went to Canada on business in November and that was probably the last time I had a solid gaming marathon. I also need it to be an overcast day, sunlight makes me feel guilty for being indoors too long. The marathon is always preempted with actual excercise, usually weights or 4 miles on the treadmill. Once all of that is complete, I grab a jug of water, a cup of green tea with lemon and sit down. I totally agree with not having snacks as mentioned by Cole. Assuming a marathon is 4 hours plus, the grubbiness of one’s hands is something to take into consideration. However, I do eat almonds at intervals throughout the marathon session that coincide with my usual eating schedule. These are only specifications of a preplanned event as gaming marathons due to illness or injury aren’t quite as constrained.

During the dark days of WoW, every day on my way home from work I’d call home to the roommate to see if we were getting pizza or Chick Fil-A, and double check on the status of our 24 pack of Pepsi. It didn’t seem so bad since two of us were playing in the same room. However, it’s no coincidence that I stopped playing pretty soon after I got my own place. WoW guilt is a lot more soul crushing when you go solo. To this day, I still associated evening runs to Chick Fil-A with that game. 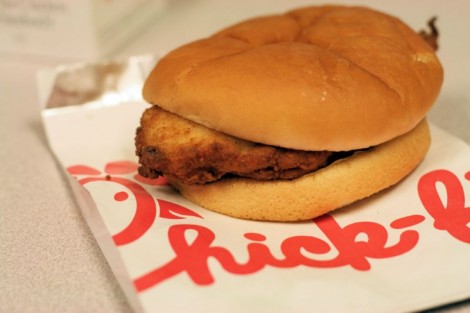 No no no, MY pleasure

If we’re going to go back to the dark days I had a pretty unhealthy Counter-Strike diet. It consisted of skipping meals for whatever was close to my desk and Mt. Dew. Or if I did make something it was whatever was the quickest and fastest to eat. If I wanted to go all out, the 99 cent Totinos pizzas were my friend.

Ah, I remember back in college where my roommate and I would wake up on Saturday and stumble to our computers, start playing Diablo II, take a break at some point to eat, then go to bed, only to repeat the process on Sunday. Those were truly the halcyon days.

Most of my gaming marathons these days tend to be accidental, as in “holy crap, when did it become 6am?!” which doesn’t really leave room for a lot of consistent preparations. Back in the day, it used to be several cans of Mt Dew, though it was not health but a permanently sticky N64 controller that got me to ease up on that. Beyond that, I really don’t need much these days, just a chunk of free time and a bit of my usual insomnia and I am good to go for a nice long marathon, whether I’m convincing myself that I meant to do it or not. 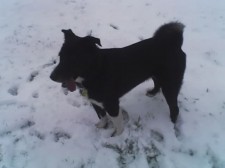 Another reason I tolerate waking up early to work out is that if I want to have a marathon gaming session, I can feel free to be a lazy piece of crap the rest of the day. Sunlight is a bonus for me for one reason: I can open the patio door and The Spenser (my dog) can entertain himself outside rather than getting suddenly interested when he hears a dog bark on the game I’m playing, hopping up on the couch, and licking my ear/cheek/neck. He is a large dog and it is distracting.

I can’t game in the morning, my brain doesn’t function in the same way. I almost exclusively require darkness and loud surround sound speakers or awesome headphones. Smaller TVs and 2.1 systems need not apply. Of course this is just so I can get as lost in the game as possible, which if you are going to spend consecutive hours playing a game, you may as well go all out.

All this pet talk has really pushed me to avoid them altogether. I do, however, recommend having a curious dog around at least once during Dance Central sessions. They can make for some hilarious silohouettes and confuse the hell out of the sensor when it tries to figure out what to do with those extra appendages.

A baby/toddler can wreck havoc on the Kinect as well, but we were more interested in seeing if the Kinect could recognize them after they walked in front of us. Luckily no babies or toddlers were hurt by my flailing dance moves.

In my current setup, with my TV in the same room my wife and I sleep in, I try to game whenever I can. And that is usually when she’s asleep. She stays up late and sleeps in, so morning is the best time for me to get uninterrupted game time. Seeing how I’ve always been someone who can’t sleep in, morning gaming is just fine with me. I tend to fall asleep during loading screens during late night gaming sessions and have been known to fall asleep while actively controlling a character.

If by dark days you mean shitty weather dropping 2 inches of ice and shutting down the city, yeah. Despite calls for an invasion of Frost Giants and Ragnarok, my power is still on, but my internet is down at home and AT&T is taking their sweet-assed time about repairing it. They said the roads were bad. I told them, “Um, I’m at work. What’s your excuse?” (I actually didn’t say that because although I’m not always a big fan of the SERVICE, their customer service really is pretty good for UVerse and on top of that, we’re one of the only offices open in the entire Indy-Metro area).

I can say one thing, this past week’s ice storm is totally validating a lot of gaming. 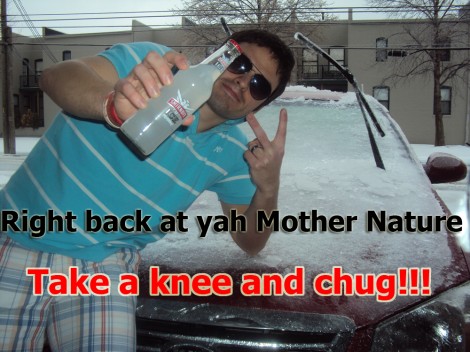 The original marathon gamer inside all of us would not recognize the gamers we have become. Jugs of water over cases of energy drinks? Keeping the controller clean? Cats in the way? We have become a lot more tolerant style of gamer over the years, but for god’s sake turn out the damn lights, we are trying to play a game here!

3 Comments → REPLY TO ALL: Marathon Requirements