I had the opportunity to check out the beta for Dawn of War II: Retribution this past week and let me say right now that I’m super excited, almost to “pee my pants level” but not quite “poop my pants” level (that tends to happen out of fear). For those not in the know,the  Dawn of War 2 series has taken the strategy component of real time strategy and emphasized it, thus making micromanagement of smaller squads more important than massing huge armies. With the addition of RPG like elements and hero units, its the type of game that may interest people who aren’t necessarily fans of the RTS genre. 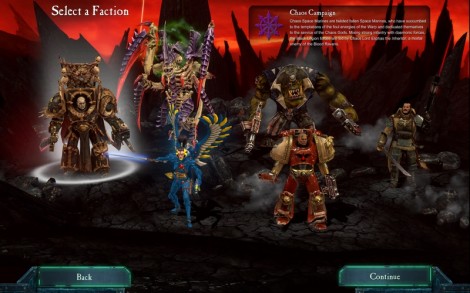 Someone didn't get the memo about over the top equipment

While the single player campaigns were not available in the beta, I did have the ability to check out the newest race, the Imperial Guard. Imperial Guard troops stand out a bit from the rest of the factions simply because the majority of their soldiers are regular old humans with neither alien blood coursing through their veins, technological enhancement or demon infusion to add that extra layer of pop that’s a prerequisite for survival in the Warhammer 40k universe. Don’t mistake that for weakness, however as the Imperial Guard can stand their ground quite well amongst the mutants and monsters infesting the battlefields.

The first difference you’ll notice when playing as the guard is the number of troops their first tier squads. Similar to the Orks and Tryanids, the Imperial Guard utilize massive waves of soldiers as their first line of offense or defense, so losing a couple soldiers here and there is not as much of a loss as losing a space marine squad. They are definitely lacking in terms of their melee expertise, but with the ability to lay down barriers for cover and set up laser turrets, the playing field stays relatively level. They also do much better when it comes to defending territory early on, so enemy rushes don’t hurt quite as badly. 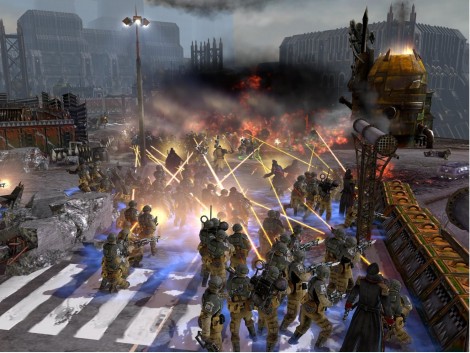 There's a battle somewhere amongst that smoke and mass of bodies

Another tier 1 unit worth mentioning are the Catachan Devils, shot gun toting squads of early 80’s action movie stereotypes with a penchant for wearing cut off shirts and eating nails for breakfast. They’re great at dispersing baddies and having a squad on stand by helps back up the weaker guard units.

In tier 2 you get access to Stormtrooper Squads, highly trained and customizable soldiers that resemble the Helghast from the Killzone series. If the Catachan Devils are the Marines of the Imperial Guard, these guys are Delta Force. Tier 2 also introduces the comical yet tough Ogryn, large ogre looking guys with poor aim but powerful and disrupting melee attacks. These guys are great at keeping the other race’s melee units at bay while the rest of the troopers line up their shots.

The highlight of using the Imperial Guard will definitely be the number of mechanized vehicles they have access to, 5 in total. Soft flesh is hard to shred while its safely behind a couple tons of steal, and as you upgrade your base to the second and third tier, things really start to get interesting. There are a variety of options to choose from, from a fast attack bipedal mech at tier 1, a troop transport and artillery at tier 2, and finally the Lehman Russ battle tank and its steroid enhanced life partner the Baneblade as the show stopper for the race. Imagine what a child’s portrayal of a tank is and take away the smiley face sun and you have the Baneblade, a building sized vehicle with a dozen guns and extreme resiliency. 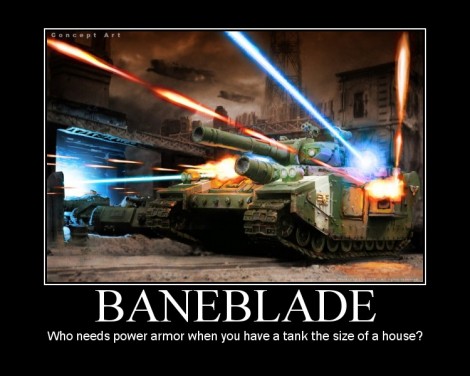 Really doesn't need much of a caption does it?

Up until this point the races included in Dawn of War II have complemented each other very well, and the Imperial Guard will definitely continue this trend. Defensively minded players will be attracted to this race, but the unit variation and customization of the Imperial Guard still leave room for on the fly strategy alterations as well as offense enthusiasts. Add in the inclusion of 6 single player campaigns upon the game’s release in March and I feel confident in saying that Dawn of War II: Retribution is here to hamper your progress in all other titles for quite some time.