Building off a lot of our recent addiction talk I bring you this week’s topic: What game(s) will you admit that you spent too much time with? This week we are joined by JDevL, Colefacekilla, Wizardtrain187, GiffTor, Coopopolopolis, and streetalchemist. 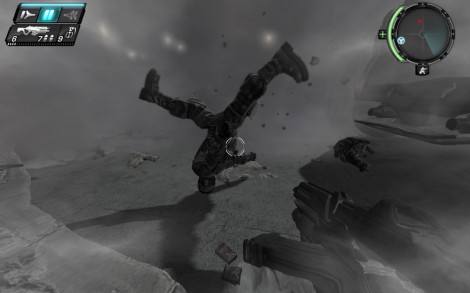 Well I think by now everyone knows that I’m a sucker for any fps game with a boomstick or rocket launcher. I have a handful of embarrassing games in my library that i probably shouldn’t own but do, and the ones that I haven’t finished completely I probably still will. We’ll start with TimeShift. That game is horrible, the graphics are horrible, the AI is horrible, the story is horrible, the controls are horrible, yet I played the entire game… even on the hardest difficulty. It belongs in my “I’d sell it if it were worth more than $1” group.

I probably spend way more time on iPhone games that aren’t good. My wife got mad at me for playing the early Tetris clone Tris, that eventually got taken off of the app store. I played it while we watched TV, while she drove, and other places I probably shouldn’t mention. I’ve also spent way, way, way to much time on a Solitaire game. Even though I have good games like Angry Birds, I keep going back to these games more than I probably should.

In terms of console games, I try not to buy any games that are bad (or anything I think is bad). I just don’t have the money to waste on “bad games.” While this is true now, I used to play a lot of horrible games in the NES, SuperNES, PSX era. Games like Bubsy, Gex, and Karnov were multiple plays and rents. Hopefully I’ve gotten over my “bad” game playing, at least until I have more disposable income!

Hooboy.  Um. Cyborg Justice for Sega Genesis got WAY too much play time from both my brother and me in junior high. (Grammar-hawks: it is “me,” not “I.”) Mercenaries 2: World In Flames got a lot of attention, too, even though it seemed like absolutely no work had been done since its predecessor… I just have a thing for random destruction and using a helicopter to carry an LP tank and drop it on an unsuspecting roadblock checkpoint.  Star Trek: Legacy probably got too much attention, too because I keep wanting a Star Trek game to work, but except for D-A-C, none of them have been very fun (going back to Star Trek, which was also released for the Commodore 64 and was effectively unplayable).  I’m sure there have been others, but those are what come to mind.

Alright, so as far as games I’ve spent too much time with, I’m going to put Final Fantasy XIII on that list. The gameplay isn’t the best, and the game is really linear compared to the previous installments. But I’ll say right now that I’ll still go back to that game eventually and try and beat it just because I’m a sucker for a storyline.

I totally forgot about FFXIII, maybe I just dismissed it from my mind altogether. I spent 25+ hours on that game and just gave up because it was a pretty terrible game. I’m still angry at myself for going to the midnight launch at GameStop for that game. 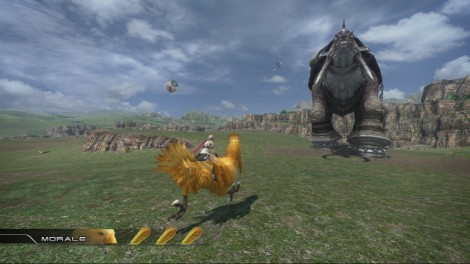 That chocobo can't run away fast enough from this disaster

I have a confession to make that may rule me out from referring to myself as a “gamer” in the future: I have never played a FF game. I did watch a fraternity brother play FFVII and FFVIII in college quite a bit and JDevL’s neighbor back in our hometown play the one where you used a Chocobo in some minigame to find…treasure? Whatever.

I love the FF XIII hate, I don’t know why. I never had an interest in the game and honestly I’ve been tired of FF since they tried to get me to race chocobos in VII.

Outside of the FF world and back to an experience that Coop and I shared, is the greatest/worst game of all-time: 50 Cent: Blood on the Sand. Had we known how long the game was, I think we would have second guessed our original playthrough. The end definitely drags on, and the story is so incoherent that you have no idea when it will end, and then, it’s just over. So bizarre. But also, so fantastic that we seriously debated playing through it again to get the other side of the co-op achievements.

I’ve been tired of FF ever since FF1. I still don’t get those games. However, I would totally play through 50 Cent: BOTS again just for achievements. It satisfies both the shooter and achievement whore sides of myself. I definitely support JDevL that it is the greatest/worst game of all-time. Best Buy even backs that statement as it is one of the most valuable games in my library (at a whopping $7) for trade-in that isn’t a more recent release. 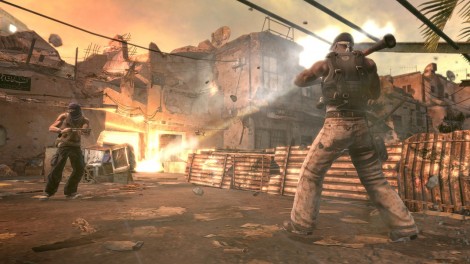 I knew when Justin came up with this topic, that Blood on the Sand would be mentioned by him and Coop. Is that the best/worst game that has come out on the current generation? Can any game possible compete with it, that wouldn’t be a direct sequel to BOTS?

The other game that jumped out to me was the hugely disappointing, Scrap Metal. A XBLA game that should have been RC Pro AM + Twisted Metal. Instead it was this grind of a racing game with broken battle mechanics, and all it did was make me wish for a Rock ‘n Roll Racing sequel.

Would it be worth mentioning the every-single-year sports franchises? I don’t have anything super specific, but I know that I spent a LOT of time playing a couple of the Madden iterations that had all kinds of problems that are only marginally improved (e.g., mainly shit running games, vacuum AI-catches/wide-open receiver drops, Michael Vick…) Thoughts?

Haha, you have a good point. With most yearly games, even outside of sports, I tend to take the every other year approach so the sting of no improvements isn’t so sharp. The exception so far being the Assassin’s Creed series, I still don’t know how they pulled Brotherhood together.

You know, even though I have praised the game, Crackdown, was a huge waste of my time. It was enjoyable enough here and there, but really all I was ever doing was grinding for achievement points, that I eventually gave up on in the end. I bought the game solely for the Halo 3 beta, but I still bought it at full price and the Crackdown series is a top-tier downloadable game at best. 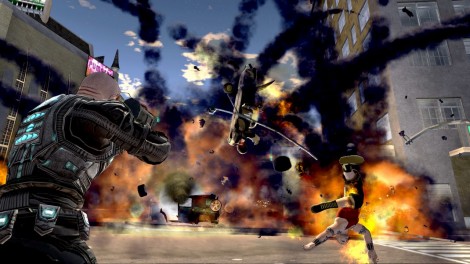 Days of my life spent doing only this

Ha! “…[it’s] a top-tier downloadable game at best” – That’s a new critical term for me but I kind of like it in the “damning something with faint praise” kind of way, although it could be a slap to the great downloadables that were made for that format, too? [shrug].

Ya, I thought the same thing. I don’t mean to insult my favorite downloadable games as most are better than this. Let’s just say that Crackdown should have never been priced over $30.

So what is it called from this side?

Whoa, you guys jumped all over this one, sorry I’m late to the party. I totally agree in reference to the CoD games. I almost feel like I play them for so long because I think I’ll be competitive someday, while at the same time thinking to myself ” This isn’t very fun…and I suck”. The single player campaigns are totally worth it though…I love explosions.

I think that Hellgate: London was the best example for me. I love monsters and shooting monsters and monster explosions, but it was a pretty broken game. That being said, I stuck with it. Now here’s the kicker…I played the single player mode. So all the issues of a crappy MMO without the benefits of a community. I think I stuck with it because there weren’t many games like it at the time and the idea of Hell overtaking the Earth is the plotline of every story/ comic I have ever tried to write.

I almost called you out because we told ourselves we weren’t going to mention MMO’s, but the fact you endured Hellgate: London completely solo, just made me feel sorry for you. Having tried the beta of that half-realized game, it was the epitome of a time waster waiting to happen. A unique setting with repetitive, but playable, gameplay. Just because you can’t get it anywhere else doesn’t mean that it is good.

You can’t get those hours back, people. Keep trying to convince yourself it was a good game, it wasn’t. You made a bad choice, but it’s ok, you are in good company. We’ve all wasted our time making the same explosion happen, hoping the game gets better when it never does, or buying the same game every year. We may never learn, but at least we are prepared for when we all end up in hell.

8 Comments → REPLY TO ALL: Put It Down Already