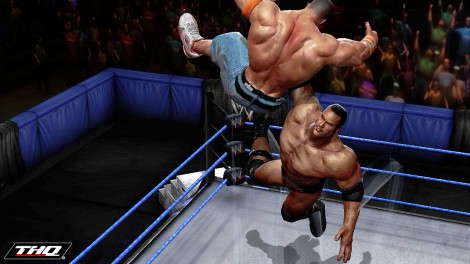 That's the biggest Rock Bottom I have ever seen!

Pro wrestling is an athletic, over the top form of sports entertainment that doesn’t need much in the way of embellishment when it comes to transferring that action to video game form. WWE All-Stars is looking to change that when it is released on March 29. Developed and published by THQ, All-Stars takes your favorite wrestlers from the 80’s and 90’s and squares them off against the superstars of today. You might be asking yourself “Why should I be interested in a wrestling game, when I haven’t been keeping up with the yearly Smackdown vs. Raw releases?” Because Andre the Giant, Bret “The Hitman” Hart,  The Macho Man Randy Savage and the Rock are in the game, that’s why. The only person that should be included but probably won’t be (due to his involvement in rival promotion TNA Wrestling) is Hulk Hogan. It’s not a big loss, he only had three moves anyway.

It can still be argued that the greatest wrestling game ever created was the one that sat in my local Marsh grocery store for years. WWF Wrestlefest allowed fans of the WWF to control their favorite characters in one-on-one or tag team battles. It was an arcade game through and through and WWE All-Stars looks to bring that form of wrestling game back to the market.

While I haven’t played the game yet, this is the most excited I’ve been for a wrestling game since THQ first licensed the WWE on the Nintendo 64. I was heavily invested into wrestling at the time, so that is understandable. While I tend to commit drive-bys on what’s going on in the wrestling world today, that doesn’t hamper my enthusiasm for this game. It has been a long time coming for an arcade style wrestling game.

Bringin' it back to the old school...

The genre has been trying to get on a reality based playing field ever since the technology has allowed them to attempt it. And I’m not sure that’s the way to go when it comes to recreating the wrestling experience. We all know that wrestling is a work, the outcomes are predetermined. The question is, how do you translate that aspect of the business accurately in video game form. You can’t, and THQ has gone on record stating that they treat the Smackdown vs. Raw as a fighting game and nothing more. They’re trying to protect the kayfabe side of business (even though it’s well known) because the game wouldn’t be nearly as fun. WWE All-Stars looks to take that idea, spin it on it’s head and the result is that love-child I mentioned before.

As a kid who grew up watching “larger than life” athletes battle for the WWE Championship, I often sat in awe at all the amazing moves they pulled off on their opponent. Now amplify those amazing moves by at least 1000% and you get the carnage and chaos THQ has bottled in WWE All-Stars. Even non-fans of wrestling and the WWE should be interested in this game. I know when JDevL and I play All-Stars, we will be reduced to a state of oohs, ahhs, and giggles of ridiculousness. It will be complete mental insanity. OHHHHHH YEAAAHHHH!