The news that Duke Nukem Forever was actually coming out has been met with both excitement and skepticism. The game, which seems to have been in development for the last couple decades was a joke amongst gamers and developers alike and looked to continue to stay that way until Gearbox recently announced they’d taken over the game and would be releasing it in 2011. The recent trailer seems to confirm that the game is actually coming out but was it enough to fuel anticipation in the community or did its only purpose lie in stating “I’m actually going to be released in 4 months…no seriously look at the game play footage…guys I’m serious this time…guys?”

Setting Expectations in a Mature way

The trailer starts out like most other trailers with an ESRB rating and a breakdown of why it has that particular rating, which in this case is “M”. The irony is, the mature rating is derived not from the actual maturity the game exhibits but from a listing of items that are assumed can only be understood or accepted by a mature person, which according to the ESRB is anyone over 17. The inconsistencies of such assumptions are not inherent problems of Duke Nukem Forever, but should be noted anyway. The game, as expected, will be full of blood and gore, intense violence, strong language, mature humor, nudity, strong sexual content and the use of drugs and alcohol. It would appear that the black and white box that houses that information needed to be extended a bit or perhaps a subtle font size decrease was needed. Either way, the game earns its rating before any actual footage begins.

Once actual footage begins playing, we come face to face with a world that appears to have been inundated with violence, violence that appears to derive from space. The gravely voice of the announcer gives a quick account of the Duke Nukem legend, a legend that ends with his disappearance followed by a resurgence of the alien threat that Duke single handily defeated. It would appear that based on the trailer, our hero was indifferent to the destruction of our planet up until the point that the aliens tore down a statue of him and began abducting women, most of which appeared to be stereotypical archetypes such as catholic school girls and strippers. 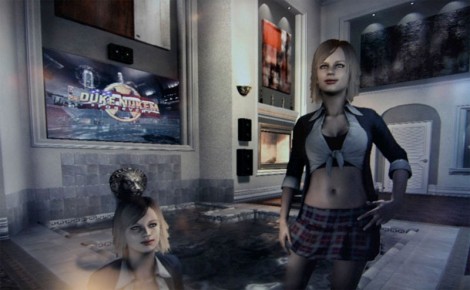 Religious affliation is a factor in your survival

Any semblance of plot is lost at that point, replaced with over the top theatrics and toilet humor. Those unfamiliar with Duke Nukem will soon find that his ambitions center around making obstacles and opponents explode and snapping off catchy (albeit over used) one liners. The disappearance of Earth’s sexually deviant female representatives have angered our hero, but his tone would indicate otherwise. It’s just another day at the office for Mr. Nukem. The consistent indifference that’s highlighted throughout made me feel less than secure that if such an invasion scenario did occur and a man like Duke was our only hope, we’d successfully survive to see the continuation of mankind.

In between footage, we’re assured how superior the game is with presumptuous phrases such as “You Want it” and “We’re Gonna Fucking Bring It”. While not indicative of the game’s content, these segues appear to enhance an assumption that the game’s 12 year development cycle was necessary in the production of a quality piece of intellectual property and weren’t the result of mismanaged resources and constant studio transition. The development cycle itself is mocked at certain points throughout the trailer, although such potshots did nothing to dissuade me from remembering the problems that plagued the game.

Personally, I felt that the trailer’s attempt at being over the top was muted at numerous points during my viewing. One scene in particular found our hero punching a large monster in the testicles, but the the testicles themselves were hidden being a conveniently located loin cloth. The impact of such a scene would have been far more potent had that particular set of testicles been unclothed, thus allowing full access to every blow administered by our protagonist.

Another observantion during the viewing of the trailer was the pixelated blurs placed over the reproductive organs of the many women seen galivanting about. The games demographic would appear to favor unadulterated access to nudity and the censorship may indicate a toned down approach to the series.  The violence itself was a bit muted as well, although an exploding pig did help to bolster the potential of the game in the opinion of this author.

The use of expletives was definitely lacking throughout, especially words such as “Cock” “Nuts” and “Ass Sandwich”. The fact that the game features a four wheeler type vehicle is good, but there was not enough footage of Duke driving this vehicle while doing other tasks, such as smoking cigarettes or throwing grenades. 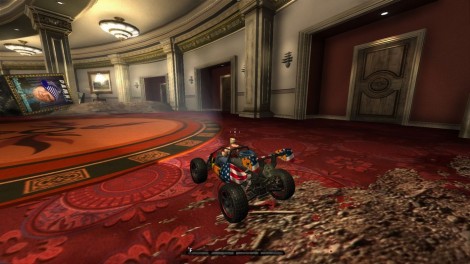 The American flag is always a great touch

I expected pooped pants upon the viewing of this particular trailer, but I did not approach anything close, not even small traces of fecal matter as the result of passing gas. Its looks like Duke Nukem Forever means business, but I’m not entirely convinced the heart is completely there. Artistic genius is hard to realize when only one scene involves a full sized car being thrown from a garage and not a single situation involves a man putting his hand up another man’s butt and using him like a puppet.