Since you’re a big fan of things that are, to paraphrase Agent J, the old busted-ness, here’s a quarter.  Call someone who cares.  If you can find a pay phone that is only $0.25.  Without making up a fake percentage, most of us out in the gamer-verse don’t give a crap about your misplaced over-enthusiasm for the crime that was perpetrated when Sega stopped making the Dreamcast or how the entire Resident Evil franchise was destroyed when Capcom introduced the groundbreaking play-mechanic of actually being able to put the ammunition you spent hours scrounging for to good use by allowing you to aim. 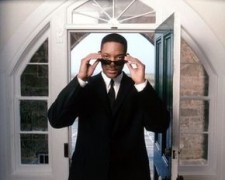 Wears the new hotness. Does not lament the old bustedness.

While I’m taking you down a peg, Mr. Records-Sound-Better-Than-Lossless-Digital-Audio-and-Oh-By-The-Way-Timeshift-Is-Awesome, let’s talk about your accomplice, the guy who whines about his gamertag getting suspended for lag-switching/using other exploits in multi-player to cheat or bitches about the new patch that prevents this behavior.  That guy is a massive, massive prick and not in the Enzyte way.  You’ll notice I said “cheat,” without any hint of guilt even though I idkfa’ed with the best of them.  There’s a reason for that and it’s simple: I wasn’t torpedoing anyone else’s gaming experience.  You might mention to Mr. Lag-Switcher or whatever other exploit-related name he’s using today that while your behavior is merely annoying, his is the kind of activity that if I (and probably every other multi-player out there) found out where he lived, he would quickly find himself the victim of grievous bodily harm in the form of extensive blunt force trauma.  Or an atomic wedgie.

Opinons CAN be Wrong

But let’s stay focused since very, very few people are going to come to the defense of a dirty, rotten cheater like the guy in the video above.  You, on the other hand, have allies across a wide spectrum of activities from coders to analog A/V aficionados to gearheads.  But this is a gaming site and, like Jadetiger-CG on The Horrible Show this week, you are wrong.  While System Shock 2 was a great game, BioShock was better and did not “ruin” the *.Shock games for anyone but you.  Fallout 3 and Fallout New Vegas are fantastic open-world games with great story lines, sound design and atmosphere…but saying that the crappy aiming system adds “authenticity” to the post-apocalyptic, semi-unindustrialized environment is like saying food poisoning adds “authenticity” to a trip to southeast Asia.  And even though they were released for the Dreamcast, which makes it a double-whammy, Shenmue and Shenmue II were about as entertaining as watching paint dry.

I’m not going to take the position that all things new and updated are better.  Pac-Man Championship Edition DX was entertaining but it’s never going to surpass Pac-Man/Ms. Pac-Man. The Legend of Zelda is a fantastic game and is not lessened in any way by the Ocarina of Time.  The original Galaga is clearly superior to Galaga Legions…but none of the earlier versions have tiny but vociferous pockets of deluded and craven followers endlessly defending them like Vampire: The Masquerade – Bloodlines because they weren’t broken, shitty games when they were released.  Just like Annie, your pretend-girlfriend from second grade that you only recently “broke up” with when she had her first child, it’s time to move on to greener pastures and consider new ideas like, oh, I dunno…maybe that the current generation of platforms might actually have improved upon one released in 1999?  Let it go, pal, because if you tell us how awesome Phantasy Star Online was and why it’s oh-so-superior to World of Warcraft one more time, we’re going to duct tape you to your bed and go Office Space on your Dreamcast. 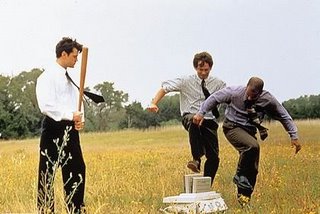 ...with pliers and a blowtorch. Oh yeah, we'll get medieval on your Dreamcast's ass.

P.S. – I’m not kidding about the duct tape.  Seriously, shut up about Earthbound.

2 Comments → Mail This: Your Classic Games Aren’t Worth Defending