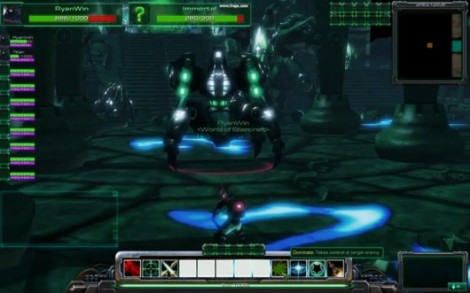 The best of both worlds?

With the incredible success of World of Warcraft, an MMO based on an RTS, the question has often been posed about whether Blizzard’s other huge RTS would ever get the MMO treatment. This week, World of StarCraft was revealed, but not in the way that most would have anticipated.

A video for World of StarCraft was uploaded to YouTube and featured on many gaming news sites. It was impressive to say the least. However, the most impressive aspect of the video wasn’t the fact that the game was in tangible form but that it was created by a modder using the tools provided for StarCraft II.

Controversy rose soon after when YouTube was asked by Blizzard to take down the video, and the internet took to the news quicker than either Blizzard or the modder, Ryan Winzen, could keep with. Blizzard issued its official response yesterday to state that requesting removal of a video potentially infringing on Activision-Blizzard copyrights is standard procedure. In the mean time, conversations were taking place at Blizzard to decide how best to handle the situation.

The storm has calmed a bit, and while the mod may not been shown as or move forward as “World of StarCraft,” Blizzard has reached out to Ryan and invited him to tour their office to meet with the StarCraft II team. They expressed their excitement about continued development of the mod and praised the mod-making community as whole. In the meantime, Ryan has also been offered an interview with Riot Games due to his amazing work with the mod. It’s nice to see level heads prevail for once in these gray areas around high profile intellectual properties.