The beginning of each new year offers a chance to reflect and learn from your mistakes. But forget life lessons, let’s talk about gaming lessons. We don’t want to repeat the same gaming miscues that we have in previous years. What video game New Year’s resolutions do you have this year? Play more? Play less? Play harder? 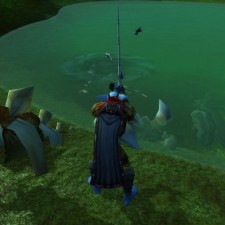 I'll be here when you all give in.

My video game budgets are getting out of control so I’m going to make a stand right here. No more than 10 wrapped/unplayed games in my collection at a time. Unless of course a bad ass collector’s edition comes out, those don’t count right?

Next up, I feel goals are important and while I’m unwrapping games left and right I’m going to need motivation. Let’s see if I can’t get my gamerscore up to 50k this year. Sounds like a solid round number to me, and if I don’t do it, I can blame WoW.

Speaking of WoW, I vow to get at least one Horrible Night member in the guild before I stop playing. All you haters are going to cave to my weekly conversations about my favorite locales for farming leather.

Good god, the idea of farming leather got me more excited than the first time I saw the underwear section in a JC Penny catalog. However, I vow not to be that person that gets sucked into your guild, for my first resolution is to actually complete the games I already own and there seems to be no such completion element to WoW. Frankly, I’m missing out on some good stories and am limiting my ability to play sequels and 2011 is going to be sequel and threequel heavy.

I also vow to stop referencing my gaming accomplishments to validate why I have yet to complete chores. Stopping alien invasions is commendable and a reasonable excuse only if it happens in reality. In all seriousness, I’ve been a bit lax on certain duties and am not helping my case that gamers can be responsible adults and still enjoy their favorite pastime.

Lastly, I plan to actually complete my video game pitch and send it off to a company. Its a long shot and I don’t expect much, but half my passion is getting my ideas on paper, even if those ideas become office jokes for actual game developers.

Well I plan to pull a reverse Ethan and START referencing my gaming accomplishments to validate why I have yet to complete chores. I have gotten far too many chores done in the last year, and my gamer score just sits there, sad and lonely, only being added to in little bits here and there.

The universe sent me a message when it forced my just out of warranty 360 to die a fiery red ringed death on Christmas Eve… That message was that I clearly don’t appreciate it enough. Both Beth and I bought 360 games for each other for Christmas… She bought me Rock Band 3 and I bought her Red Dead Redemption and the Gods said “NAY! Good sir… you will wait. You have not appeased the pantheon of gaming gods adequately with your sacrifices of time and productivity and have therefore been punished. You will fix your pitiful 360 Elite with your own bare hands and then and only then may you be granted a second chance. Use it wisely…”

I for one am not one to mess with the pantheon of gaming gods and pledge 2011 to keeping them well appeased. Maybe even contributing to there ranks if I have enough to devote to some super secret development in my coding dungeon… 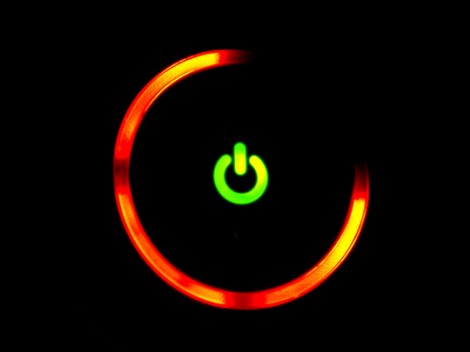 I think Justin’s hardest task in the new year will be getting someone else to join him on his quest to play WoW. Sorry, it won’t be me. The reason I talk so much crap about that game, is because it scares me to death. I stay away from all MMO’s because I know I’ll get addicted. So one goal is to continue to stay away from what could be the death of my marriage.

Another resolution that won’t sit well with the wife is that I want to play MORE video games. I just bought three games over the Christmas holiday (NBA Jam, Alan Wake, and Enslaved) and I haven’t even finished Horrible Night’s Game of the Year, Mass Effect 2, yet. Holy god, I have a lot on my plate and not a lot of time to eat.

That’s what IV’s are for, Coleman.

So I have to worry about the gaming gods judging my play time, too? I still will defy all of you and test the gaming gods with my healthy balance of WoW, other games, and a life outside of games. I will prove it is all possible!

I do think it’s bogus that the warranties expired for the RRoD. At this point, Microsoft should take them back until they release the Xbox 720. Our game prayers go out to you and your console, Alex.

If Ethan’s pitch doesn’t turn into a real game, we may have an new editorial section for the site on our hands.

If I have to make some sort of resolution other than not starting up WoW with JDevL (partly for the same reason I’ve never tried blow: I’m pretty sure I would love it), I’m probably going to be more methodical when I play games with little collectibles (i.e.: the feathers in Assassin’s Creed II) – instead of spending hours and hours backtracking and trying to figure out which collectible I missed and wishing I could find them so I could play another game. It’s like trying to prove the Caine Hackman Theory. I might keep a notepad. I will probably hide that from my girlfriend. I think that I’ll also give moving out of my comfort zone of shooters, action/arcade, arcade/racing and action/RPG a try, but I’m not making any promises.

If Microsoft’s next console is called the 720, they should probably just fire their entire marketing staff.

I may or may not have had a Google Spreadsheet for flags in AC 1 and for keeping track of minerals in Mass Effect 1 and 2. (And I’m still missing 3-4 flags…) 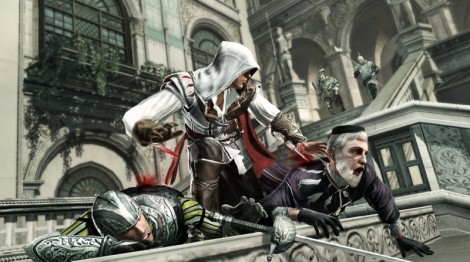 Tell me where the collectibles are

I actually had a notebook for devil combinations and items in Castlevania: Curse of Darkness and my game room currently has scribbled notes in reference to Penumbra puzzles, which made me think of another resolution and thats to not sweat the small stuff in games aka the obsessive tendencies you all mentioned. It’s really preventing me from moving on in games as I refuse to move on unless a certain task is accomplished.

I think you should just stop sweating so much in general. It’s kind of gross.

Speaking of sweating, I was over at (Ethan’s brother) The Prophecy’s house last night and he showed me that WoW clone he’s been playing, Runes of Magic. I think I was wrong about my fear of getting addicted, I just don’t like that style of game.

As far as budgetary concerns go, I vow to spend more money on video games this year. Which will be a stretch since I did buy the redesigned 360 in 2010 but I want to get more games. However, me getting more games means my wife getting more clothes/shoes/purses so we might not be able to eat this year. Sometimes you have to make sacrifices.

Eating, like water, is for losers. Winners spend all their money on gaming, cement blocks and semi automatic weaponry. 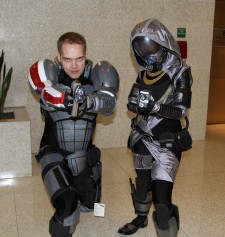 Maybe we should take a break from the Mass Effect

You know what else is for losers? Working. Earning a paycheck. I need to do less of that and more of the gaming. I have no problem filling free time with gaming. Damn it, I will go to WoW if I have to. Girlfriend might have to go too. I mean, it’s 2011, time to get serious. More money will be spent, more achievements earned and more controllers thrown. My queue of unplayed games (especially the XBLA games sitting on my hard drive right now) will be unmercifully slaughtered. This of course is in preparation for being able to devote my time to replaying both Mass Effect games at the end of the year to allow for seamless and gapless play into Mass Effect 3, which I intend to spend several months on, playing forwards, backwards and perhaps in Spanish.

Oh yeah, and that sweating thing. I should cut down on that too.

I spent an hour and a half last night trying to find the four feathers that I am missing. If the controllers weren’t $50 a pop, I probably would have smashed one into pieces against the floor in frustration. Instead, I kept my resolution and started Brotherhood. I will be employing a spreadsheet.

Ethan, you forgot one thing that you should spend money on: alcohol. It fuels emotional rages (see above regarding the controller) and helps with things like coordination and spur-of-the-moment 2,000 gamer point block purchases.

I’m just glad we get the chance at the beginning of every year to get our priorities in line. Of course if anyone breaks any of these resolutions, expect a Wizardtrain to come bursting through your door.

(And if Ethan breaks his resolutions I will personally attack all of his Minecraft penis towers.)

Be humble in Minecraft this year, for hubris only begets tragedy.

It looks like we are fully prepared to take on the year in video games 2011. Whether we come out on the other side with friends and family intact remains to be seen. But what does it all matter when the world is just going to end next year anyway?

Join the conversation in our comments:
What are your gaming resolutions this year?