Space exploration has gotten pretty dark in video games as of late. From Dead Space‘s grotesque necromorph infestations to the never ending battles that plague the Halo universe, things just aren’t as happy go lucky as they used to be. Fortunately for gamers, Astroman has arrived just in time to inject a little bit of light hearted fun into outer space.

Luckily for Astroman, his hippie parents gave him a name that would eventually become relevant in his future occupation. We join Astroman as he crash lands onto an unknown planet deep in space, his ship’s necessary components scattering across a small galaxy upon impact. Your goal is to guide Astroman across the nine planets of that particular system and locate the parts he needs to return home. Fortunately for him, the explosions left the pieces intact enough to stick right back on the ship. 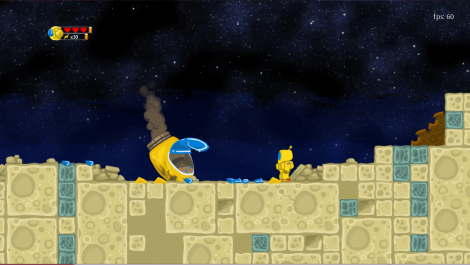 At least I packed my bright yellow suit

Back story is pretty light here, which makes sense as Astroman is a throwback to a time where gameplay was the sole focus of titles and everything else came second. Astroman starts out with the ability to jump and shoot a laser gun, but can eventually acquire enhanced jumping capabilities and a rocket pack to aid him in navigating levels as well as health upgrades that allow him to take more damage. Comparisons to Metroid are understandable, especially with the upgrades one can find throughout and the necessity for backtracking. However, unlike Metroid, combat takes a back seat to platforming in this title.

Controls can make or break a game like Astroman and is something that is never a problem in this game. Movement is tight and any issues I had were a result of my actions and not the control scheme. The simple design was a breath of fresh air and made for quick mastering of the Astroman character’s movements.

The beginning of the game is a bit slow and the levels consist of the usual tricks of the platforming trade. Enemies follow patterned movements and environmental hazards such as spikes and lava stand to hamper your way. Things get more interesting as you progress though, and once the upgrades have been acquired, the game starts to get challenging and a lot more fun. I especially liked how the upgrades were used in conjunction with each other to overcome some rather intimidating obstacles. Checkpoints can be found throughout  as well, which takes away the frustration of having to replay whole levels if you happen to die, which I did quite often. 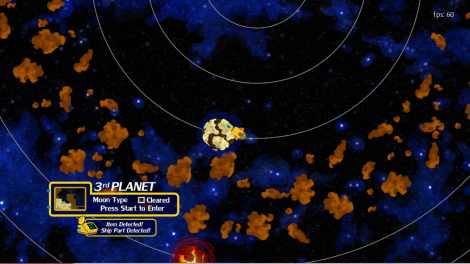 I usually just give up when confronted by asteroids

While locating upgrades for Astroman allows for further exploration in each of the individual levels, ship parts allow for further navigation through the galaxy map, which acts as your level select screen. For example, access to levels 4-6 are blocked by an asteroid belt that requires a cannon, which can be located in one of the three levels available from the beginning. I thought this was an interesting touch and a good way to pace the game, although the controls for the ship reminded me of Asteroids and I hate that game with a passion (no one’s problem but my own).

Enemy design is pretty standard and looks to be inspired by the Metroid series quite a bit, which made me roll my eyes a few times. My favorite was a rock spitting aardvark because it just looked so out of place, but some of the larger creatures took me by surprise, even if they weren’t particularly difficult to avoid. Enemy placement is always key to a platforming experience and they appear in places that play off the environmental hazards very well. At any given time you can shoot a rock bunny, jump over aardvark projectiles and finally avoid spikes and a giant rock worm to safely land inches away from a bubble shooting giant fish. It can get pretty crazy and there were only a few times that I was annoyed by the enemies. Shooting them isn’t very fun at all, which hurts the game at times because combat is methodical, not exciting. 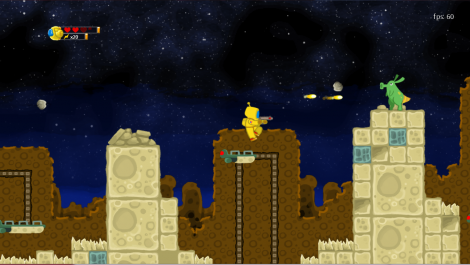 Levels come in three flavors (moon, night time and lava) with each offering up a particular challenge such as darkness in the night time theme and well, lava in the lava theme. A few additional themes would have been nice, but the creators took care in adding different  challenges to distract from the recycled backgrounds. The size of the levels were impressive and chock full of alternate paths and secret areas. There is a real feeling of accomplishment after making it through a difficult portion of the game, however a few additional boss fights (there are only two towards the end) would have been nice. It is also a bit difficult to determine what levels require backtracking since everything looks the same and there isn’t any sort of level map to use when trying to find areas that were missed.

The graphics are bright and reminded me of the work of a children’s book artist. This was a nice change of pace for me since blood and guts inhabit much of my playtime. Everything looked sharp and simple, which is never a bad thing. This is definitely the kind of game that a parent wouldn’t worry about playing with kids, unless of course they had to explain why Astroman was destroying the native species of the planets for no good reason. If this scenario happens to occur, tell your kids that’s what happens when you mess with America. 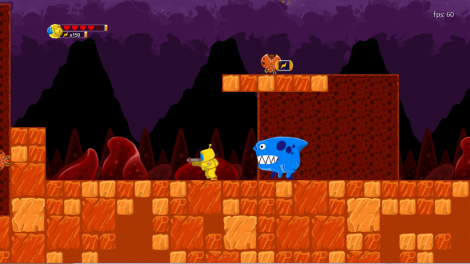 Solid as the moon

There’s nothing in this game that makes it stand apart from other platformers, but I don’t believe that was StarQuail’s goal in creating this title. Astroman is a very well done indie title whose creators respect the platformers that paved the way for games today. While the game can get a bit monotonous at times, it’s a good effort by a small indie developer and 240 MP ($3.00)  isn’t a bad price to pay for a challenging 4-6 hour game. I am excited to see whats next for StarQuail and I recommend picking up Astroman if you’re light on cash or tired of the billion puzzle games that infest the Xbox Live marketplace.