Meanwhile… we’ve actually been playing games. Each week we recap our recent gaming experiences and tell you what we’re looking forward to, so you can use your time more wisely than we have. The final Meanwhile… of the year has arrived. We reflect a bit on 2010 while looking forward to the games that will carry us through the holidays. 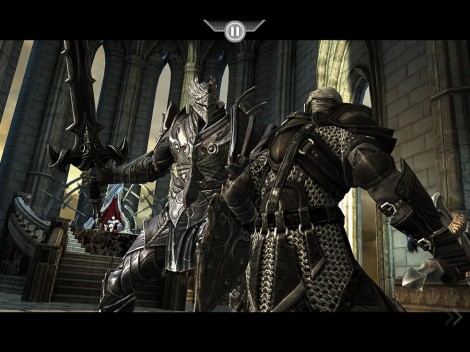 You are next, God King

JDevL
What a random year for such a resurgence in gaming for me. It all started with the growing trend of quality games coming out right after the holidays. Capped off by the high of Mass Effect 2 that I have yet to come down from. I wouldn’t say this was a great year for games, but the release schedule was balanced much more so that I was always playing something worth playing. It seemed like their were fewer exceptional games out there, but there are a lot fewer failures as well. Then Horrible Night came along and just fed my passion for the industry even more. I loving every second of it.

World of Warcraft is all I’m focused on through the beginning of the year, no surprise there. What did surprise me is that not only am I playing with Coopopolopolis’s brother, but now I’m playing with two of his brothers. Think we can convince a third? Haha. I wouldn’t do that to him. Downtime is now entirely focuses on Infinity Blade, thanks to streetalchemist’s intriguing review. It’s just the right mix of depth and repetition for a mobile game. Nicely done, ChAIR.

Colefacekilla
Big changes are happening in my life right now so I don’t know how much time I’ll have for video games in the weeks ahead, but that won’t stop me from getting a little Mass Effect 2 time in. I don’t know how much more of the game I have left, but I’ll be perfectly fine with playing it long into the new year. I played a lot of great games this year but the Mass Effect series has been like no other. Mass Effect 2 is easily my favorite game of the past year. Being on a budget and not being able to buy everything I want when it comes out, I have to mention Batman: Arkham Asylum. I realize it came out in 2009 but I didn’t get to it until earlier this year. I didn’t think it would be topped as the best game I played all year, but then again I didn’t think I’d get a chance to play Mass Effect 2.

Horrible Night has reignited my passion for video games and I hope it fans your flames as well. I can’t wait for you to see what we come up with next.

Wizardtrain187
I am dedicating myself to the completion of Fallout: New Vegas this week and next. Safe to say, it’s my favorite game of the past year, however some of my most memorable gaming revolved around finishing up the Uncharted series in back to back weekends. The dedication of Naughty Dog to improving a solid game and cementing the series as a legit franchise was nice to see and the first of many surprise titles for me in the scope of my horror centric gaming. I went through many games this year and hate to leave anything out, but would like to go and mention Minecraft one last time. Not sure what it is about you but you got me….you got me.

Its been fun writing for the site and am looking forward to next year. I know we have some cool ideas in the works and I’m excited to keep on sharing my cynical and often times sarcastic opinion with all of you. 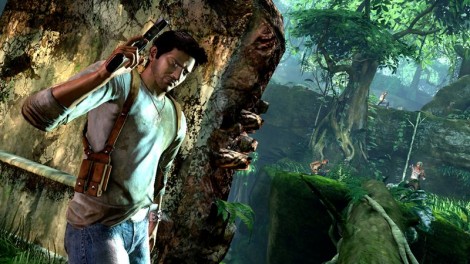 Yep, we are still talking about you, Drake.

GiffTor
Even though I’ve got it listed in my “Everyone said this game was great but I’m not interested” list on Giant Bomb, I’ve been playing Assassin’s Creed 2 obsessively (aka: GiffTor’s normal style of play); since I’m taking 4 of my remaining 6.5 days of vacation between Christmas and New Years, I should be able to complete that and the Insanity achievement on Mass Effect 2. Mass Effect 2 was probably responsible for almost 30% of my gaming this year, actually, if you include some last-minute leveling up in ME1 while staring longingly at the still-shrink-wrapped ME2 that I promised I wouldn’t open until I had the “Insanity” achievement on ME1. Borderlands was like an in-between girlfriend: it ate up a lot of hours, was entertaining to play with and fun to look at, but ultimately, didn’t have the substance to keep me entranced once a game with something other than good looks and a passable sense of humor came along. Halo:Reach will probably get some more play time, I imagine my mom will want to play a Colts/Redskins Best-of-Seven match on Christmas Eve and I’m sure I’ll download 20GB of Rock Band-related songs and that bandwidth-stuttering purchase-fest will have nothing to do with alcohol. I will also spend time wishing that Mass Effect 3 were out so that I could play it over the holidays and I will consider seeking treatment for my Mass Effect-related Fan Boy issues.

I’m going to sing last-minute praise to DeathSpank, Toy Soldiers and a rhythm game I downloaded right after I bought my XBox, Boom Boom Rocket, because it has Christmas songs and everyone from me to my semi-senile nana, can play it and get pissed off and scream “BULLSH*T!” at the screen together. Because Christmastime is about togetherness and family. Speaking of which – Merry Christmas, everyone.

I think he's looking for Bender

streetalchemist
This last week of gaming for me, as well as the rest of my gaming for the year has actually been somewhat unexpected due to my want to get it on some holiday deals. Firstly, I picked up the Humble Indie Bundle #2 or $5, as you can pay however much you want for it. I picked this up mainly because I’d been wanting to play Machinarium for over a year but didn’t want to pay over $20 for it. The bundle also includes Braid and some other cool looking original games, so I highly recommend trying those out.

Next, I picked up Minecraft because I knew I wanted to play it eventually and the Alpha period was just about to end which meant prices and free upgrades were going away. I’m both glad and sad that I started playing it because at WizardTrain wrote a while back, the game is hopelessly addictive. Fun as hell! But hopelessly addictive.

Otherwise for the rest of the year I’ll likely be focused on beating Castlevania: Lords of Shadow, and grinding levels with my knight in Infinity Blade. I’m hoping to make a lot of time for gaming next year to finally get through Bioshock 1, Final Fantasy XIII, and Arkham Asylum. Happy holidays everyone, even if it’s some weird Elf holiday in Azeroth… weirdos…

Pixelmixer
In 2010 I think my most played game was Modern Warfare 2. Call of Duty: Black Ops is quickly becoming a close second. Not because it is a better game by any means, but because it is newer. I usually end up playing Black Ops and wishing I was playing MW2 instead but rarely do I ever switch back. I have a feeling that when I do decide to go back I won’t want to play Black Ops anymore. So, for this holiday I plan to play some extra Black Ops and at some point take the plunge back into MW2. On the mobile front I’ve been giving Infinity Blade a solid run for its money and it isn’t disappointing. I don’t normally pay more than 2.99 for anything on the App Store, but this one was special enough that I thought it deserved a shot. The game is very repetitious, but that repetition fits into the “storyline”. They are going to have updates soon, so if that comes sooner rather than later I will likely pick that up for several extra hours of gameplay. 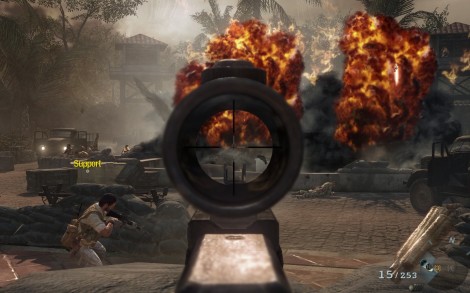 The most popular of the Ops

Coopopolopolis
I actually played some co-op Resistance on ps3 over the weekend. It made it a little more fun, but I’m still underwhelmed by that game. I think i want it to be more of a horror game than it is. I just had some expectations set after having a friend tell me it scared the crap out of him and its not living up to the hype. Anyway, that’ll probably be the only significant gaming i get in this week. With an anniversary, daughter’s birthday, and the holidays all in 1 week it doesn’t leave much room for anything else. I did just pick up Spider on my iPhone since it was on sale for $.99 so I might check it out here and there.

BlueAwesome
I had Christmas early with my family this weekend and ended up with Call of Duty: Black Ops and LEGO Harry Potter for my 360. I intend on playing the hell out of those this week while my wife works over Xmas. I’ve also been playing Halo: Reach online more than any other Halo game, and I think it’s because it is matching me with players of the same (low) skill level better. I’ve actually won some matches!

I’ve also been playing Infinity Blade and Braveheart on my iPhone. Braveheart is a quirky action-rpg that’s only 99 cents and a lot of fun.

Robeque
I just started playing Metroid: Other M this past week and am probably about two hours into it. So far I’d say the game is pretty underrated. People’s reviews have been kind of harsh. I think it’s really well done. The controls can be a little bit awkward at times switching between 3rd and 1st person quickly. If you can train yourself to get face the right direction in 3rd person before making the switch it’s not bad at all, though. Overall I’m impressed with the quality of the game so far. I’ve also been playing Need For Speed: Hot Pursuit off and on here and there and am still loving it. I’m getting into some of the ridiculous cars now and it’s just sick.

EndlessBen
I’m having another crazy week this week, I don’t think I’ll have time to get to much gaming with work and the upcoming holidays. When things calm down, I’m looking forward to getting back to the Uncharted series and more AC: Brotherhood multiplayer. And just maybe, Christmas may leave me with some new games to add to the list.