A few months ago when Epic Games’ Unreal 3 Engine tech test “Epic Citadel” was unveiled at an Apple event I remember thinking it was way too good to be true. There was NO WAY an actual game could look that good on a handheld device that wasn’t dedicated to gaming, let alone a phone. I downloaded the app as soon as it was available and was blown away. The controls were smooth, the graphics with mind-boggling, and the potential was limitless. All I or anyone else that had seen it could say was, “OMG I wonder what that’s going to be like as an actual game?!”

This game combines amazing Unreal 3 Engine graphics, simple yet fun gameplay, an engaging albeit short plot, promise of major free updates, and an immersion that truly shines even on a small iPhone 4 screen. 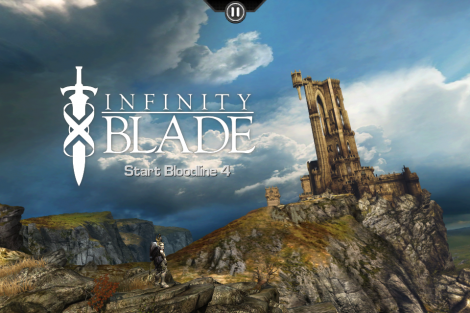 This feels familiar... but I'm ok with that.

Every Knight Needs a Reason to Fight

So the story of Infinity Blade works extremely well for a mobile device. The story is one of an evil God King basically picking on a family of warriors and you play the latest in their bloodline. The awesome part is, every time you get to him and he slaughters you, you then play as your son, decades later, trying to avenge your father. Every time you play through the castle there are slightly different and even more powerful enemies, so even though it’s the same short path to the God King, there are choices to be made and it doesn’t get old. Each battle is short enough to fit into the “casual game” category, and with the iPhone’s multitasking, it’s easy to start up, win a battle, and get back to your email in a minute or two.

On the iPhone 4 where I’ve been playing the game the graphics are truly stunning. I can’t really think of a comparison other than that the graphic quality feels like it’s somewhere between the PS2 and the 360. By FAR the best graphics I’ve seen on a handheld device, including the PSP. Unfortunately for some reason when I take screenshots while playing, the anti-aliasing doesn’t appear to show up in the photo, so the actual graphics look even better than the images in this article.

Even Jakob Nielsen Would Say This is Fun 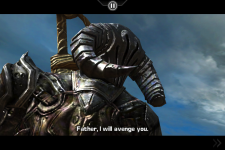 My helmet is epic win!

The gameplay in Infinity Blade is flawless, as it’s possibly the first time I’ve played an iOS game and not complained about the controls at least a little. The tutorials in the first parts of the game are extremely helpful and the you get used to the unique attack system very quickly. This game, as the name suggests, is mainly a sword fighting game and the responsiveness and ways to use the sword are out of this world.

As far as the action RPG-ness of the game goes, you level up your character and equipment throughout the game in a typical fashion, and each descendant in the bloodline starts with the level and equipment that the father had when he died. The eventual hope is that you will be able to gain enough strength over the years to defeat the God King, and then anything that may be even more powerful than him.

Another great thing that Epic Games has put into Infinity Blade is thoughts for the future. Right now, this game is an excellent single player game. In coming (free!) updates there will be new equipment, an entire new dungeon with even stronger enemies, and possibly the most important, multi-player capabilities. Yes, you will be able to sword-fight with your friend half-way around the world all while drinking your favorite fru-fru coffee beveage at Starbucks, or much more likely, your co-worker three desks down during a boring conference call. 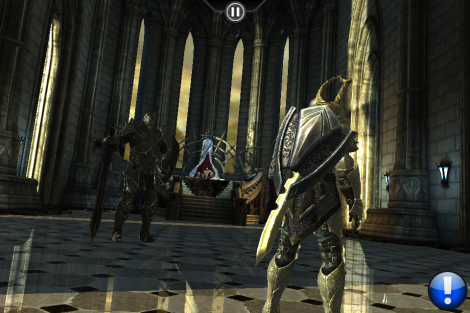 Shiny floor! Hey he doesn't look nice... or have a reflection!

I really hope there are quite a few iOS games built on Unreal 3 now because Epic and ChAIR have proven without a doubt that it can be pulled of extremely well. I have no idea when I’ll ever play my DS or PSP again, well, at least until the 3DS comes out (and I HAVE to play Nintendo franchises on it…). Basically, there is no reason for you NOT to drop the $5.99 right now. In fact, the only reason for the 4 out of 5 is not knowing how good the multi-player will be and wishing for a slightly larger castle. So stop reading this article, boot up the app store on your iPhone, and download Infinity Blade immediately. Oh, and the $5.99 will get you the universal app which will work just as well on your shiny new iPad as well as all future updates for free, so yeah, convinced yet? If not I’ll sick the God King on you.

3 Comments → Infinity Blade Review: This Changes Everything, All Over Again